Glenn Cardier and The Sideshow 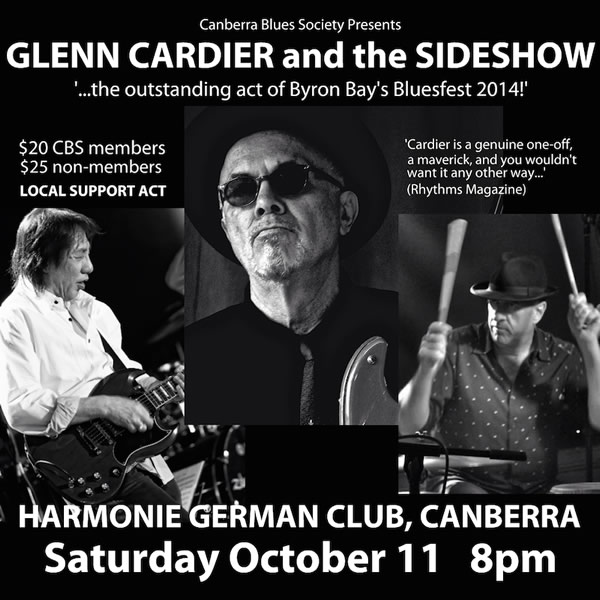 Glenn Cardier & The Sideshow will be bringing their ‘Stranger Than Fiction’ tour to The Harmonie German Club on Saturday 11 October 2014.

Joining Glenn is Rex Goh who is arguably Australia’s ‘most heard’ guitarist & on drums, Dave Fester who tours year round with some of Australia’s finest musicians.

Glenn A Baker (Author & Rock Historian) states. ”Glenn Cardier has been writing & performing moving, insightful, powerful & important songs for more than 30 years. His intriguing evolution has given us something like a cross between John Prine & John Lee Hooker.

With captivating presence, a commanding vocal style & a gloriously perverse point of view that produces songs which take firm hold & linger long, he comes dangerously close to being certified as a national treasure…”

Bluesfest 2014 review – Noel Mengel, Courier Mail/Herald “One of the delights of a festival will always be the great bands you find on outside stages. Yesterday one of those was Australian songwriting veteran Glenn Cardier with his supertight band in a packed Juke Joint tent. Glenn Cardier delivered a brilliant performance with his Band the Sideshow.”

Cardier will feature songs from his latest releases & surprise all with a couple of well selected covers!
Support act is hard-working, talented local band The Guitar Cases These guys can play & sing, as well as write good songs and execute them well.

Kara Youngentob - 1 hour ago
Alison Procter, it depends on how many people interested. Ideally, somewhere in the 750k range. View
Ben Hall - 2 hours ago
Lindy Hall we should buy this View
Mark Bradley - 2 hours ago
Alison Procter the million dollar question. Or part thereof. :). Given we are not quite one year into a mortgage, there's not... View
Opinion 20

PE TE - 1 hour ago
Sean Bishop but the Uber rapes have increased View
Kim Rumble-Kozjak - 12 hours ago
Jacqleequack it was all good fun until the two hour wait in the cab line, in stilettos, without a jacket in -2 🥶❄️ View
Food & Wine 23

Hugo Walker - 2 hours ago
Penny Ford But isn’t he rich, famous and self-entitled? Surely that should persuade the authorities to cave in to his tantr... View
Pia Kivela - 5 hours ago
Personally we are in a pandemic so we should not be having this tournament View
Milenko-Slavenka Jovanovic - 17 hours ago
Penny Ford Djoković is not just one of the other elite players, up to a few days ago, he was voted the players’ representa... View
News 29

Lisa LaMaitre - 2 hours ago
No-one pays attention to crime in Canberra until it impacts them! We closed a Gungahlin based business over 10 years ago afte... View
Property 26

Colleen Alchin - 11 hours ago
This situation is appalling! Forty minutes from the national capital and you need to buy bottled water to drink and wash clot... View
Tegan Gilchrist - 18 hours ago
Amy LD and the clothes!!! Swapped out all out white sheets for greys. Blazer ruined. I now fill up bottles of water from my p... View
Community 1

Lifeline Canberra - 11 hours ago
We love Sarge! Thank you for continuing to support the vital work we do in the Canberra community. Bring on Jan 30! View
News 6

dolphin - 21 hours ago
excellent news. will be good to have some community playing fields for Gungahlin.... View
News 22

Ben Keaney - 21 hours ago
Also if they are not in the numbers that the anti-brumbies say, what do you think a maximum brumby population should be? Sure... View
show more show less
*Results are based on activity within last 7 days

The victim of an attempted bag-snatch outside Belconnen Mall last Sunday (10 January) says her impression of Canberra as a...
Property 27

@The_RiotACT @The_RiotACT
A big, green mixed-use development planned for Gungahlin Town Centre may be powered completely by the sun and charge vehicles in the basement https://t.co/JqLOjLL10K (54 minutes ago)

@The_RiotACT @The_RiotACT
Planning on hitting the beach? A hazardous surf warning has been issued for the South Coast, with waves up to three metres expected today & tomorrow https://t.co/F8pq5syJ8u (3 hours ago)