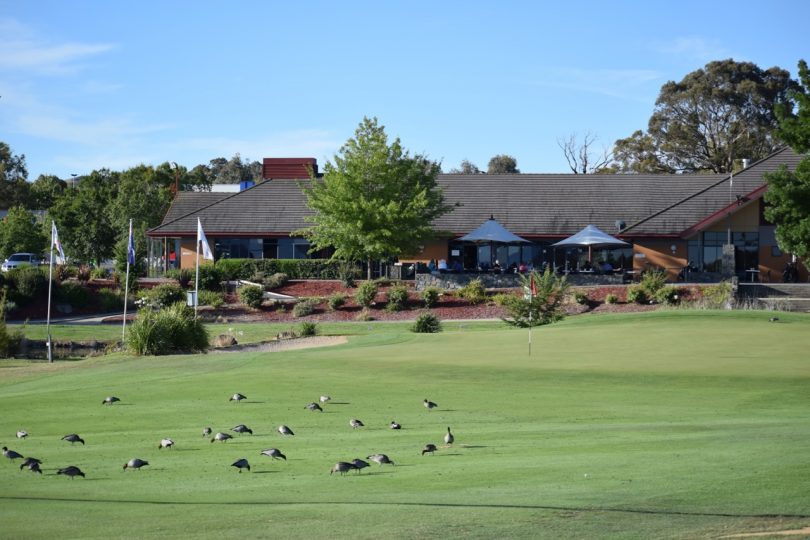 Gold Creek Country Club is embarking on another redevelopment plan and is hoping to win community support and incorporate community ideas.

The club has invited the Gungahlin community to help ‘re-imagine’ almost half of the site, about 49 hectares, which it says may no longer be required as a golf course.

In 2014, the Konstantinou Group owned club wanted to subdivide land on Curran Drive in Nicholls and sell the site’s commercial tenancies in order to clear debt and fund a sporting precinct including an indoor sports centre and tenpin bowling alley. The 18-hole golf course would remain intact.

The club said in a letter at the time that the golf course operations operated at a loss of over $500,000 a year and had required a subsidy of about $4.5 million since 2006. The Konstantinou Group bought the site from the ACT Government for $3 million in 2005.

Director of the Gold Creek Country Club Harry Konstantinou said in 2014 that the company had invested about $10 million in the site, including subsidising each golf club member about $1000 each year to play on the course.

Yesterday (6 April) Mr Konstantinou said in a statement the community was invited to fill a ‘blank canvas’ with ‘new and innovative ideas’ in what he said was a genuine consultation program.

“We have had many ideas for the golf course over the years. This time we decided to ask the community first,” he said.

“A review of the golf course and where we want it to be in five, 10 or 15 years has led us to move towards a compact 18-hole course and a more attractive holding options for many people. This has meant we have land that we may no longer need as a golf course. This has prompted this community consultation.”

The strategic review looked at the golf course’s viability and position in the market.

“We are looking for ideas about community spaces, event areas, commercial spaces and housing options for the area. Over the next few months we will be hosting events, door knocking our near-neighbours, running an online survey and generally encouraging people to have their say,” Mr Konstantinou said. 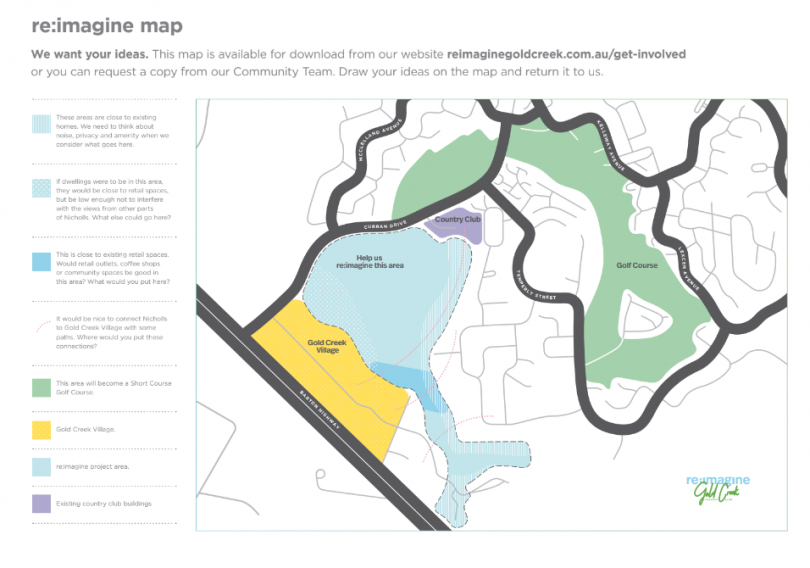 The ‘re:imagine’ map that the club wants the community to use. Image: Supplied.

After the consultation process, the club will lodge an application to vary the Territory Plan to change the use of the land from a golf course.

The club said that founder of local media brand HerCanberra, Amanda Whitley, would chair a People’s Panel to sift through ideas and work with the ‘re:imagine’ team to ensure the views of the local community were reflected in future proposals for the area.

“I am pleased to chair the People’s Panel, as an integral part of this community consultation program. I don’t live in Gungahlin and I have no vested interest in the outcome; however, I am committed to ensuring the community has input into the development of our city,” Ms Whitley said.

“The ‘re:imagine’ project provides a unique opportunity for the community to have their say at the earliest stages of a project’s development. I look forward to hearing from the people of Gungahlin”.

Mr Konstantinou said the community would have plenty of time to develop their ideas and contribute to the process.

“We are not in a hurry, we see this as a long-term plan that may take 10 years to achieve. However, we wanted to start early in listening to the community, so that we can be sure that the legacy we leave reflects the local community values,” Mr Konstantinou said.

Mr Konstantinou said one of the first community events was a free family movie night out on the driving range on Saturday 21 April, when people could see the site and ‘re:imagine’ the possibilities.

“The movie night is a chance for the people of Gungahlin to see the golf course in a different light; to encourage the local community to see the space as a location for new community areas,” Mr Konstantinou said.

The community can find out more by visiting the re:imagine website www.reimaginegoldcreek.com.au

WHAT IS THE CONSULTATION PROCESS?

re:imagine is a consultation process which will be run in three phases:

After this, we are aiming to submit a Development Application. This will not be the end of the conversation though. We will continue to consult and work with the community as the project continues. This is a 10 year project.

During the above process, we will be lodging an application to vary the Territory Plan to change the use of the land from a golf course – this is a first step in creating the future we collectively imagine.

Jodie Roberts - 6 minutes ago
Julia McFarlane what are you two up to this weekend? This looks lovely View
Jo Smith - 3 hours ago
Kathryn Sequoia it sure does K View
Sayward McKeown - 10 hours ago
Nathan O'Brien yes!! This looks awesome 👏 View
Sport 5

Bob Jones - 12 hours ago
Deb Wheare And Lynne Meredith... I've heard because of the more right someone who identifys as being an Aboriginal or Torres... View
Kev Martin - 21 hours ago
I find If you stop breaking the law, you don't get locked up View
Deb Wheare - 1 day ago
Jacob Torresan face palm View
Community 12

During the 'unprecedented' year we all experienced in Canberra during 2020, lots of new words and emotions entered my vocabulary....
Food & Wine 110

@The_RiotACT @The_RiotACT
This remarkable seafront complex for sale near Narooma is your chance to purchase a unique residence with optional tourism business opportunity https://t.co/Fze10GhLLY (39 minutes ago)