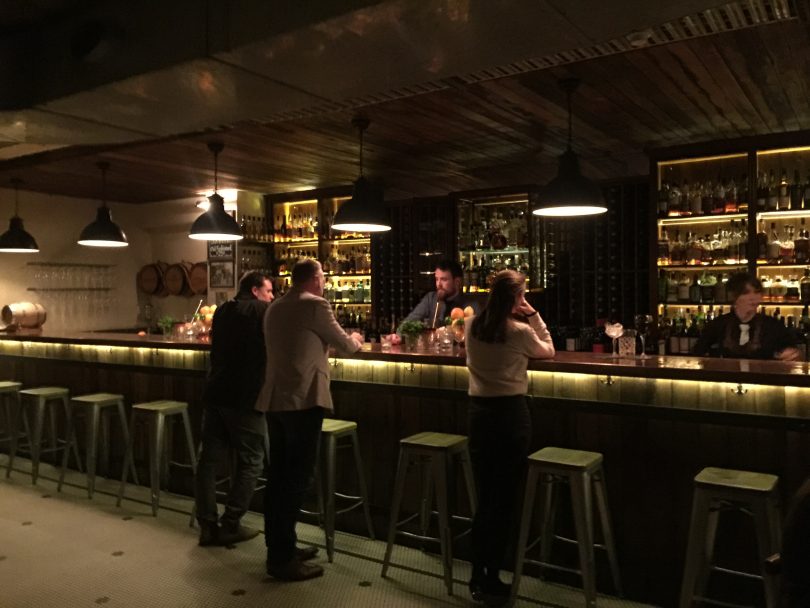 Molly, the cult city speakeasy with no address, is closing down. However, reports of her passing may be premature.

The whisky bar, situated in a mysterious location found only by its GPS coordinates and boasting a line of Prohibition-era cocktails, may have to leave the building, but word is it may rise phoenix-like in another venue.

When and where is still a mystery.

The current basement venue is facing the wrecking ball, four years after Antony Arena, Dean Brown, and Lorenzo Focarile transformed it into a Prohibition-themed bar for an intimate, destination, adult experience.

Antony is keeping pretty coy about Molly’s future but if the stars align it will be a bigger and better place, with new interesting spaces, more music such as the present live jazz, and a little food to go with a quiet drink.

“The only way we are ever going to do this is if we can make it better, more interesting, and improve on this really cool little place,” Antony said.

“I don’t want to lose that intimate mood or feel. I don’t want people to think we are going to stuff it up and make it too commercial.”

He said when Molly first came on the scene it ‘just went off’.

“It became a lot of people’s favourite really quickly because of its authentic nature,” he said.

“It was one thing we were quite conscious of, you can’t create a concept like that and have it be a novelty because you get over it really quickly.”

He said the most interesting thing was the way it attained cult status and resonated with people.

“The thing I was shocked by was the amount of comments to the post saying we were closing. People were genuinely upset that we were shutting it,” he said.

Molly will host a final hurrah at its current location on October 6 and 7 from 4 pm, with a range of good music and drinks, guaranteed to make it an unforgettable night.

As for her new home, we may know by Christmas, but don’t expect to see Molly flaunting herself. You will have to keep a lookout for those magic numbers to find her again.

“It’s all part of the sense of adventure,” said Antony. “You’ve got to find the joint first.’

What’s your favourite memory of Molly? Share it with us by commenting below!

One Response to Good golly, Molly’s moving on!
Filter
Showing only Website comments

Sad to hear but if they can move to another venue soon they might be able to keep the feeling alive.

Daniel Duncan - 3 minutes ago
we are not out yet stop the fake news. View
Darcy Ryan - 4 hours ago
The only thing that kept people going during the lockdown was the federal government payments. View
Lifestyle 23

Simone Moss - 5 minutes ago
Sarah Moss,maybe you need some alpacas 🦙 View
Lucy Coote - 1 hour ago
Tom Gilbert uhhhhh I mean at least we wouldn’t have to mow the grass… View
Amanda Robyn - 1 hour ago
Suzanne Feeney. See. Alpacas is what you need. 😉 View
Sport 5

Peter Ball - 4 hours ago
Gai Wil - So given that logic, a 5 kmh limit would be OK with you yeah? I mean, as you stated if you don’t speed (regardles... View
Peter Ball - 4 hours ago
At least I feel safer now, when crossing the road while updating my FB profile. 😜 Before the new limits, it was like Russi... View
Greg Myat - 5 hours ago
Oh damn! Can’t speed there now because of a pesky camera! 🧐 View
News 2

@The_RiotACT @The_RiotACT
Sally Hopman reckons there's no need to #write yourself off if you are struggling with #computers. Just pick up the heaviest thing handy - ancient Remington #typewriters are always good - and take aim at the laptop https://t.co/5SoyRLLAhU (21 minutes ago)