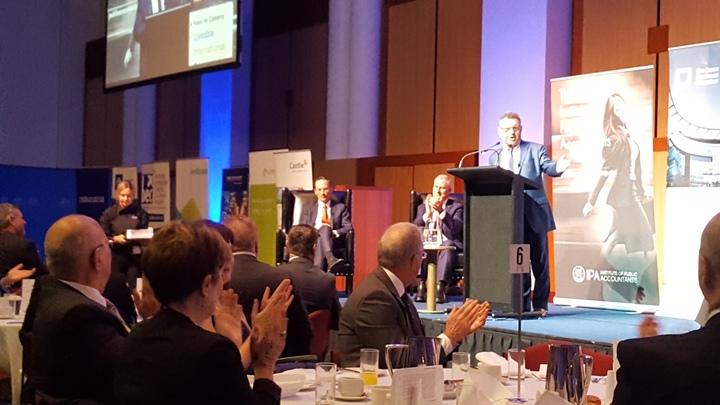 Small businesses have done well but Canberra has missed out on infrastructure spending according to speakers at a 2017 Federal Budget Breakfast in the Great Hall of Parliament House this morning.

“The ACT has been overlooked when it comes to the big infrastructure spend,” Labor’s Shadow Assistant Treasurer Andrew Leigh told the 500-strong audience this morning.

“So far Canberra has no special programs but a lot of programs that could have an adverse impact on our great city.”

Federal Minister for Small Business, Michael McCormack, spoke first at the breakfast which was hosted by the Canberra Business Chamber and the Institute or Public Accountants.

He emphasised the Federal Budget’s benefits for small business, particularly extending the $20,000 instant asset write-off program to June 2018 and a $300 million incentive to the states and territories to cut red tape.

“Last night’s was a budget for all Australians,” Mr McCormack said.

Issues to come under the spotlight at the breakfast included cutbacks to Catholic school funding in Canberra, university funding cuts, measures to address housing affordability problems and moves to increase the Medicare levy to ensure that the National Disability Insurance Scheme is fully funded.

During questions from the floor, concerns were voiced about funding cuts for Canberra Catholic schools which have been confirmed despite an overall $18.6 billion increase in education funding over the next 10 years.

“Not a single dollar in the next 10 years goes to a single Catholic school in the ACT,” said Catholic Education Office Archdiocese of Canberra & Goulburn director Ross Fox from the floor.

The 2017 Federal Budget commits to a massive $75 billion spend on infrastructure but the ACT is the only State or Territory to miss out – receiving just $1 million for the Pialligo Avenue Duplication planning stage and $500,000 for the Monaro Highway planning stage from Canberra Avenue to Hume.

“It is disappointing to see no significant new infrastructure projects for the ACT in such a large infrastructure-spending budget which invests heavily in all States and the Northern Territory, but notably excludes the ACT,” Canberra Business Chamber CEO, Robyn Hendry said.

“This fails to recognise the major role the ACT plays in economic development in the broader region.”

“Ninety-seven per cent of businesses in the ACT have less than 20 employees, and those with less than $10 million in turnover will welcome the extension of the $20,000 instant asset write-off provision,” Ms Hendry said.

“In the recent Deloitte SME Survey Chamber members identified skills shortages and red tape as significant barriers to growth, and it is pleasing to see that the Budget contains measures to alleviate these issues.”

Catchup on our LIVE coverage from Hotel Realm: Andrew Sykes from RSM Australia dissecting “The Rocky Horror Budget”. It was just a jump to the left for Malcolm Turnbull, but still a step to the right with continued attacks on public service pay growth and decentralisation. The impacts of the Budget for Canberra are in the detail – not the headlines.

Yvon Nemchinov - 28 minutes ago
Well considering you have probably never lived under totalitarian rule, I expect you to lack understanding, Matthew. All of t... View
Carly Maree - 1 hour ago
I wonder if the people doing this use computers or phones? SMH. 🤦🏼‍♀️ View
Matthew Davies - 2 hours ago
Yvon Nemchinov sounds like you should talk to someone who has to watch people die of COVID who could have been saved. Freedom... View
News 77

@The_RiotACT @The_RiotACT
From building #WodenPlaza to making movie sets in #Hollywood and back again - this is carpenter Maury Cooper's epic journey https://t.co/Y2xFL2YN7A (28 minutes ago)