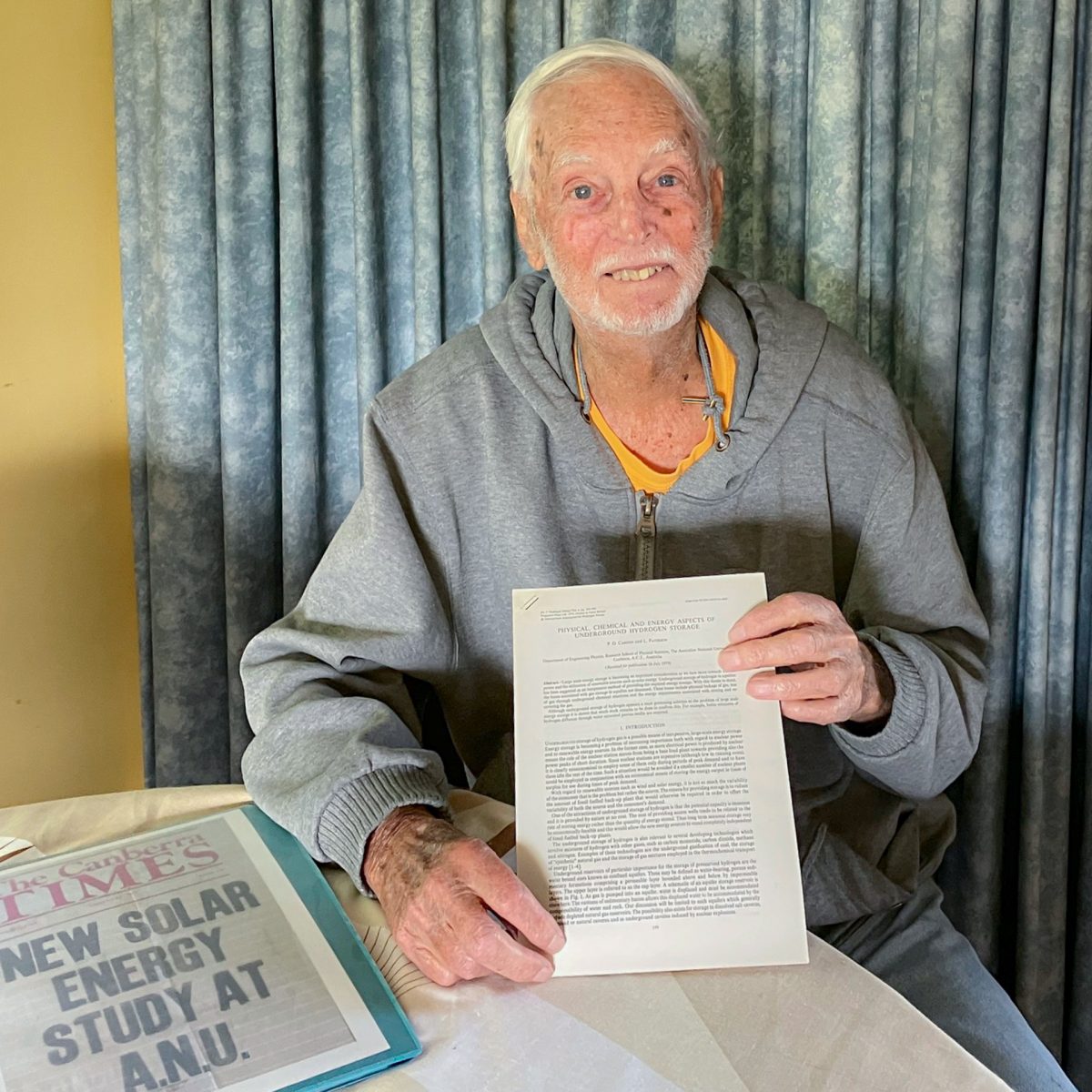 It’s true that academics get their work cited regularly – particularly if the research is good.

But 92-year-old Peter Carden, a retired Senior Fellow at Australian National University, couldn’t believe what he was reading when he was informed that a research paper he wrote in 1979 is suddenly breaking records when it comes to being referenced in contemporary works.

Dr Carden wrote a groundbreaking paper in 1979 entitled Physical, chemical and energy aspects of hydrogen storage, in which he suggests that large-scale underground storage of hydrogen gas was not just achievable, but also a desirable and relatively inexpensive option.

ResearchGate, an international tracker of scholarly papers, has just reached out to the engineering physicist to alert him to a spike in interest in his paper from around the world.

While his 27 publications have been cited 355 times overall, his 1979 hydrogen research has just copped 137 citations of its own, and mostly this year.

That’s a huge interest in an academic paper that is so old.

“I came to write this paper because of my interest in solar energy, really, and how to store it. How to grab it first of all,” Dr Carden told Region.

“The thing is, when you write a paper you have got to give credit to where it came from. An academic paper is always a story that starts somewhere else.

“Australian science leads in underground storage of hydrogen, and given the present interest in Australia’s role in developing a global green hydrogen economy, it’s not surprising that reviews of storage options cite this paper written in 1979.

“But I was surprised, actually. I’m getting a bit older now and I’m still interested in all this stuff. It was a good thing ResearchGate saying congratulations on your stats, but it just came out of the blue.”

During his tenure at ANU, Dr Carden was a true pioneer of and advocate for renewable energy. He spearheaded research that led to the White Cliffs solar thermal power station in north-west NSW and he also became known as the ”magnet man” for building a massive 300kg magnet to be powered by a homopolar generator.

He says he is an engineer more than a scientist and revels in how a good team can work together to achieve great things.

“It’s unusual. The progress of science is usually marked by the progress in things that are built,” he said.

“You always have the technology first and then comes the science, as far as I could work out. The engineers come first and they never get the accolades as much as the physicists, but you wouldn’t have one without the other.”’

But Dr Carden is certainly getting his share of recognition at the moment, with academics from all over the world praising his foresight.

His 1979 paper was groundbreaking in the day and it still provides options for governments to consider.

“It appears there are no insurmountable physical or chemical problems associated with underground hydrogen storage in sedimentary formations; rather, the problems are of economical optimisation in which the costs of hydrogen will play an important role,” he wrote in the paper’s conclusion more than four decades ago.

“With regard to capital expenditure, major items are the costs of the well and above ground equipment. However, the relative importance of these will ultimately depend on scale and advances in technology. This is not so for the single remaining major item: the cost of the cushion gas which appears to be irreducible. However, some of the initial investment for this may be recovered upon abandonment of the reservoir.”

Today, the mild-mannered academic keeps an active life, travels a lot and loves books and movies.

And he keeps bees for honey.

“I’ve still got the bees, and I’m still interested in solar energy,” he smiled.

Thank you for bringing this to us.