Goulburn a flashpoint in animal rights national day of action 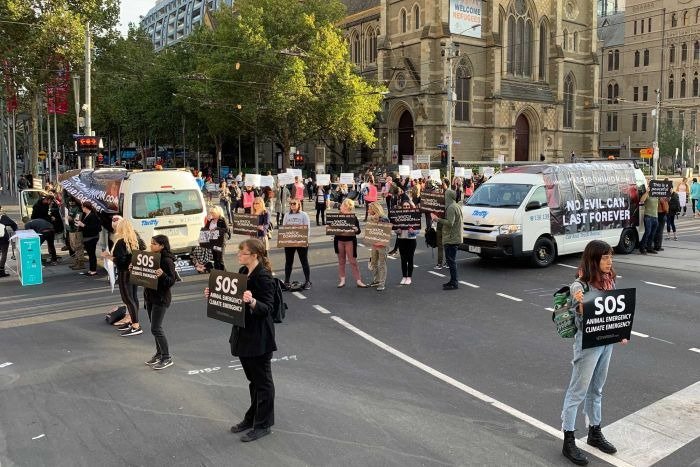 Goulburn has been a flashpoint in a national day of action by animal activists.

Nine people have been arrested and charged following a protest at the Southern Meats abattoir on Mazamat Road.

Police allege that about 2:30 am this morning (April 8), the accused chained themselves to a conveyor within the processing plant.

Asked to but refusing to leave, protesters were faced by officers from the Hume Police District at about 4 am. Goulburn Police Rescue cut the protesters free and arrested them at the scene.

Three men, aged 22, 22 and 46, as well as six women, aged 21, 21, 26, 28, 28 and 61, were taken to Goulburn Police Station where they were all charged with entering inclosed lands, interfering with the conduct of business and hindering police.

All were bailed to appear before Goulburn Local Court on dates between May 21 and 29.

It’s believed all of the protest party came from Sydney except one person from Canberra.

The local legal action follows protests from Queensland to Victoria today, the most notable of which resulted in commuter delays and frustrations during peak hour in Melbourne this morning.

And now animal rights activists are at the Sea Life aquarium. Some are refusing to leave. Police on scene too. @abcmelbourne pic.twitter.com/eMt6j0hom9

Batemans Bay’s Coral Anderson, who was a candidate for the Animal Justice Party at the recent NSW Election doesn’t condone people breaking the law but supports people taking action on animal welfare, and reacted to the protesters being labeled agri-terrorists, “So who are the terrorists? The peaceful protestors or the guys who slice open the necks of the terrified animals and watch them bleed out in agony so we can enjoy that good old Aussie lamb roast, pig on a spit or steak?,” she said on Facebook.

Speaking to Region Media, Ms Anderson says the Animal Justice Party stands at arm’s length to today’s action and is working towards changing rules and regulations from within parliament by having candidates elected.

“Earlier this year saw the same people, who masquerade as an animal rights charity, publish a map of farm operations across Australia, including several in NSW,” he says.

“This irresponsible and disgraceful vigilante behaviour presents a very real and very serious risk to our State’s primary industries as well as individual farmers and their families.

“As Minister for Agriculture, I will not stand by and watch such a sustained and deliberate campaign against our State’s farmers.”

Mr Marshall says the Government is committed to reviewing trespass laws and the associated penalties and will appoint an Agriculture Commissioner, “to work with the Office of the Small Business Commissioner to support farmers whenever their right to farm is under threat.” 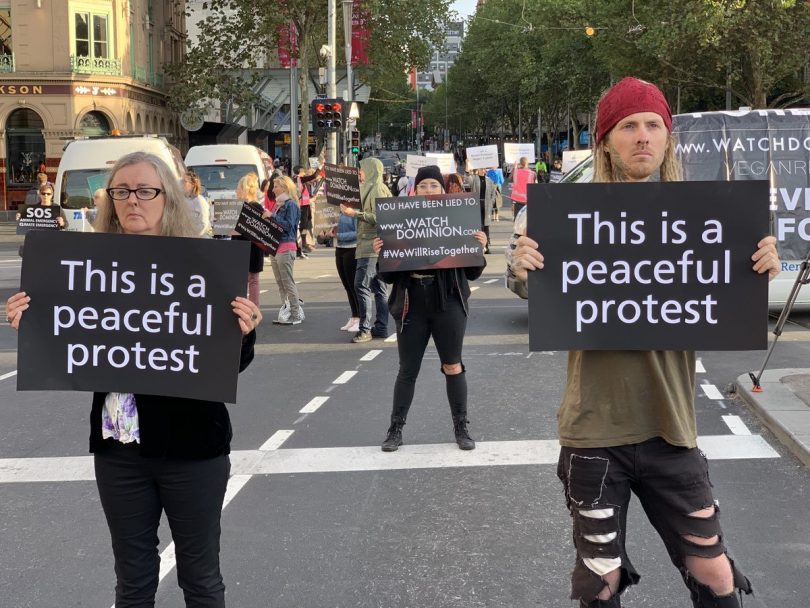 Much of today’s action seemed geared towards publicity for an animal rights documentary called ‘Dominion’.

Ms Anderson says, “Please watch the movie Dominion and then tell me who are the real radicalised, terrifying extremists who go around attacking others.”

“From where I sit, all I see from the protestors are peaceful demonstrators. On the flip side, I see ‘terrifying slaughter’ of innocent sentient beings.”

This is why people hate vegans.
Nobody else wants to know about your food cult.
Whole thing should have been dealt with by riot police using batons. Trespassing, break and enter etc is not peaceful protest. Neither is blocking major intersections and being a public nuisance.

Right. Now I know what I pay taxes for – so the great unwashed can exercise their right not to attend CentreLink as proof they are looking for work