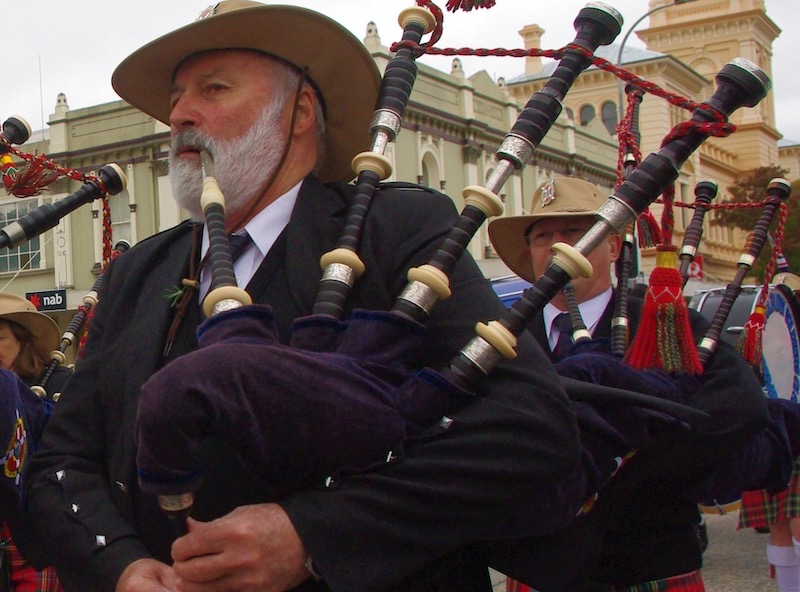 Leon Fleming playing the bagpipes at the 2014 Anzac Day parade. Photo: Will Fernance.

Songs of Ireland and Scotland grow more poignant over time and tides. They seep into the frost-covered hills and fog-hidden valleys between Goulburn, Taralga and Oberon. Their words and melodies help explain the consistency of a Goulburn band that, since 1957, has cheered, consoled and moved communities from the NSW South Coast to the mountains.

The band flourished and when the Presbyterian Church withdrew its sponsorship, some players hardly skipped a beat. In 1971, they continued under a different banner as the Goulburn Soldiers Pipes and Drums. Their founder was Leon Fleming.

He knew nothing of the bagpipes ‘disease’ when he first heard them on his father’s radiogram. Leon was a toddler, growing up at “Homelee” in the Jerrong district, 60km south of Oberon, and wanting to learn how to be a piper.

His father, Arthur, who worked on the former Mulwaree Shire with a horse-drawn grader, did not play an instrument. His mother, Flora, had a wonderful singing voice and her Scottish-born grandmother, Elizabeth Robertson, could sing in Gaelic.

Around Jerrong, people would take turns to clear furniture from their lounge rooms for a weekend of singing and dancing. Leon and numerous other children would go along with their parents and everyone would party into the evening, only stopping for a meal or supper. Pipers, fiddlers and accordions added to the revelry.

“From Golspie, Yalbraith, Richlands and Wombeyan Caves, everyone would get together and have a great time,” says Leon.

Once banned as a weapon of war and played secretly, the bagpipes have roared along Auburn Street, Goulburn.

Scotland the Brave rang out in the 1960s when state and national band championships at Seiffert Oval in Goulburn drew large numbers of pipes and drums bands. Shoulder-to-shoulder in a massed parade, the leading pipers turned from Auburn Street into Goldsmith Street, as the drummers at the end were pouring out of Clinton Street into the main street.

“We had our coming-out parade in 1971 with new uniforms and everything, and had a street parade, with bands coming from Albury, Wagga Wagga, Campbelltown and Wollongong,” says Leon. “One even travelled down from Condobolin. I felt on top of the world; it was like a family and has been ever since.”

Donald would have taken Leon to the Edinburgh Military Tattoo in 1976, but died. Leon lost another of his much-loved players when his wife, Hazel, who was accomplished on pipes and drums, died in 2009.

His son, Murray, daughters, Allison, Fiona and Christine, and grandchildren, Emma, Shauna and Rohan, play alongside another family: John and Amanda Chalmers and their children, Erica and Sally.

Leon has travelled for dawn services on the South Coast, taken a punt across the Nelligen River to play at Batemans Bay, and headed up to Adelong in the mountains. In 2013, the Goulburn clan won best street band at the World Pipe Band Championships in Scotland.

Unable to enter the Soldiers Club since March this year due to COVID-19, the band has practised twice weekly in Finlay Road’s wool stores and over Zoom video conferencing sessions.

The pipers blow through their practice chanters.

Allison and her father return to the bush near Wombeyan Caves to play the melodies with as much feeling and expression as an 80-year-old and his daughter can muster on their little block of land: “Piper’s Retreat”.

Daniel Pickering - 46 minutes ago
Legend. Taught me at Melba high back in the day. A great mentor! View
Ramon Montero - 3 hours ago
I do remember him when started arbitrate football, indeed very polite and educated a young person. I had the privilege to mee... View
Kacey Butterworth - 14 hours ago
I feel extremely privileged to have had Ben as a mentor, teacher and year co-ordinator throughout my high school years. He ta... View
Community 41