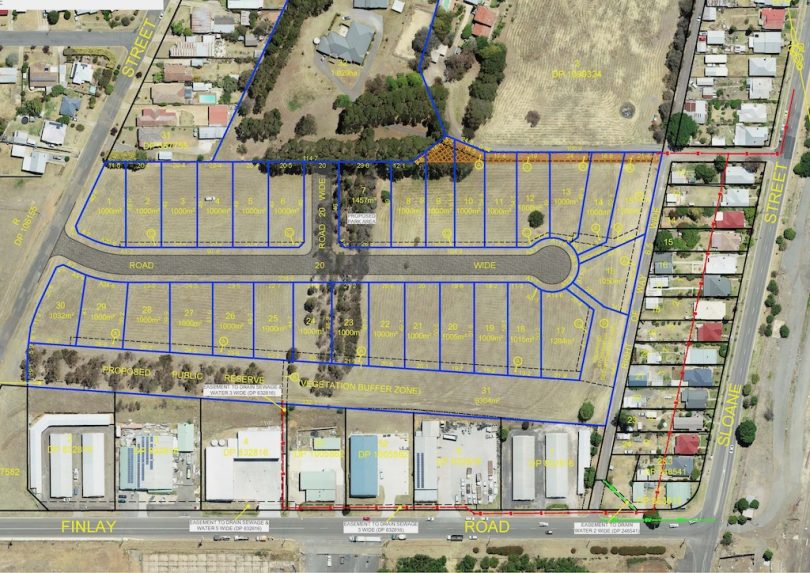 Goulburn is developing rapidly in almost every direction on the city’s edges. New subdivisions and proposed industries such as chicken processing and aged care are raising multiple planning issues regarding transport, water, amenity and heritage.

Planning guidelines that reflect the aspirations of Goulburnians are more crucial than ever. Regardless of how eloquently expressed pledges are to grow sustainably, what actually happens on the ground is the ultimate test. That test cannot be left to developers – as a sudden surge in unintended granny flats in new subdivisions has shown.

Meanwhile, Goulburn Mulwaree Council is about to change a vacant corner of inner-city land into a new residential subdivision to set an example of what it deems high-quality development.

Acting as the lead developer, the council proposes a wide-access road off Hovell Street on the south side to blocks of land 1000 square metres or larger (see illustration above).

A tree-filled buffer will separate the 29 new lots from industrial buildings along Finlay Road, and Japanese elms will flank the access road from Hovell Street on the 4.6 hectare site.

In June, Region Media reported a spike of high-density housing in new residential estates north of Goulburn, which threatened to compromise the council’s strategic planning.

The number of granny flats or second dwellings on the lots, while allowable within planning rules, could strain supporting infrastructure such as roads and stormwater drainage designed to cope with one home per block, not two. The council is not anticipating a similar outcome on its new subdivision on the corner of Finlay Road and Hovell Street once the land is rezoned as residential.

Goulburn Mulwaree Council general manager Warwick Bennett says the blocks will allow for varied housing within the R1 General Residential zoning. The council expects these to be attractive to people looking to build a home rather than flats.

“With this subdivision, council is looking to act as lead developer, and setting an example of what we believe to be a high-quality development in the city. The road reserve is 25 metres wide, which means plenty of access for vehicles including kerbside parking, along with landscaping including significant tree planting.”

Given NSW Government planning permission, the council will take the project through to the completion of the development application, then decide whether to continue as lead developer or sell as an approved development.

The council hopes the blocks, which are two kilometres southwest of the Goulburn CBD, will be offered for sale in the first half of 2021.

“We expect this subdivision to have a positive impact on this part of South Goulburn, and act as a buffer to the industrial buildings and ongoing commercial development of this part of our city,” said Mr Bennett.

A proposed public reserve and vegetation buffer is included on the land that borders the industrial developments along Finlay Road.

The proposal may provide the sort of diverse housing options the city lacks for an ageing population and smaller households.

Planning documents say native trees and shrubs stand in two windrows on the land, likely to have been historically planted. Grasslands cover most of the land, comprising native and exotic grasses, forbes and ground covers. About four hectares of land will be cleared.

The traditional steady growth for Goulburn is being replaced by development pressure which must be well managed to maintain the lifestyle that has made this city so attractive to Sydneysiders and Canberrans.

Word of advice to Goulburn. Don’t make the same mistakes that new Canberra suburbs are making.

A great example of Canberra’s issues being spread outside of its borders and impacting surrounding towns who really aren’t interested in all this noise. The housing crisis in Canberra is an absolute joke and an egregious front to people in general. The gentrification must stop. Why do we not have serious social housing? It’s lunacy to expect people to travel so far in order to survive, but of course they do. The common folk should be more vocal about this. The rich sit in comfort while the vast majority travel hours just to barely pay rent and their bills. While those in poverty have been forgotten long ago.

The location of Goulburn as the major centre between Canberra and Sydney is a drawcard, though lack of available parking spaces in the city centre and infrequent slow train services are a hindrance. It’s understandable why people and families are moving to Goulburn even if it’s a distance from work because of the higher house and property prices in Canberra and Sydney. Over all I find Goulburn to be a nice place.

Goulburn residents need to be careful ‘diverse housing options’ is often code for dwellings on micro-blocks with no room for shade trees or gardens with buyers being asked to pay more for less and put up with higher local summer temperatures and air conditioning costs as the lack of shade trees lead to a heat island effect. More often then not the micro-blocks are proposed for new developments because developers and local government make more money while existing and future residents are stuck with costs that include:
+ Increased congestion on local roads,
+ Reduced privacy as new higher density housing overlooks existing homes and yards,
+ Reduced access to sunlight as higher density buildings overshadow existing homes,
+ Increased street noise and light pollution,
+ Excess demand on local area services that can’t be met (shops, cafes, schools, GPs, etc.)
+ Decreasing property values for homes hit by reduced privacy and access to sunlight and open spaces,
+ Loss of vegetation that will decrease property values, increase local summer temperatures and cooling costs, reduce air quality, and protection from high winds.

What about Canberra why can’t it keep check of the pressure of developers? Instead they keep building wind tunnels. 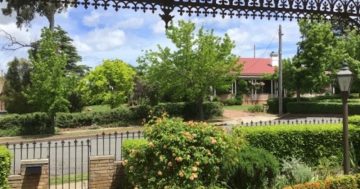