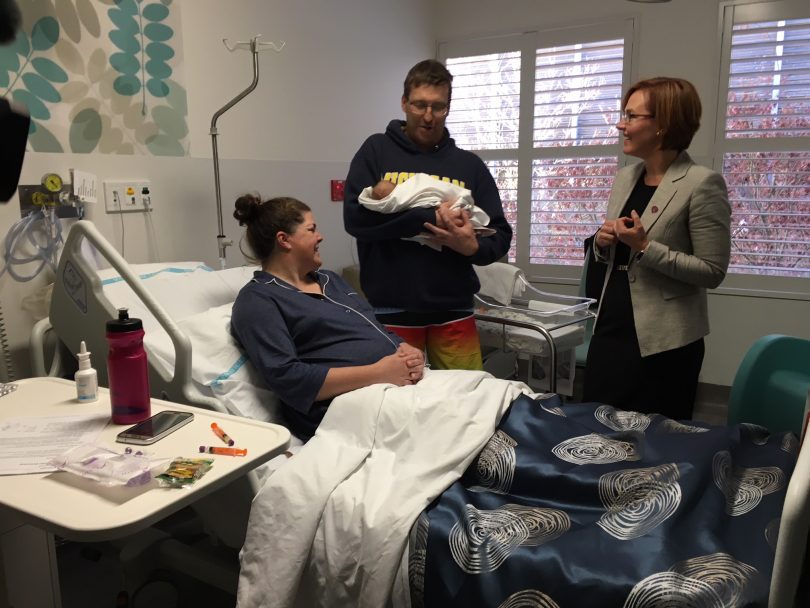 The Government is hoping Calvary Hospital’s newly refurbished maternity ward will relieve pressure on the Centenary Hospital for Women and Children by keeping more women on the Northside to have their babies.

The $2.6 million upgrade of the maternity ward has been unveiled and provides four more beds, more single rooms and day-beds for partners wanting to stay at the hospital.

ACT Health Minister Meegan Fitzharris said there has already been an increase in interest from mothers-to-be in staying at the refurbished ward, which she described as “a huge transformation.”

“What this means is that we now have two modern facilities for women to have babies in hospitals here in the ACT, both at the Centenary Hospital and here at Calvary Public Hospital in Bruce,” said Ms Fitzharris.

“That provides a much better level of facility right across the territory and gives more women the choice to have their babies here on the Northside.”

The Government has been under pressure in recent months over concerns about inadequate staffing and resourcing at the Centenary Hospital with the Opposition saying these are systemic problems.

Ms Fitzharris has previously put forward the Calvary Hospital maternity ward upgrade as a way of redressing a perceived imbalance with the Centenary Hospital having to cope with most of the maternity demand.

“We’ve certainly seen over the past couple of years since the opening of the Centenary Hospital a drop-off in the number of women here at Calvary and a significant increase at Canberra Hospital,” Ms Fitzharris said.

“There are some reasons for that which are outside the facility itself but we’ve certainly heard from a lot of women they wanted to see single rooms and a more modern facility. That’s exactly what’s been delivered here at Calvary Public Hospital.”

Although there are only four extra beds at Calvary as a result of the upgrade (making a total of 18 beds), Ms Fitzharris said there will also be extra beds coming online at Canberra Hospital.

“Overall there’s around about a 22 or 23 per cent increase in the number of maternity beds in the ACT in this financial year.”

Calvary Public Hospital’s Clinical Midwife Consultant of Postnatal Services, Jane Debaecker, said maternity ward staff are “absolutely thrilled” with the refurbished ward – particularly the 10 single rooms and the opportunity it provides for couples to stay together after the birth of their babies.

“We have an absolute expectation that more families will want to come here,” Ms Debaecker said.

“In our largest room, they feel as if they’re at the Hyatt.” 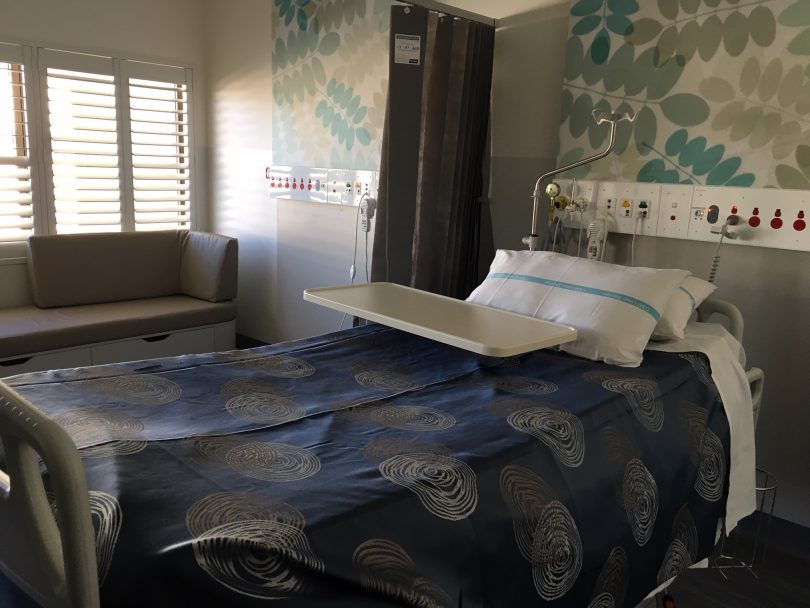 One of the new single occupancy rooms in the maternity ward at Calvary Hospital. Photo supplied.

As well as four extra beds, the $2.6 million upgrade of the Calvary maternity ward has delivered:

“I am extremely confident that women and families will be delighted by the new facility, and I’m also pleased to announce that Calvary will be updating its birthing suite as well,” Ms Fitzharris said.

“I’d encourage women planning to start a family to consider Calvary Public Hospital, which offers a high standard of care in a new modern ward.”

Tours of Calvary Public Hospital’s maternity ward are conducted every Sunday at 2:30 pm.

Lucas Graydon - 30 seconds ago
Hugh Gregory all the more reason for it not to be simplistic. View
Josh Rawson - 40 minutes ago
If by social credit system you mean the system utilised by some major Europeans nations so a billionaire doesnt get a $200 fi... View
Hugh Gregory - 50 minutes ago
Lucas Graydon it never has applied to the truly rich, but by reducing fines for lower income earners we would only spread the... View
News 13

Jesse Peter - 7 minutes ago
but seriously here's some actual historical evidence of how we used lockdowns, social distancing and masks to get the 1968-9... View
Jesse Peter - 11 minutes ago
yeah i remember my great grandmother telling me how she worked from home via the internet 🤪 View
Jody Maree Harrison - 15 minutes ago
Govty paying us again ? View
Food & Wine 3

Brianna - 34 minutes ago
Who is going to be delegated to give these tests and collect the data? View
Opinion 41

Monica Tiffen - 41 minutes ago
☘️Love to see him smile! View
Earthdog - 2 hours ago
The simple answer if you find his behaviour boorish and clownlike is to not watch him. I have restricted my watching sports/... View
Opinion 78

Simon Cobcroft - 46 minutes ago
You sir, are wrong. I have the misfortune of attending two Wiggles concerts AND a Cockroaches concert. Although, my son must... View
Roderick Saunders - 1 hour ago
Gulf Mike I'd rather not be reminded of Pretty Fly for a White Guy View
Nicholas Feeney - 1 hour ago
2006 - #5 I don’t feel like dancin / scissor sisters. The beginning of the end for the hottest 100 but was the end for me.... View
Lifestyle 5

Government’s fate may hang on finally getting health right