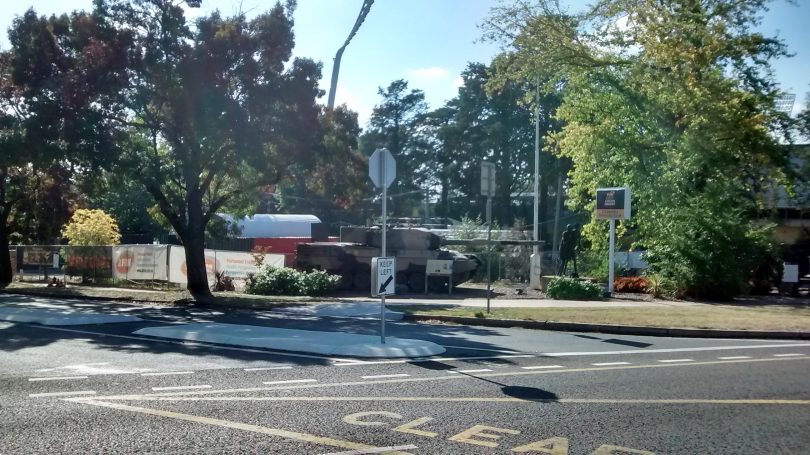 The Canberra Services Club site. The Club wants to vary the lease so it can sell the block or redevelop it. Photo: Ian Bushnell.

Fears that the community will be shut out of input into the future development of the Manuka Oval precinct have been exacerbated by the deferral of a promised community panel until after the new multi-million dollar Media Centre is built.

The panel was an election promise by the Chief Minister Andrew Barr after the collapse of the GWS-Grocon unsolicited bid to redevelop the Oval precinct in the face of community opposition.

However, Planning Minister Mick Gentleman has confirmed that establishment of the panel will now have to wait until the completion of the Media Centre.

Kingston Barton Residents Group spokesperson Rebecca Scoullay fears this is just another stalling tactic from the Government and sees no reason why it cannot be convened now, particularly when other development possibilities may arise in the meantime.

The Canberra Services Club has applied to deconcessionalise the lease on its prime Manuka Circle property so it can either redevelop or sell the site, which remains bare since fire destroyed the club building.

But the KBRG says the lease should not be varied until there is a holistic planning framework in place.

“While the community welcomes the news that the Canberra Services Club may stay at its ‘spiritual home’, we call on the Barr Government to withhold the approval of any lease variation until there are finalised Master, Conservation and Land Management plans,” Ms Scoullay said.

“These plans should be developed in consultation with the community panel promised by Andrew Barr in 2016.”

Ms Scoullay said a longstanding rumour was that the site would be redeveloped as a hotel, which had been proposed during the ill-fated land swap deal that met strong community opposition.

The club has mentioned a $45 million mixed-use redevelopment of the site.

Ms Scoullay said club president Mike Kinniburgh’s comment that should the club consider selling the block it would first look to secure a larger block at Manuka, raised concerns about publicly owned land and community facilities in the area, especially those that had been at the centre of the land-swap plan.

“As there is little free land in Manuka, we call on the Barr Government to reaffirm its protection of the Manuka Occasional Child Care Centre and Telopea Park School tennis courts and oval,” Ms Scoullay said.

Despite these potentially lucrative outcomes for the club, the lease variation application showed that the block had been valued at $250,000.

“This is approximately $100 per square metre making it some of the cheapest land in Canberra,” she said.

“The potential loss of yet another parcel of community land for the profit of a club and privatisation of the land is becoming unsustainable in Canberra,” she said.

The KBRG was not against development on the site but believe that it should be considered as part of a comprehensive planning model that is informed by the promised community panel.

Ms Scoullay said there were many factors that should be taken into account before the site was redeveloped, including local heritage issues, parking and traffic on game days, building heights, and impacts on Telopea Park School, residents and Manuka and Kingston centres.

She said both the KBRG and the Inner South Canberra Community Council believed there needed to be a holistic approach to development in the area rather than treating the closely located areas of the Kingston Foreshore, Kingston and Manuka Shops and the Manuka Oval Precinct as discrete entities.

Ms Scoullay said that with population growth and increased density and infill, green and community space needed to be protected so apartment residents had their ‘back yards’.

“The Barr Labor Government is putting the cart before the horse and implementing, and possibly approving, large infrastructure projects before it has a finalised master plan or conservation management plan in place. This contradicts best practice for development and community engagement,” she said.

“Small groups of whingers , getting more attention than they deserve.
Sometimes I wonder how anything gets built in this town.”

Not needed pet projects (like that ugly “media centre”) are getting built thanks to the call-in powers of another small group.

Everyone is so negative. It’s sickening 🤢🤮

The government is being sneaky. Residents in Griffith and surrounds never knew there was a meeting to "consult" with them about development - and the meeting was held at 7 which I suspect was to deter as many as possible

Kylie Jay - 55 seconds ago
Megan Chapman took me 40 minutes to get from Queanbeyan West to Tuggeranong on a week day which would normally take 15 on a w... View
consumeradvocatecanberra - 10 hours ago
Most folk don't get it. Canberrans love their cars and have done so for 30 years. It's quick and convenient. But, imagine car... View
Lucy Jane - 11 hours ago
4 day week for everyone but everyone gets a different day off. Will help immensely with traffic congestion and has been trial... View
Opinion 91