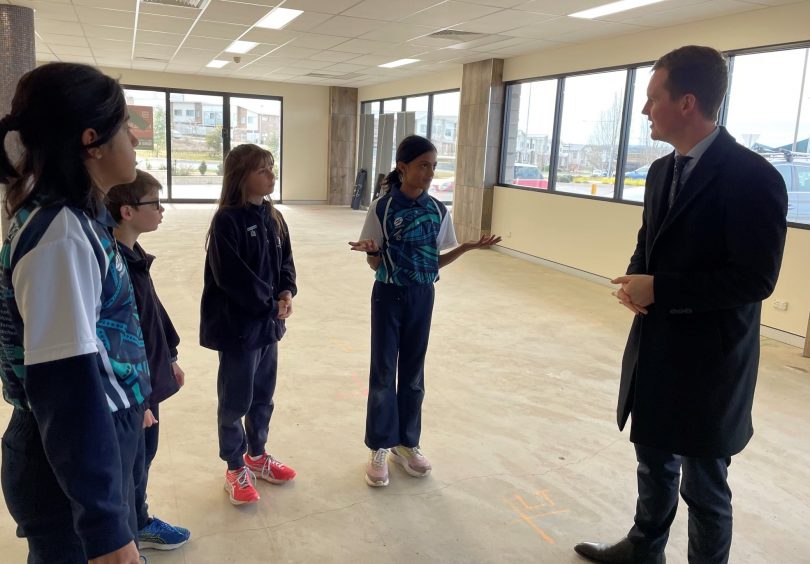 Special Minister of State Chris Steel talks to children from Charles Weston School in the Coombs community space which the Government will pay for over the next five years. Photo: Facebook.

The ACT Government has stepped in to provide a community space in Coombs until the proposed community centre is built.

It has agreed to cover the immediate costs and upkeep of the privately-owned Coombs Community Activity Centre on Woodberry Avenue, including rent, security, cleaning, and general fit-out for an initial five-year period.

The 300 square-metre space, beneath the childcare centre, has lain unused for years mainly due to the high cost of hiring from the private owners.

The deal means that Coombs residents, who have long complained about a lack of services in the new Molonglo Valley suburb, will soon have a place for community groups to use.

Special Minister of State Chris Steel said it would be one of the main community spaces in Molonglo while the proposed community centre on the corner of Fred Daly Avenue is established.

The new facility will also complement the new Denman Prospect Community Centre which is nearing completion.

“The investment in the Coombs Community Activity space will ensure that in the short term there is an affordable space for community groups to book and use,” Mr Steel said.

“The fit-out of the facility will include a meeting room that can hold up to 100 people providing a flexible and adaptable community meeting, program or activity space that is both functional and will cater to the needs of the growing community.”

The new community activity centre is expected to be available for use by early 2022 or sooner, when the fit-out is completed.

Molonglo Valley Community Forum (MVCF) member Monique Brouwer said the deal would provide a place for the community to meet and for social connection, which is vital to the wellbeing of residents.

“We are thrilled with this announcement. Valued members of the community alerted us to this vacant activity centre late last year. The Forum has engaged in discussions with the community and local members and is pleased to see the activation of this space,” said Ms Brouwer.

She said it would also provide a venue for the Forum which will have a regular booking for meetings and storage, something that was a barrier to establishing a community council in the Molonglo Valley.

The Government will undertake an expression of interest process for someone to manage the facility and community service organisations are encouraged to apply.

Last month the ACT Government announced that a new Coombs Community Centre would be built as a government-owned facility as part of the Coombs and Wright Village.

The Government says that in addition to the two schools which are available for community use, there are a total of five community facilities in the Molonglo Valley that have been built, are under construction or are being planned.

The Denman Village Community Centre is in the final stages of construction and the Government has also committed to building a new library and community centre at the future Molonglo Commercial Centre following a co-design process with the community.

The existing Stromlo Cottage community facility will also soon be available for use by a community-based organisation after recent maintenance work.