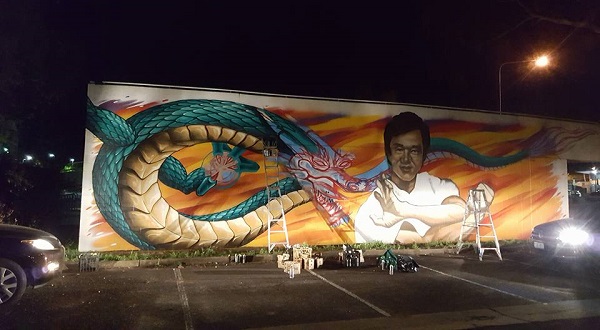 Anyone who has driven north past the ACT Road Transport Authority or WOTSO workspace in Dickson since last Thursday may have noticed a new amazing mural taking shape on the WOTSO wall facing the RTA carpark. 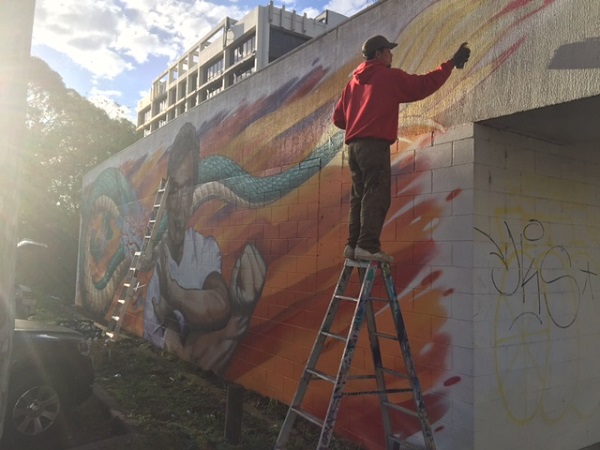 Their current artwork is one of the largest pieces of graffitti art in Canberra and will serve to highlight the growing local pride in this suburb’s significant multicultural nature.

Why graffiti? David explained that graffiti art was often misunderstood by the general community. That statement reminded me of that infamous episode when Steve Pratt MLA decided to embark on a one-man crusade against graffiti in Canberra and unwittingly damaged artwork on a legal graffiti site in a media stunt that backfired badly on him and his party. But David doesn’t let negative attitudes to graffiti stand in the way of his art, as the following video demonstrates.

I asked David why he chose Jackie Chan as the subject for this artwork. He said, “Jackie represents a multicultural richness in Canberra that many people are unaware of. There are a lot of Chinese Australians and people of other Asian cultures in Canberra and there isn’t enough public art to celebrate that aspect of our community. I wanted to reach out to it and celebrate it.

“I know people who take pride in the fact Jackie went to their local school and I also know about Jackie through my work in the Legislative Assembly – he’s a genuine local hero.

“I also want to replace the negativity a lot of people have about graffiti with a positive attitude about how it can reflect and celebrate something positive like multiculturalism.

“Graffiti can bring colour and vibrancy to a local environment and create appreciation and pride and actually make people feel safer if it celebrates local achievements and local people.” 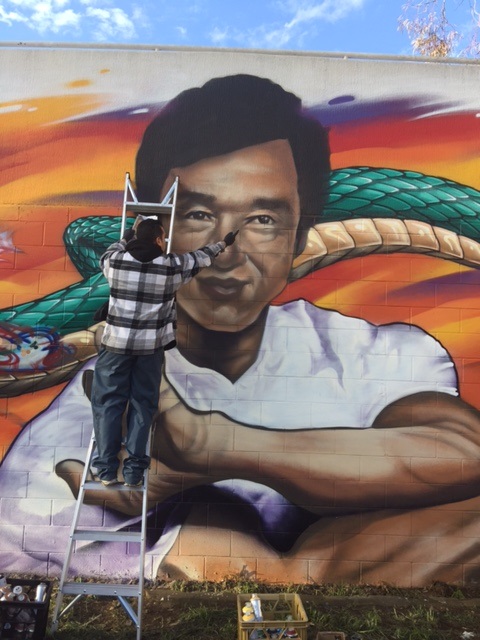 I noticed David and Ian were joking to each other in Spanish and asked them about their Hispanic backgrounds. What a great place Canberra is where an Arabic-speaking amateur reporter can spend an evening chatting to two Spanish-speaking men painting a portrait of a Chinese movie star facing a government carpark! 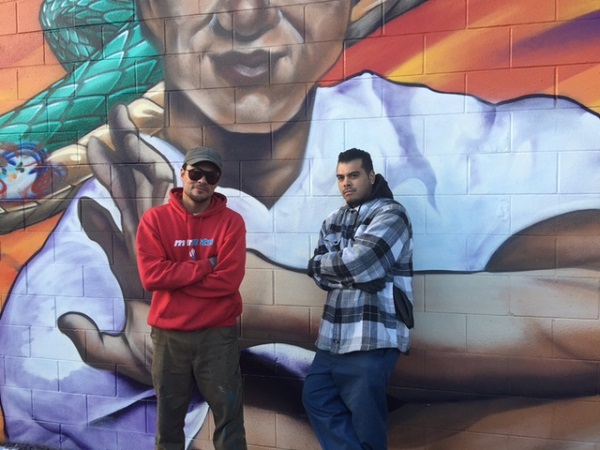 What was most surprising was that these two gentlemen were financing this project themselves and had paid for the materials, the ladders and the time out of their own pockets. They even searched and researched the wall themselves. Finding TAMS frustrating to work with, they ended up approaching building owners themselves and getting permission without the government’s help. One can of paint costs about $10 and they will use up to 100 over about a week to complete the project. This investment in their public art has cost them several hundred dollars in paint and materials as well as thousands of dollars worth of their own time. 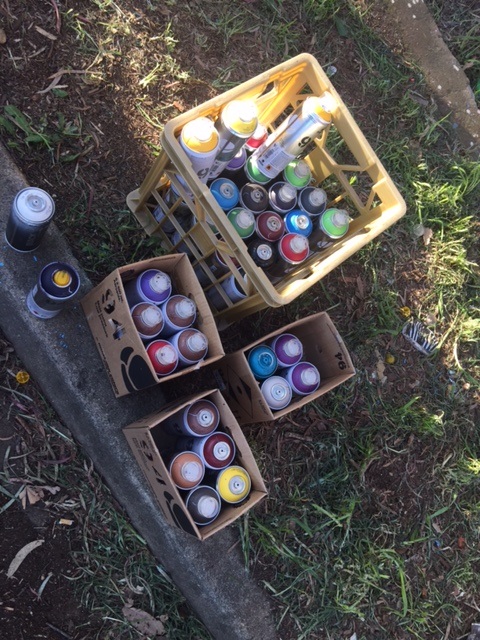 Ian also travelled from Sydney at his own expense to assist his friend in Canberra. They’re hoping that once completed, they will be able to find a generous donor that might help them buy enough fixer to cover the artwork and protect it from the weather so that it can be appreciated and enjoyed for years to come. If you know anyone you can contact both artists through their various social media accounts.

David Chavez can be found on Instagram, Facebook and YouTube. He can also be contacted on David.Chavez1988@hotmail.com or via social media and is available for privately commissioned work.

What: A huge Jackie Chan graffiti mural with a dragon and Jackie’s name in Chinese characters.
Where: The WOTSO building wall facing the ACT Road Transport Authority carpark in Dickson.
When: Hopefully finished later this week!

Elias Hallaj (aka CBRfoodie) is a part-time food blogger and full-time political staffer who has joined RiotACT as a regular contributor. He’s also an unfulfilled artist from way back. All opinions are his own. If you have any tips or feedback you can find him on Twitter @CBRfoodie.

Looks fabulous! And yes, Canberra is indeed a multicultural oasis.

Great work gents. I can’t believe that you have both self-funded this project. Hopefully the government can get behind you on future projects.

That looks amazing.
Are they the same guys who did the grafitti for the University of Canberra?
Near the cafe Mizzuna?

JC - 23 minutes ago
There not demolishing more than they build/buy. Biggest issue is they are not building/buying enough to keep up with demand.... View
consumeradvocatecanberra - 3 hours ago
Good on you Mark for stating the bleedingly obvious. What I would like to see is evidence based figures from Housing, prefera... View
Trish Casey - 4 hours ago
Elderly people and those with disabilities are put in ACT Government house and then for gotten or bullied by maintenance View
News 2

Artist turns up the volume at Belconnen Library

@The_RiotACT @The_RiotACT
A major landslide on a regional road between Moruya and Braidwood, in southeast NSW, has virtually landlocked residents, including health professionals who work in Canberra and farmers who rely on Sydney markets to sell their produce https://t.co/GlU9KD5e97 (13 minutes ago)

@The_RiotACT @The_RiotACT
Access Recycling is reassessing its future in Fyshwick and may move to Goulburn in the wake of legislation blocking its proposal https://t.co/e59RVT1RYZ (42 minutes ago)