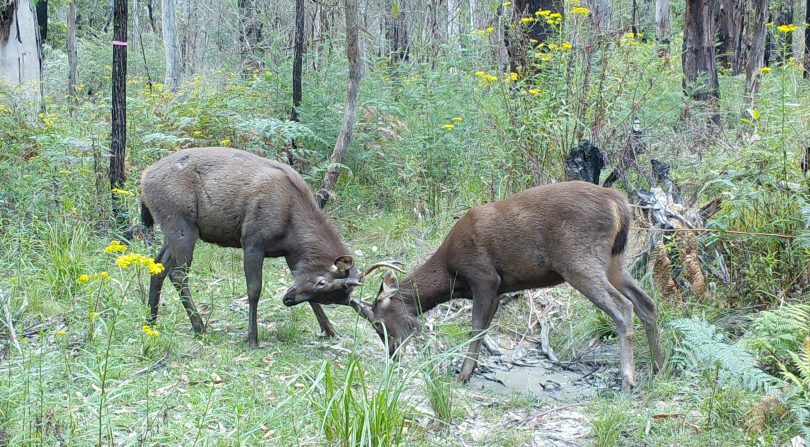 Sambar deer that can be found throughout NSW and areas of the ACT. Photos: Rod Hart.

Changes to the type of licence required to shoot deer have come under fire from the association that works with landowners to manage the animal’s increased numbers in the ACT and southern NSW region.

Deer currently occupy the ‘game species’ classification, meaning a special hunting licence – the NSW Game Hunting Licence – is required to shoot them. By removing the deer’s semi-protected ‘game’ status, anyone with a valid firearm licence will be able to shoot deer on private land, so long as they have landholder’s permission.

Essentially, the change removes the requirement to hold a NSW Game Hunting Licence before hunting wild deer on private land, allowing them to be managed in the same way that rabbits, foxes, pigs and goats are controlled.

However, deer will remain a game animal for the purpose of public land hunting by R-Licence holders. Before qualifying for an R-licence, you must become a member of an Approved Hunting Organisation, of which there are close to 200 in NSW.

The president of the Australian Deer Association’s ACT and Southern NSW branch, Dr David Carter, said that while the changes will make it easier for neighbouring landholders to work co-operatively on overabundant deer control, the changes will have little impact on growing deer numbers.

“The reality is that these changes will have little impact on deer numbers,” Dr Carter told Region Media.

Member for Monaro John Barilaro said the changes, which come into effect on September 6, would be a huge relief to farmers and landholders and will help to address the surging deer population in the region.

“Everyone in the Monaro electorate knows the deer population has exploded in recent years and has become a significant problem, particularly with the ongoing drought,” Mr Barilaro said.

“These feral animals cause significant damage to farming and also pose a significant risk for motorists.”

Dr Carter said changing the ‘game’ classification of deer shows little regard for what is a very specialised and demanding activity.

“Deer are special animals that people have high regard for. To put them in the same category as foxes and rats is disappointing,” Dr Carter said.

“We’d prefer to see them afforded the status of game animals because it creates value around them for small communities that benefit from hunters coming in and spending money. Ultimately, calling them names doesn’t manage them.”

He said it was also important to recognise that, in some parts, there are moderate numbers with minimal damage and you can get an important recreational and economic activity from deer being free-ranging and managed as game animals.

“Deer are effectively totally protected in the national parks which is a curious thing. That’s been the case for many decades which is why we have deer in large numbers in some parts of national parks because they haven’t been properly managed.”

Recreational hunter Rod Hart has been hunting deer for more than 20 years and said the change in licensing won’t address the problem the animals create on private and public land.

“They are eating farmers out of house and home and destroying public land with their antlers,” Mr Hart said. “You only have to walk across the river at Tuggeranong to see them. I’m also seeing lots of them dead on the sides of the road. Victoria is riddled with them.”

Recreational hunters in New South Wales took 30,000 deer last year. Over the border, in Victoria, that figure was 120,000. The main difference between the two states is access to public land.

Dr Carter said Victoria has allowed hunting in national parks for many years without any concerns.

“If the government and noisy activists are serious about limiting the overabundance of wild deer in New South Wales, they should act with urgency to provide more open access to public land in the State for hunting,” he said. 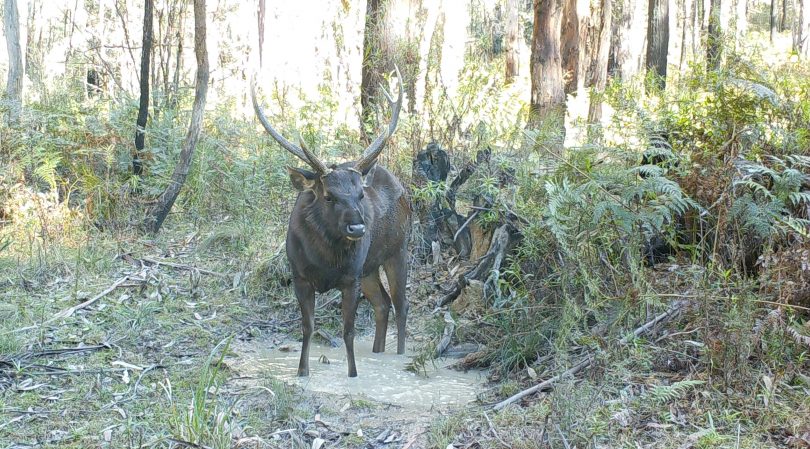 A Sambar deer is prized by many recreational hunters.

If they do so well in drought conditions why aren’t they being farmed for meat?

Veronika Sain expensive to farm. = expensive meat= low sales meant the farms failed and deer let go.
They need to be declared a pest species instead of game

There are export opportunities for deer meat. And it’s not hard to farm them. They are less damaging to the environment than other livestock. https://modernfarmer.com/2014/02/deer-farming-next-adventure-agriculture/

““Deer are special animals that people have high regard for…….”

So are domestic cats and dogs until they go feral and destroy native wildlife.

The male deer are literally ring-barking juvenile native trees with their antlers. They will turn the higher parts of the Southern Tablelands into a wasteland if they are not controlled.

Hunters are not disputing that over abundant deer need to be controlled, but that requires a serious and ongoing effort backed by data. Of all the options on the table, encouraging hunters to take more deer across the whole landscape is the only realistic, long term solution.
This latest move is nothing more than political grandstanding to appease a noisy agitator from Jindabyne.
In 12 months time the same problems will be around, if not worse, but by then we will have moved onto the next ill considered panacea.

Have been saying it for years. National parks are a safe haven for all of our pest species. Let people hunt in them. Probably 90% or more of the parks are never used by people in any case, so it’s not as if there is much danger of a bush walk being ruined by hunters.

So, just to be clear on this,

John Barilaro is advocating the shooting of a feral animal based on the destruction it is causing?

Yep, that’s what he’s saying, at least as far as deer are concerned. He has a different idea on horses though.