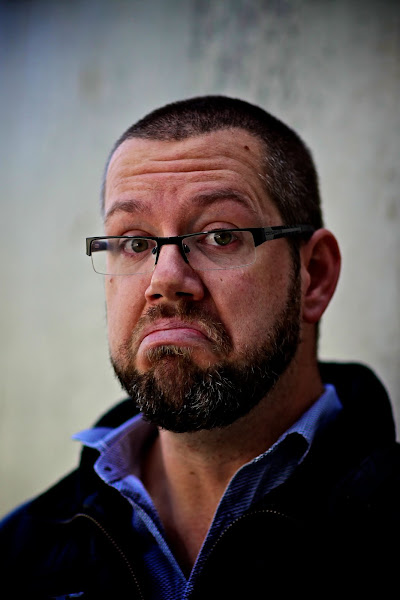 Man Baby is Greg Kimball’s show. That’s its name. He is not, to our knowledge, bringing a man sized baby to the pub.

That joke was mine, so it in no way represents the quality of Greg’s jokes.

“I’ve just become a father for the first time which is wonderful. But then I’ve had some monumental failures in life,” he says.

“So the show is kind of about how a person who probably requires full-time care himself is going to look after a defenceless child. The answer is just to say ‘yes’ to everything. So far I’m nailing it. He can’t talk yet.”

The show will also feature talented support acts including Jordan Windley, Christine Ryan, Emo Parsonson and be hosted by the hilarious Jez Margosis.

Greg Kimball will be supported by Jordan Windley, Christine Ryan, and Emo Parsonson. The night will be emceed by Jez Margosis

This guy was voted most likely to be a comedian in his year 12 yearbook. Contentious call, I am still dirty about that. Go Gus!!!!!!! The joys of fatherhood.

Was I really? And Charnwood had a yearbook? I think that was the back of a paper bag that had a pie in it. Still counts.

Pretty talented family all round really.

This guy was voted most likely to be a comedian in his year 12 yearbook. Contentious call, I am still dirty about that. Go Gus!!!!!!! The joys of fatherhood.

Melissa Wells - 3 hours ago
Ben was one of my teachers at Melba High in 2004/5. Such a genuine and caring teacher! Had no idea about this, but when is a... View
Sophie Stoddard - 7 hours ago
Taught me maths for a bit. 👌🏻👌🏻 View
Rory Wadwell - 7 hours ago
Stephen Wadwell you were very fortunate to have him as a mentor for your refereeing. View
News 67

Shirley Walsh - 4 hours ago
Congratulations Ricky View
Mario Vozella - 5 hours ago
Nice work mate 👍 View
Katrina Garrety - 5 hours ago
A very big congratulations to u Rick and ofcourse Kaylie too ..u no how the saying goes ..behind every great man is an even g... View
News 7

Lori J Tas - 6 hours ago
Bet the ALP wont do anything either 😒 View
Geoff Richardson - 6 hours ago
Maybe instead of wasting half a billion taxpayer dollars on an unwanted upgrade to the war memorial, those funds could be bet... View
Dave Wilkinson - 7 hours ago
Don't we have a brand new huge national archive in Mitchell...? I worked on its construction with Kms of compactus. View
Opinion 11

HiddenDragon - 6 hours ago
So the light rail terminus (and the pretty lights in the trees) haven't done the trick with all that "activation" and "enlive... View
JC - 7 hours ago
60m a year (cost of lightrail) doesn’t go that far. Some seem to think it’s a magic pudding. View
May Mac - 7 hours ago
If the Sydney and Melbourne Buildings could be constructed in separately owned sections which created the beautiful buildings... View
Community 44

chewy14 - 9 hours ago
JS9, I agree and it's this sort of rent seeking that does a disservice to what they are trying to achieve. It's actually also... View
show more show less
*Results are based on activity within last 7 days