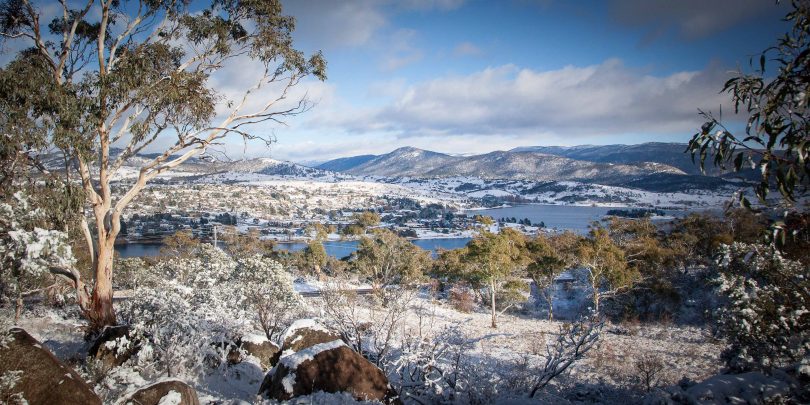 The shock and anger around the recent bashing and sexual assault of a man and women in Jindabyne has renewed local discussion about the town’s future.

Led by the newly formed Jindabyne Action Group (JAG), the conversation that has followed has been more about building community than installing CCTV.

“I’ve been here for two years, and when I first came here I was worried about my family being accepted because small towns have a reputation of keeping to themselves,” Olivier Kapetanakos, JAG convenor says.

“I can tell you Jindabyne is not one of those towns, my family and I are blessed to now call this place home.”

Happy childhood memories brought Mr Kapetanakos and his wife to Jindabyne. Both were keen to raise their family outside the corporate world they were working in.

With good internet and international flights now daily out of Canberra, Mr Kapetanakos has been able to maintain and build his fragrance business.

Its a story JAG want to see repeated as a way of building a bigger, permanent, year-round population in the town.

In the 2016 Census, the town had around 2,700 permanent residents, with a growth rate of 7% according to Mr Kapetanakos.

At a recent meeting, the Group expressed its wish to see the Jindabyne Action Plan fully implemented.

The plan dates back to 2010 and was developed by the then Snowy River Shire Council, with the aim of establishing meaningful strategies for the coming 20 years, addressing issues like climate change, aging population, provision of community services and facilities, town centre revitalisation, transport, education and sustainable growth.

“The Snowy River Avenue upgrade is an important outcome from the Jindabyne Action Plan. Upgrades so far include improved pedestrian links to nearby shops and cafes, increased trading opportunities, and enhancements to the road surface.”

Mr Kapetanakos says there are a number of legacy projects within the plan that are key in developing Jindabyne as a place to live and visit year round that are yet to be activated.

“When the lake was flooded in the 1960s the town itself was built for 600 people, the action plan has a growth corridor that enables growth in population and tourism,” he says.

“Unfortunately, the recent assault happened in a part of town without lighting, [and] the action plan deals with lighting.

“And there’s a great section on aged care – we are a town without aged care.”

Mr Kapetanakos also points to transport and youth services as areas needing attention if the town is to grow and attract families like his own.

“It feels like Council has lost a bit of momentum, the [Council] amalgamation has seen it swept under the carpet,” he says.

Council’s spokesperson says the Action Plan will be reviewed over the next 12-months.

“Further strategies and masterplans will be developed to meet the evolving needs of the Jindabyne community,” the spokesperson says.

“Council has already implemented No Stopping Areas along the Lake Jindabyne foreshore, and Alcohol-Free Zones throughout Jindabyne, to help deter anti-social behaviour.”

“Whenever I visit Jindabyne people talk to me about transforming the culture of Jindabyne from a winter party town to a place that attracts people for the long term,” Mr Wilson says.

“And there is frustration about trying to take some of those future town strategies forward.”

Mr Wilson says residents want more for their town and want to build on the legacy of the town as it grows.

With the Shadow Police Minister in town, police numbers were a topic for discussion.

“Crime is on the way down, there has been 50% less assaults, we are up slightly on malicious damage – but Jindabyne is a safe place.”

The JAG convenor says the community is grateful for the work of police and the increased presence over winter but he believes the town is wanting a deeper connection.

“We want Jindabyne to have a manned police station, we need somebody down there who can take resident enquires, otherwise we end up on the phone to Queanbeyan and when we do that, not much seems to happen,” he says.

Labor’s Bryce Wilson says local police do a great job with the resources they have.

“You have to commit more police to the whole state and it flows out from there,” he says.

Mr Wilson says the conversation goes beyond lower crime stats and is more about having all the elements in place that make for a stronger community and give people a sense of security.

“The community is very supportive of the Jindabyne Action Plan in achieving that, and seems to appreciate that Council has had its hands full with the amalgamation,” Mr Wilson says.

“This is a healthy, engaged community that is looking for positive solutions to build the town.”

The next meeting of the Jindabyne Action Group is August 7 from 7 pm at Jindabyne Bowling Club.

Rhonda Dahl - 2 hours ago
Nasty stuff xoxo View
Yvonne Johnstone - 5 hours ago
Driving on the GWH on the way to Mudgee... View
Property 8

Dan Rayner - 2 hours ago
Katie I had so much practice with you 😂😂😂 View
Katie Licciardo - 2 hours ago
Dan Rayner you love it don’t you View
Andrew Dale - 5 hours ago
Ash Claire dont you know anybody who has had problems with being able to afford to pay their rent. View
News 16

Vera Bachinger - 2 hours ago
So we are going to be the victims of more double dipping.. View
Slobodan Paunovic - 4 hours ago
Marc Edwards don't worry about it, can only be more expensive and some sort of public robbery...they need funds for parties a... View
Tom Adam - 6 hours ago
Jorge, yes I was basing my comments on the current claim. View
Opinion 18

Christie Le Goy - 2 hours ago
George Prasad hooray for you, no wonder you're such a gorgeous family xxxx View
George Prasad - 7 hours ago
I think it more comes down to values than hiding your wealth from your kids. We're a close knit family that doesn't focus on... View
Karen Feng - 8 hours ago
Kasra Mn That is a good point. When my sister was much younger she was surrounded by friends that is more economically disadv... View
Motoring 37

Stephen Fallon - 5 hours ago
I'm sure every one of these people consider themselves good drivers. If we put a fleet of unmarked police cars on the roads,... View
Chris Hart - 7 hours ago
Carol Ranft I’d say speed limits are a thing because most people are incapable of driving properly at slow speeds let alone... View
Food & Wine 23

John Hamilton - 7 hours ago
The wear and tear on roads is nothing compared to the wear and tear that cars and trucks produce. So no, don't start taxing c... View
News 11

Ben Norris - 10 hours ago
Can we we move the Northbourne flats junkies out of molonglo to whitlam now please? We've had our turn of non stop burglary.... View
Patrick Harrington - 16 hours ago
I'm sure the residents of Wright and Coombs will love a shopping centre in Whitlam. If Whitlam can actually get a shopping ce... View
Community 12

Daniel Duncan - 18 hours ago
Clinton good luck with that. View
show more show less
*Results are based on activity within last 7 days

@The_RiotACT @The_RiotACT
Seasoned Canberra performer Dorothy-Jane Gosper pulls no punches on her ninth album, which bears witness to the topic of child abuse https://t.co/BQVro3sJtH (33 minutes ago)

@The_RiotACT @The_RiotACT
At Oaks Estate, a new mobile health clinic is providing essential services to some of Canberra's most vulnerable people https://t.co/HpZpYrE1Sr (1 hour ago)