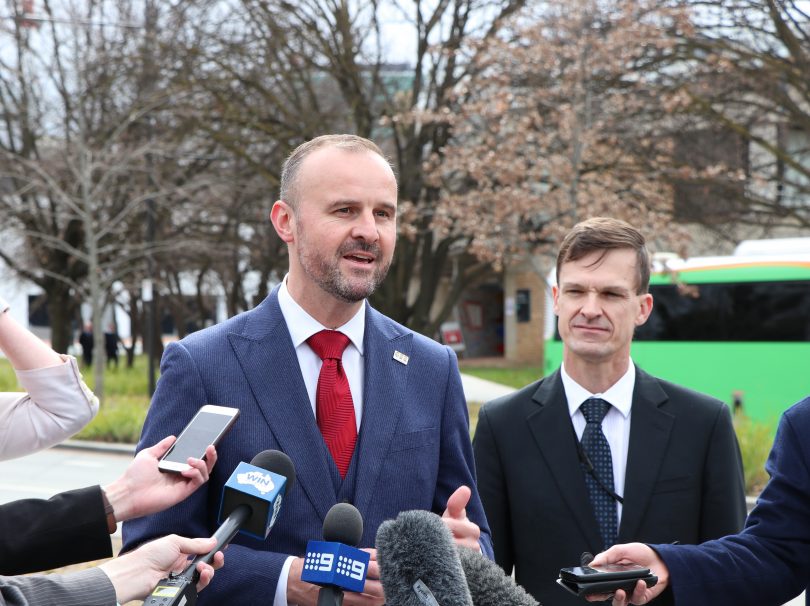 The RiotACT welcomes the ACT Chief Minister, Andrew Barr, also Treasurer, Minister for Economic Development and Minister for Tourism and Events, in continuing his monthly column with b2bmagazine.com.au and now the-riotact.com. This month the Chief Minister outlines a case for Canberra becoming ‘Australia’s knowledge capital’.

National and international institutions are investing in Canberra because they see opportunity for growth and the willingness of government and the private sector to work together.

Microsoft and the Canberra Data Centres will deliver high-scale cloud services out of a series of Canberra-owned and operated data centres in Fyshwick and Hume.

Meanwhile, the University of New South Wales Canberra announced the ACT Government will be working with it to build a major new campus on the eastern edge of our city.

This could bring life and investment to a new City East education precinct – adjoining Parkes Way and Constitution Avenue – and is another addition to Australia’s knowledge capital.

These two announcements are big statements of confidence in our city. They are city-building investments of the utmost importance and quality. They also play to our strengths in high education and innovation as we further diversify our economy.

These are investments that do not come by accident. They come from the ACT Government working closely with a number of national and international industry partners to deliver on this city’s potential.

Microsoft will deliver a world-class, secure and innovative open cloud platform that will ensure the digital transformation of Australian governments at federal, state and territory and local levels.

This investment shows Canberra is a hub for innovation in cloud technology and services in a sector that is becoming increasingly crucial for business, for individuals and governments around the world.

The announcement of a new campus for our city demonstrates that we are moving quickly to achieve these important policy outcomes and greater economic diversification Canberra.

The University of New South Wales Canberra has been here for 50 years. We will develop an MOU with the university and any expansion of their presence in our city will attract hundreds of millions of dollars of new investment to Canberra and create many jobs.

The higher education and research sector is already Canberra’s single largest export earner and has significant further potential in the ACT. It already contributes close to $3 billion annually and employs 16,000 Canberrans.

Both investments show that Canberra is continuing to become Australia’s knowledge capital.

What do you think? Will you benefit from this investment? Join the conversation.

Kara Youngentob - 1 hour ago
Alison Procter, it depends on how many people interested. Ideally, somewhere in the 750k range. View
Ben Hall - 2 hours ago
Lindy Hall we should buy this View
Mark Bradley - 2 hours ago
Alison Procter the million dollar question. Or part thereof. :). Given we are not quite one year into a mortgage, there's not... View
Opinion 20

PE TE - 2 hours ago
Sean Bishop but the Uber rapes have increased View
Kim Rumble-Kozjak - 12 hours ago
Jacqleequack it was all good fun until the two hour wait in the cab line, in stilettos, without a jacket in -2 🥶❄️ View
Food & Wine 23

Hugo Walker - 2 hours ago
Penny Ford But isn’t he rich, famous and self-entitled? Surely that should persuade the authorities to cave in to his tantr... View
Pia Kivela - 5 hours ago
Personally we are in a pandemic so we should not be having this tournament View
Milenko-Slavenka Jovanovic - 18 hours ago
Penny Ford Djoković is not just one of the other elite players, up to a few days ago, he was voted the players’ representa... View
News 29

Lisa LaMaitre - 2 hours ago
No-one pays attention to crime in Canberra until it impacts them! We closed a Gungahlin based business over 10 years ago afte... View
Property 26

Colleen Alchin - 11 hours ago
This situation is appalling! Forty minutes from the national capital and you need to buy bottled water to drink and wash clot... View
Tegan Gilchrist - 18 hours ago
Amy LD and the clothes!!! Swapped out all out white sheets for greys. Blazer ruined. I now fill up bottles of water from my p... View
Community 1

Lifeline Canberra - 11 hours ago
We love Sarge! Thank you for continuing to support the vital work we do in the Canberra community. Bring on Jan 30! View
News 6

dolphin - 21 hours ago
excellent news. will be good to have some community playing fields for Gungahlin.... View
News 22

Ben Keaney - 21 hours ago
Also if they are not in the numbers that the anti-brumbies say, what do you think a maximum brumby population should be? Sure... View
show more show less
*Results are based on activity within last 7 days

The victim of an attempted bag-snatch outside Belconnen Mall last Sunday (10 January) says her impression of Canberra as a...
Property 27

@The_RiotACT @The_RiotACT
A big, green mixed-use development planned for Gungahlin Town Centre may be powered completely by the sun and charge vehicles in the basement https://t.co/JqLOjLL10K (1 hour ago)

@The_RiotACT @The_RiotACT
Planning on hitting the beach? A hazardous surf warning has been issued for the South Coast, with waves up to three metres expected today & tomorrow https://t.co/F8pq5syJ8u (3 hours ago)