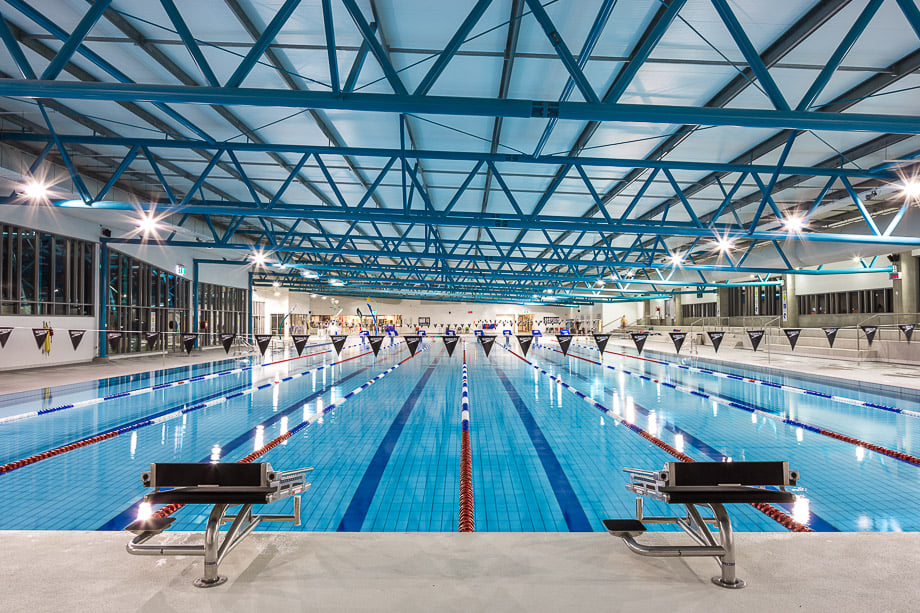 The Gungahlin Leisure Centre 50-metre pool is about to reopen after $4.63 million of repairs. Photo: Facebook.

The total repair bill for the trouble-plagued 50-metre pool at the Gungahlin Leisure Centre is $4.63 million, more than triple the $1.5 million contract to fix the problems.

But there is light at the end of the tunnel for swimmers in Canberra’s north with the 50-metre pool and the 25-metre pool, which has been undergoing maintenance, set to be open for spring.

The Centre says maintenance on the 25-metre pool is complete and will reopen on 25 July, while the 50-metre pool has been retiled and is expected to reopen by the end of August.

A government spokesperson said the government chose to completely refurbish the 50-metre pool instead of simply patching the areas that need to be fixed, as well as adding acoustic and lighting upgrades.

“These works aim to extend the life of the pool, reduce the risk of additional future works being required and provide the best opportunity to address any underlying issues identified and minimise disruption to patrons,” the spokesperson said.

The tiles on the 50-metre pool needed a few weeks to cure, and when complete, the gradual refilling process over about four weeks will begin.

“The pool needs to be refilled slowly in stages to ensure there are no leaks or water pressure issues,” the spokesperson said. 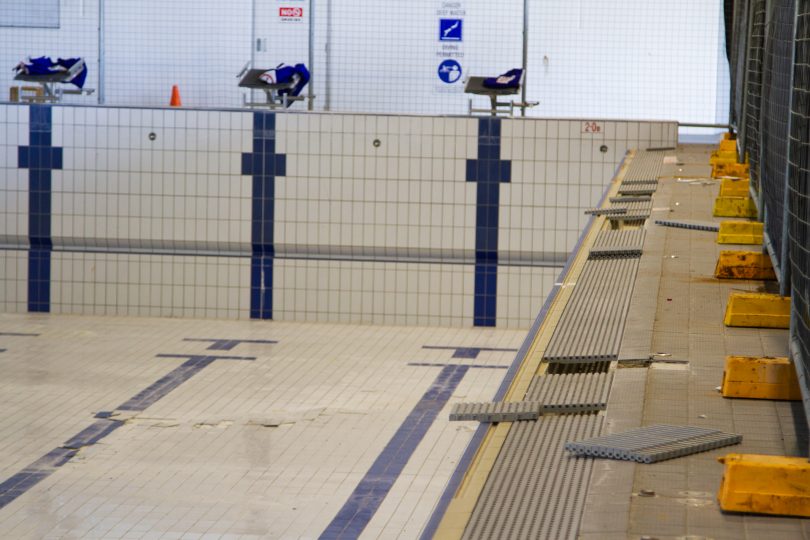 The damaged tiles at the Gungahlin pool. Photo: Region.

It has been more than two years since the 50-metre pool closed when leaks were discovered during regular maintenance.

Sports Minister Yvette Berry said she understood how frustrating the pool closure had been for the Gungahlin community.

“I thank everyone for their patience while this work has taken place,” she said.

“It is unfortunate that the repairs were taking place during the pandemic with multiple lockdowns which affected workers coming to Canberra and delays in getting materials.

“I am glad that we have now reached a point where we can soon reopen the pool for the Gungahlin community to enjoy.”

In January, the government said the reopening of the 50-metre pool, tentatively scheduled for the end of the summer, would be delayed again until mid-2022 due to the impacts of COVID-19 restrictions on resourcing for the project.

The delay plus the closing of the 25-metre pool, which young families use and where Learn to Swim and fitness classes are held, was a further blow to the Gungahlin community.

The $28.7 million Leisure Centre is only eight years old, but the main pool has hardly been used in recent years, attracting withering criticism from the Liberal Opposition.

In March 2021, the government accepted a $400,000 payment to cut ties with the original builder, ADCO Constructions, and signed a $1.5 million contract with local construction company Kynetic to repair the pool.

The government spokesperson said an event to mark the pool’s reopening was under discussion with the Centre operators, and the date and nature of the event will be confirmed in due course.

Obviously no shortage of cash 💰 in Canberra

630k on materials and labour. $4M on a systems thinker formerly out of CIT who told the tiles how to think.

After a significant period of no use, how long will it be before it closes again due to having to fix other equipment that has sat idle? Again the ratepayers will have to bear the cost for incompetence.

Not a moment too soon. Another of Yvette Berry’s success stories 😂

I heard the opening event will include a row of stocks to shame all those found responsible for this long debacle.

I still can’t believe that people were trying to absolve the government for blame over this project and issue for what was a clear failing of their management.

And once again, the taxpayers foot the bill for their mistakes and no one in government is held to account. As usual.

Canberra didn’t need a tram. We arnt the Gold Coast. That money could’ve been used on fixing facilities like this and creating more. Canberras growing and a friggin tram wasn’t needed the buses could’ve easily been converted to be more eco friendly or heck even installed with large electric batteries with the amount of money that was used leaving lots left over

Adam Jovanovic 🥱😂 What are you banging on about? If it’s the Light Rail you are referring to then I gather you live on the wrong side of town. It’s very popular over this way and gets a lot of use…..

Adam Jovanovic Just FYI, Canberra and the Gold Coast are similarly sized. Maybe not the best example for your biased argument.

Yes they are similarly sized but Gold coast has way more tourists and is a beach city with many attractions a light rail going from South port to Surfers Paradise makes sense, unlike Canberra. Also it’s an opinion not a bias Im not a bus driver and have no agenda to benefit from their being no trams I just think it was a waste of money and time that could’ve been better spent on something else

Linda Brett don’t confuse forced with popular, when the other option is removed it leaves no alternative.

Linda Brett I take it you didn’t watch while the bus network was deliberately cannibalised?

Nathan Fenech and having just spent a month on the GC using the public transport system – the buses get vastly more use. Light rail is also despised there for being slower and cannibalising the bus network where it operates.

Nice to hear from someone who’s also been to GC and knows how it is there.

Adam Jovanovic it was taken to Every ACT elections since 2012!
Time to move on, it’s here to stay!