Experts in buying, selling & renting
Your property, your future
23 January 2023 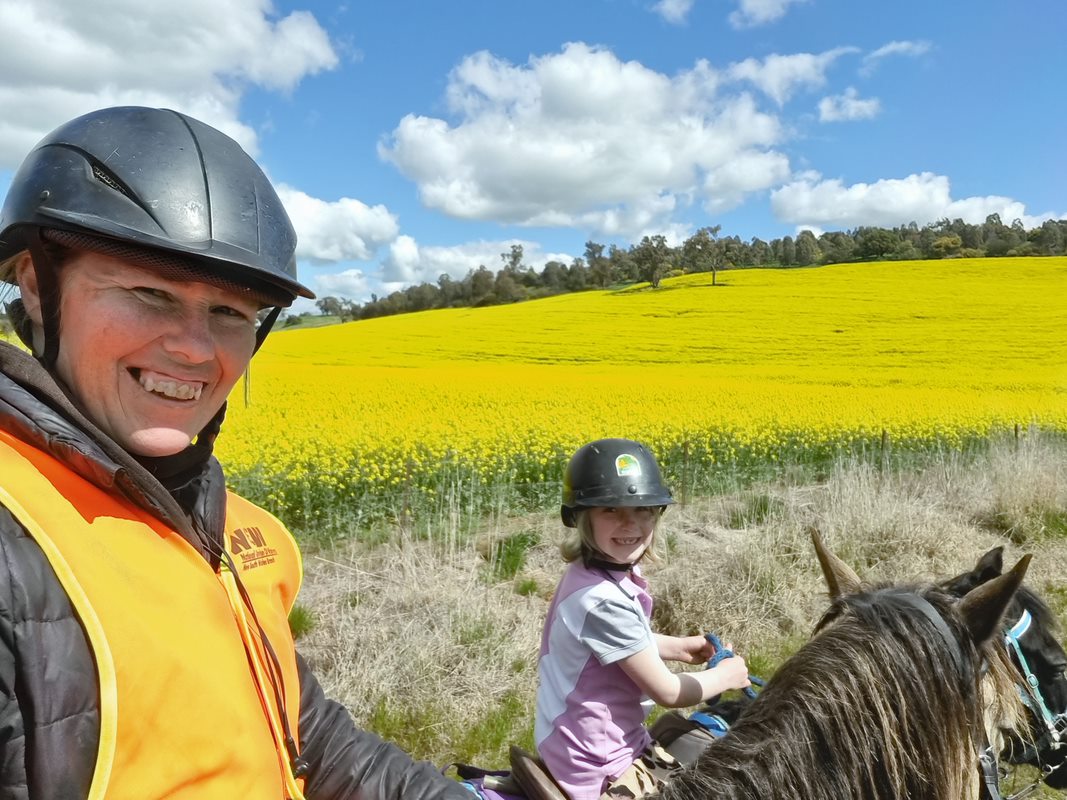 While most seven-year-olds were glued to their devices in the holidays, one Gunning youngster, Alanna Woodbridge, was riding her pony on a 600km+ trek across the country – to help others.

Alanna rode 26-year-old Pearl, from Cowra to Melbourne, supported on the mammoth trek by friends and family.

Although her first priority was to raise money for Little Wings, a not-for-profit, which provides help for sick children across regional NSW – wanting to embark on such a trek was not lost on her mother, Upper Lachlan Shire councillor, Lauren Woodbridge.

An experienced horsewoman, Lauren runs Black Pearl Horses, breaking in and training the animals. In fact, she entrusted her daughter to Pearl, the first mare she had under saddle, for the journey.

“She’s the safest horse on the planet,” Lauren said. “When Alanna started this journey, she was only six months after being off lead.”

Before she left, Alanna was scared about going up hills … “by the time she came back, she was cantering up them”.

Embarking on such treks is not new to the Woodridge family. Alanna’s grandparents joined her on the journey. Her grandmother Frances, 63, rode La Nina while grandfather Brian was always one trot ahead of the riders, scoping out the best spot to camp that night, first to put the billy on and caring for the four dogs that accompanied the riders.

The urge to ride for days on end, being with your best mate – be it human, horse or dog – and helping people. “I guess that’s where our trekking urge came from,” Lauren said.

At 14, Lauren rode from Canberra to Maryborough in Queeensland; the following year she trekked down to Healesville in Victoria. As a young girl, she travelled with her parents who worked on the circus circuit, again with horses.

While Alanna credits her mother with the passion for horses and trekking, Lauren does the same with hers. “My mum did a 4000km horse and wagon trip from the Queensland border down south,” Lauren said.

The idea for the most recent trek came when Lauren was presenting at Equitana, the largest horse event on the nation’s calendar. She was conducting sessions introducing young horses to humans and children to horses.

“My mum came up with the idea of doing the trek with Alanna and to support charity in the process,” Lauren said.

Alanna, it turns out, was thrilled with the idea. “Grandma made mum wait till she was 14 until she could do something like this,” she laughed.

Lauren moved to Gunning in 2011 from in and around Caberra. “I think we had moved about 25 times before settling in Gunning,” Lauren said.

“Our family had always travelled around … we had a gypsy sort of lifestyle, mostly doing pony rides in carnivals all over the place.”

Lauren said she had no qualms about letting Alanna take part in the trek. She joined the team every few days when her work allowed, offering moral and physical support to her daughter, parents and friends.

“But even at her age, Alanna is very much her own woman,” Lauren said. “I’d go to see them and thought, if she cracks, I’ll bring her home. But she never did.

“Her goal was to get down to Equitana – and visit the Healesville animal sanctuary – and raise money for Little Wings.

The riders were accompanied on the journey by family friend Karen Cave on Egg, and Ruby McCabe on Sonic, who was 26. 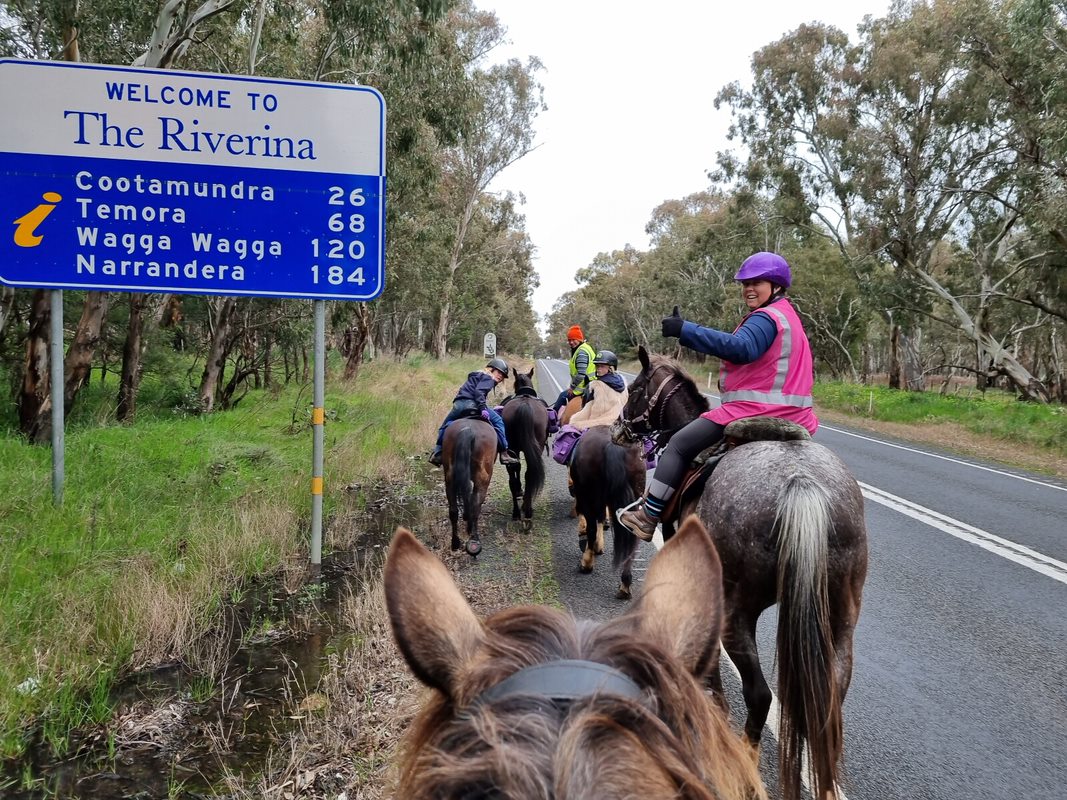 It was far from an easy trip, Lauren said. The heavy rain didn’t help, nor did the sore bottoms and … snakes.

“We came across a snake,” Alanna said. “Ruby nearly stepped on it because she thought it was a stick but luckily she didn’t get bitten.”

It was the increasingly wild weather that cut the more than a month-long trek short. Many of the camping spots and roads mapped out for the trek had become inaccessible. “It was quite ironic,” Lauren said. “We brought them back because of the floods and when got back to Gunning there were floods there too.”

The Woodridge family came home to a main street, including the pub, underwater – and general chaos. They quickly joined in the clean-up and still made their goal – to go to Equitana in Melbourne and visit the animal sanctuary.

Sonic the horse, who at age 26 galloped his way through the trek as if he were a youngster, died last week from a suspected tumour.

“Sonic was a tough little dude who didn’t slow down from the day we got him as a two-year-old until the day he died. He meant the world to many people,” Lauren said. 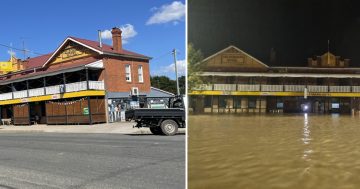 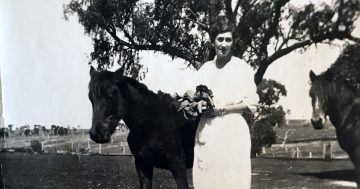 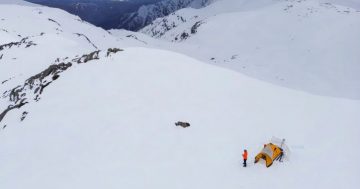 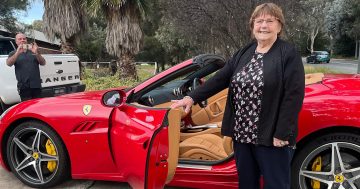