Guys and Dolls at the Q 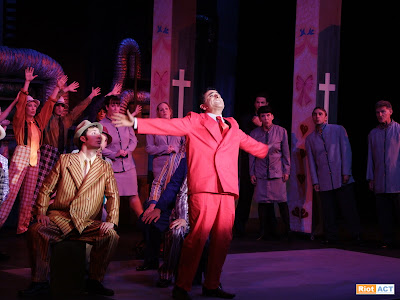 Last night I was lucky to go along to the dress rehearsal of Free Rain’s Guys and Dolls which is opening at The Q (Queanbeyan’s shiny new theatre complex) tonight.

Loesser’s musical is an archetypal Broadway show with singing, dancing, and the requirement for some serious acting chops too.

The band is big brassy, and booms out of the dedicated orchestra pit in a way one expects with so many members of the RMC Band moonlighting in this production.

There’s not much Free Rain can do about the show lagging in the first act, that’s just the way it’s written. But after the intermission the action heats up and the big songs arrive.

I was really struck by the total quality of this production. Costumes, choreography, and casting combined with clever set design and well executed lighting.

A gorgeous cast of characters who can all sing, dance and act made the most of the production for a really enjoyable evening.

If you’re unfamiliar with the Guys and Dolls it’s set in New York in the 1950s and is a tale of gambling, crime, love, deception, salvation, and of course, the theatre.

Without meaning to detract from a host of great performances standouts for mine were Adrian Flor as Sky, and Georgia Pike as Adelaide.

It’s running until Saturday 28 February. Performance times and booking details can be had from The Q’s website.

Starring the now-award-winning Georgia Pike 🙂 Georgia took home the CAT Award on Saturday night for Best Actress in a Musical, for her performance in Thoroughly Modern Millie last year.

This is a great production, with an all-round superb local cast. Catch it while you can.

I was blown away by the quality of this production. I took He who loves Musicals and expected to have to grit my teeth and endure, but it was a delight. The singing, dancing. acting and orchestra were outstanding. This is no hokey local amateur gig, get yourselves there while it’s still on this week!

Oddly enough elcapitan, one of the saxophonists in this production also did the show when she was in Year 9 at CHS…

It’s funny how things go full circle. When I was in Year 9 at Canberra High School, we did a production of Guys And Dolls – and guess who was playing the part of Nathan Detroit? A talented young guy named Adrian Flor. He was great then, I’m sure he’ll be fantastic now.

We actually did Guys and Dolls at school under the same director, Anne Somes. I am sure this is based on the success of ours.. 😉

I’ve got the horse right here his name is paul revere….

It was Ricky May playing Nicely in the production I saw!

Not so I noticed… which isn’t to say I didn’t miss it somewhere in there.

Did they include ‘Luke be a jedi tonight’?

Tony Falla’s “Nicely” also blasted that song out like a champ last night, if it was a highlight for you before then you’ll love this.

I love this musical.

I saw it down in Melbourne eons ago. I can’t remember who was playing Nicely Nicely Johnson in the production, but he had to perform 23 encores of “Sit down your rockin’ the boat” before the audience would let the rpreformance continue.

dreamed last night I got on the boat to heaven
And by some chance I had brought my dice along
And there I stood
And I hollered “Someone fade me”
But the passengers, they knew right from wrong.
For the peopel all said sit down, sit down, you’re rockin’ the boat

People all said sit down
Sit down you’re rockin’ the boat.

Sit down you’re rockin’ the boat.

I also went along last night while there were a few hic cups I really enjoyed the production. The set, chorography and costumes are excellent. I didn’t like the really long lead in to each act though.

I think Adrian Flor steals the show. He has so much talent that lad.

The Q is a top venue.

I’ll be returning next Friday with a group of 12 to watch again.

Catriona Moxham - 1 hour ago
Molonglo stage 3😢 View
Capital Retro - 6 hours ago
Living on borrowed time? It's actually more like living on borrowed money, from the Territory government to the unemployed. T... View
Lesa Schuster - 9 hours ago
The housing prices need to come down, it’s very hard for many people........it’s pretty city though and does not feel lik... View
Property 19

Kalo Arepo - 8 hours ago
Were they trying to jump the queue? View
Smackbang - 16 hours ago
How about you stop passing judgement on someone you know precisely nothing about? View
Opinion 82