Hadley bows out from the bootlegs 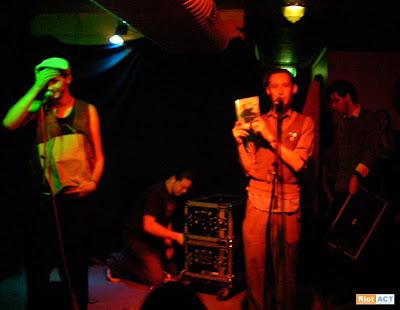 The Bootleg Sessions on Monday nights at the Phoenix have become a weird institution.

Where else will you get people lining up to get into a bar on a Monday evening to hear live original music?

For the last two and a half years Adam Hadley of poetry slam fame has MC’d the night for the princely sum of $75 and all the girlish cider he can down.

Now he says he’s giving the game away to pursue his dream of teaching orphans to ride unicycles while playing the banjo. That and to have more time to watch his Beverly Hills 90210 DVDs.

Last night was the final Bootlegs for 2008 and Hadley’s last one prevaricating in front of drunks while slovenly band members fumble around behind him lugging their gear in for their sets.

Bootlegs will be back in mid January 2009, but with a new MC.

Below is a slideshow celebrating the end of the era.

He’s going to be hard to replace.

Jeanne Mclauchlan - 20 minutes ago
Vanessa Schultz Hi Vanessa, it is very sad time for all, regards Jeanne View
Illyria Tyers - 5 hours ago
That's very young ... #RIP.... View
Vanessa Schultz - 12 hours ago
Too young, and always a happy football mad kid, I grew up across the road in Hopetoun Circuit Yarralumla from the McInnes RIP View
News 39

@The_RiotACT @The_RiotACT
The Greens & the Shooters, Fishers and Farmers Party have both announced candidates for Eden-Monaro as the race heats up. And with just over a month until the by-election, how will COVID-19 affect what could well be a tight race? Genevieve Jacobs has more https://t.co/HBSmZSAw63 (54 minutes ago)