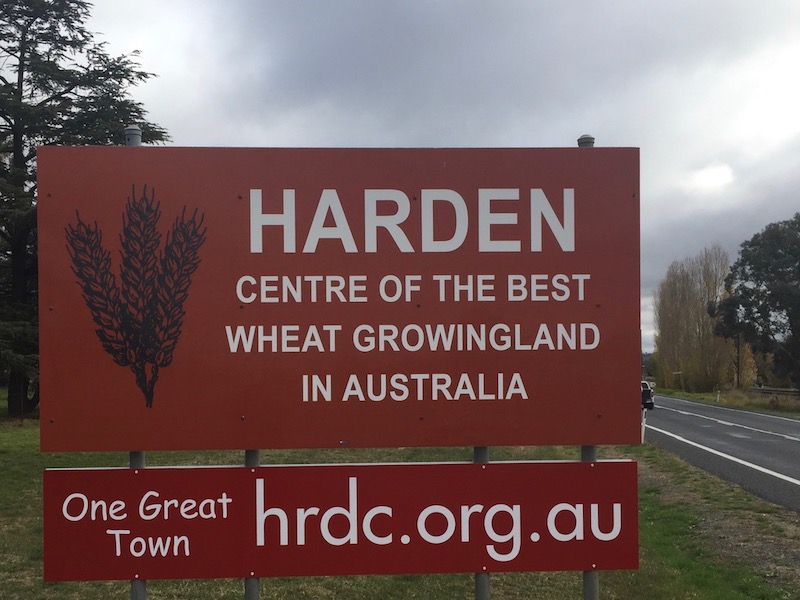 The new One Great Town sign (bottom left of sign) for Harden-Murrumburrah. Its aim is to underline the twin-towns’ willingness to grow as one entity. Photo: Supplied.

Growth projections for the Hilltops region are extremely negative and pessimistic, according to Harden Murrumburrah Regional Development Corporation.

North-west of Canberra, Hilltops Council formed in 2016 when Boorowa, Harden and Young councils merged into one entity. While many Canberrans see Boorowa and Harden as affordable places for owning a home, Hilltops’ latest economic and growth strategy predicts 0.4 per cent growth to 2036. The strategy, which will guide future planning documents, predicts a mere 0.1 per cent for Harden.

HRDC chief operating officer Tony Holland says a more realistic figure for Harden is 1 to 2 per cent. He says demand for affordable housing is growing from Canberra, but no land is available for residential or industrial development. The owners of 37 vacant blocks in Harden are not selling them, he said.

Mr Holland says when completed Hilltops’ new Local Environment Plan will open the way for residential subdivisions. “It won’t turn Harden into a new Gungahlin, but it will provide access to land,” Mr Holland says.

Underpinned by historic data, the Hilltops growth strategy predicts virtually zero growth to 2036, which the HRDC believes is a flawed way of planning for the future. The biggest problem is the State Government basing growth projections for regional NSW on historic data, which will spell the death of rural areas unless addressed, Mr Holland says.

HRDC’s response to Hilltops’ economic and land use strategy points out Canberra’s land prices have doubled in the past seven years, and is second only to Sydney land prices, which is forcing people to look further afield to buy a home.

The ACT’s spirally prices, and out-of-control prices in western Sydney are pushing up house prices in regional places like Marulan, Goulburn, Yass and Murrumbateman. All these places are themselves becoming expensive for some people in Canberra, and the next wave of affordable housing options are in Boorowa and Harden, Mr Holland says.

“The only reason more growth hasn’t happened (in Harden-Murrumburrah) is the lack of strategy and lack of land. We are not saying it will be a boom, we are advocating slowly building momentum for development,” Mr Holland says.

Mr Holland says places like Narromine, Coonabarabran and West Wyalong don’t have opportunities such as the ones for Boorowa and Harden, which are less than one-and-a-half hours’ drive from Canberra.

He says development of a new rural fire service on the eastern edge of Harden was initially to be serviced by a septic system, but the Hilltops Council instead would extend water and sewer services, opening up the land near the racecourse for subdivision.

To underline growth aspirations the HRDC is uniting Harden and Murrumburrah – rivals to some degree for many years – under the banner “One great town.” Soon anyone visiting Harden will see everywhere the sign ‘One Great Town’, to remind them Harden is serious about growing.

HRDC says the Hilltops document makes numerous comments around the lack of need for industrial land, yet in Harden well located industrial land is desperately needed.

However, HRDC acknowledges positive aspects in the Hilltops economic strategy including: