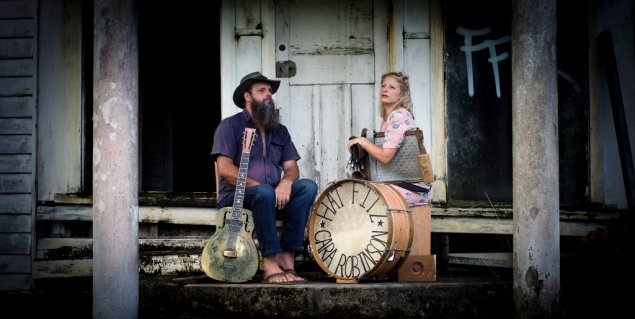 Stripped down to just voices, guitar and vintage drums, Hat Fitz & Cara embellish impeccable rootsy originals with powerful and soulful vocals reminiscent of a time once forgotten. They have been referred to as festival favourites globally, as they share a personal invitation into the parody of their lives on the road together that often has their audiences in tears of laughter.

Hat Fitz & Cara have been known to pack more energy, emotion and sheer musical exuberance into one song than most manage in a whole career. Their music comes straight from the heart with a sound that is full of inherent realism, making their live shows visually electric.

Hat Fitz & Cara have released their 4th album. Their last album, “Do Tell”, was no1 for 3 months in the Australian Blues & Roots charts and entered the Amazon charts at No 17 in Europe. Do Tell was voted best female vocal in 2015 Chain awards Australia.  They represented the South East Queensland Blues association in the semi finals of the 2015 International Memphis Blues challenge.

Robyn Holder - 1 hour ago
I don't think turbans will do the same job. View
Jane Forrester - 2 hours ago
Effing joking me. My kids had lids for bikes, cricket, football, horse riding. If these people fall off and have brain injuri... View
Kristy Morton - 3 hours ago
Omg no one law for everyone View
News 47

Alyson Armitage - 2 hours ago
That is so sad View
Karyn Richardson - 2 hours ago
Paula Williams is there a website or charity link fir James and his sanctuary? View
Jennifer Chalmers - 11 hours ago
Such a tragedy. View
News 12

@The_RiotACT @The_RiotACT
In a week when the ACT experienced extensive hail, damaging winds and out-of-control fires, here's the latest RiotACT newsletter to get you up to date https://t.co/GyuCxaAmxs (3 hours ago)

@The_RiotACT @The_RiotACT
Plans have been lodged for the second stage of Amalgamated Property Group's Civic Quarter commercial development on Northbourne Avenue at one of the city's key intersections https://t.co/SfxF3nIZN8 (5 hours ago)