Hats to Help. Fundraiser for the Brain Tumour Alliance 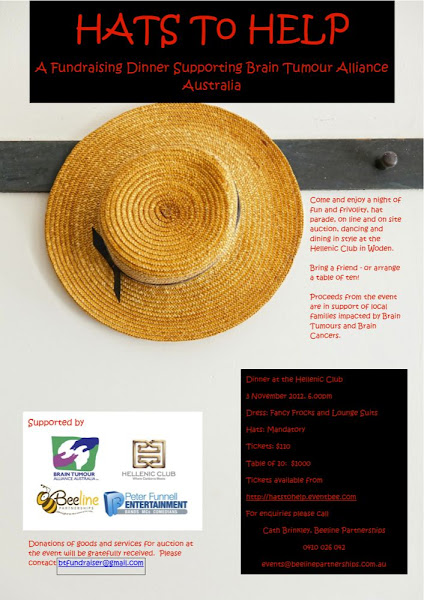 This just in and looks like a worthy cause:

“Come and enjoy a night of fun and frivolity, hat parade, on line and on site auction, dancing and dining in style at the Hellenic Club in Woden.

Bring a friend – or arrange a table of ten!

Proceeds from the event are in support of local families impacted by Brain Tumours and Brain Cancers.

Donations of goods and services for auction at the event will be gratefully received. Please contact bt.fundraiser@gmail.com”

3 Responses to Hats to Help. Fundraiser for the Brain Tumour Alliance
Filter
Showing only Website comments

My wife recently passed away as a result of a tumour (GBM – G4) which was misdiagnosed as well. There were many contributing factors to the misdiagnosis, and in hindsight they were obvious. I think with Brain tumours becoming more common, the practises of GP’s will change and early diagnosis should improve.

What we need to do it increase awareness to this debilitating disease so that appropriate research can be funded. Not to take away from the significance of other cancers, but Brain tumours, by nature of where they are, can have significant impacts on the individual either from the tumour itself or the treatments available.

The majority of GPs are useless in diagnosing these things. The first person to ‘know’ that I had a tumor in my head was an Optometrist and because she was not a ‘doctor’, all she could legally say is “it is not your eyes”.

Here are some alarming statistics for Brain Tumours

* Around 1,400 new cases of primary (malignant) brain tumours in Australia each year, including 100 in children.
• This number excludes an estimated 2,000 so-called benign brain tumours that may cause
disability or (rarely) death.
• Second highest cause of death for children aged 0 – 14 years from all causes – second only to
accidental drowning/immersion3 and highest cause of death in this age group from cancer –
an average of 33 deaths per year (2003-2007).
• Highest cause of death from cancer in people aged 0–39 (average of 120 deaths per year in
2003-2007).
* No significant change in five-year relative survival between 1982–1986 and 1998–2004 (19%).
* Largest lifetime financial costs faced by households of any cancer type, at $149,000 per person, and highest lifetime economic cost of any cancer type, at 1.89 million dollars per person.
* More than 5,000 hospitalisations, 12.5 days average length of stay in hospital (2008-09).
* Brain tumour research funding is low in relation to the burden of the disease – along with lung cancer
and mesothelioma, bladder cancer, pancreatic cancer, lymphoma and cancers of unknown primary site.9

Julia Ross - 12 minutes ago
Corey Karl hmmmm, money has changed hands methinks.... View
John Elliott - 17 hours ago
I live within 100 metres of the Establishment and I don't see a problem. So many people are whinging and complaining. The bui... View
News 15

Chris Cross - 20 minutes ago
I don’t care if she’s Liberal or Labor. That’s not the point. It’s not a ‘mistake’ to repeatedly speed. Its a tot... View
Chris Cross - 26 minutes ago
Lots of people here excusing her behaviour, and its pretty disappointing. Political beliefs aside, how many times must someon... View
Ric Stumpf - 28 minutes ago
Back on your broom! View
News 6

Mark Dando - 57 minutes ago
I don't get the level of coverage here of the views of these self-appointed 'guardians'. If the comments on this and the prev... View
Liam Matthew - 1 hour ago
There is not significant community disquiet about the proposed development. Calling yourself the Guardians of something doesn... View
HSewell - 4 hours ago
Genuine question: why should we pay attention to a self-appointed self-named group like the "Lake Burley Griffin Guardians"?... View
News 1

Acton - 4 hours ago
Will resisting arrest constitute assault against a police officer? What if you resist arrest while at a peaceful demonstratio... View
Gregg Heldon - 7 hours ago
It's the ultimate disrespect, isn't it? And should be treated as such. The real question is, will the court protect those who... View
News 1

Warwick Alsop - 5 hours ago
I don't disagree necessarily, although we do still have a guaranteed full week of work that isn't just cancelled on a whim by... View
Archie Mac - 8 hours ago
The amount of young people in Canberra who are given an unpaid ‘trial’ needs to be investigated too View
Opinion 2

With Canberra’s frosty winter mornings just around the corner, there’s nothing nicer than a hot shower to warm you up. So nice...
Business 7

A groundbreaking decision by the Full Bench of the Federal Court is likely to have significant implications for any employers...
News 18