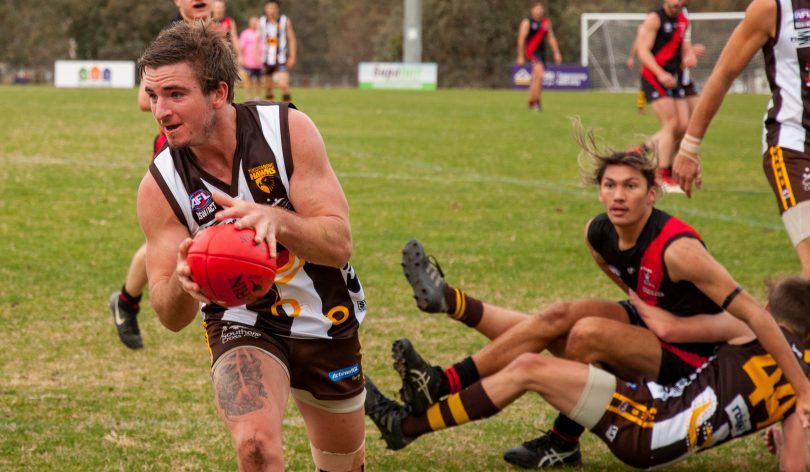 Ben Symons’ career can be defined as one of resilience, dedication and commitment. Photos: Wodshots Photography.

Ben Symons has gone through the agony of four knee surgeries, two torn ACLs and one surgeon’s mistake during his playing career, but the number that matters most to the Tuggeranong Hawks captain is 100.

The resilient midfielder will run out for his 100th game this weekend for his beloved Hawks 10 years after making his debut as a fresh-faced 16-year-old.

His promising career has been cruelled by injury but that won’t really matter to Symons when he runs through the banner at Greenway Oval on Saturday afternoon (6 July).

“The 100th game actually snuck up on me until director of football Ray Ghirardello told me on Monday (1 July).

“It has been a long time coming,” Symons said. “Back when I made my debut, I thought I would have a fair crack of playing 100 games because I was so young when I started.

“I obviously wasn’t prepared or expecting to have quite a few games off over the years but 10 years later, here I am. 100 games in 10 years is not a very good strike rate is it?” he said with a smile.

Symons set the competition alight when his extraordinary performance resulted in him being selected in the ACT Senior Rep side and winning the AFL Canberra Rising Star. But in the last game of his debut season, he tore his ACL, setting in motion a series of events that would affect his career six years later. 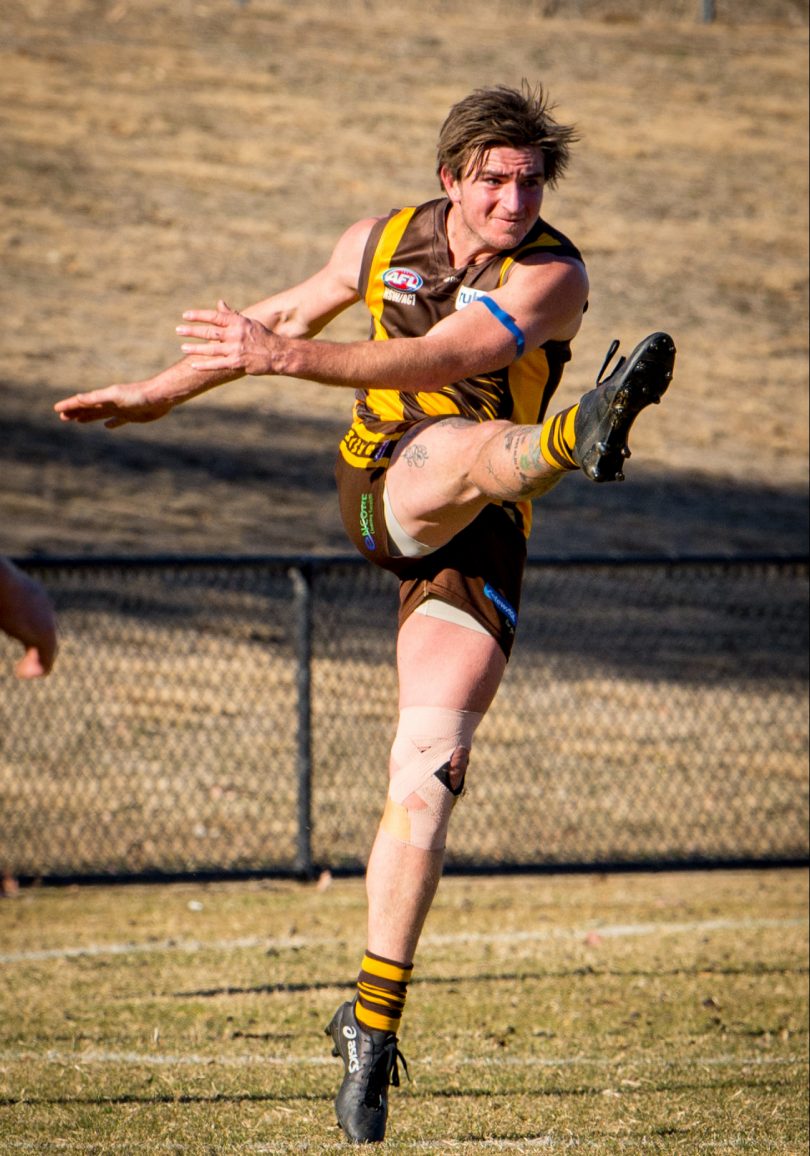 Symons led the side to their first win in two years last weekend.

“I went through all the rep teams and playing first-grade so young. It was exciting back then,” he shared. “But after my first full season, I did my knee in the last game of the season which was quite frustrating.

“Sometimes I think it was because I was overdoing it, being so young. It is a pretty big strain going from junior footy to playing a full year of first-grade footy. But you never know, it could happen to anyone.”

His ACL snapped again during a training session one night, causing him to miss the 2016 and 2017 seasons with his second knee reconstruction.

“My surgeon wasn’t happy with how the first surgery went so I got a bone transfusion and then six months later I had the reconstruction,” he said. “The surgeon during my first ACL surgery drilled a hole in my knee for the new ACL but he did it in the wrong spot so it set the second surgery back a bit.

“When I got scans before my second ACL surgery, my surgeon was not impressed at all so we had to redo it. But touch wood, it has been good for the last couple of seasons.”

But despite every setback the 26-year-old has been through, including a 23 game losing streak over the past couple of seasons, the skipper just wouldn’t give up.

“I just love the club and the people around it,” he said. “I have never ever thought about going anywhere else and I can’t see myself playing for any other club that’s for sure.

“I enjoy it that much that I have never thought I would quit. Maybe I’ll stop when I can’t walk anymore.”

ChrisinTurner - 14 minutes ago
Living in the inner north we now have to start planning to leave Canberra during SummerNats. Already the mufflers are being r... View
Opinion 12

jwinston - 20 minutes ago
harcm said “tim_c – what a load of rubbish you talk. What if your schooling was completely disrupted by domestic violence... View
Acton - 38 minutes ago
The money you are giving out of misplaced guilt to a street beggar is just funding their drug, smokes and/or booze addiction.... View
Mike of Canberra - 2 hours ago
So the problem with Jobseeker is that it’s insufficient for its recipients to live on. Well guess what folks - it’s not m... View
Community 140

Bill Gemmell - 25 minutes ago
Barbara Eglitis I was wondering how long it would take. Seriously, I had the Fowles St Park project in Weston in mind. Sugges... View
Barbara Eglitis - 31 minutes ago
Naturally occurring weeds, like the ones growing down the middle of Northbourne Avenue which looks disgusting??? View
Mark Slater - 46 minutes ago
Angie Drake The simple answer is, buy more mowers or employ more staff. It's not hard. View
Public Sector 172