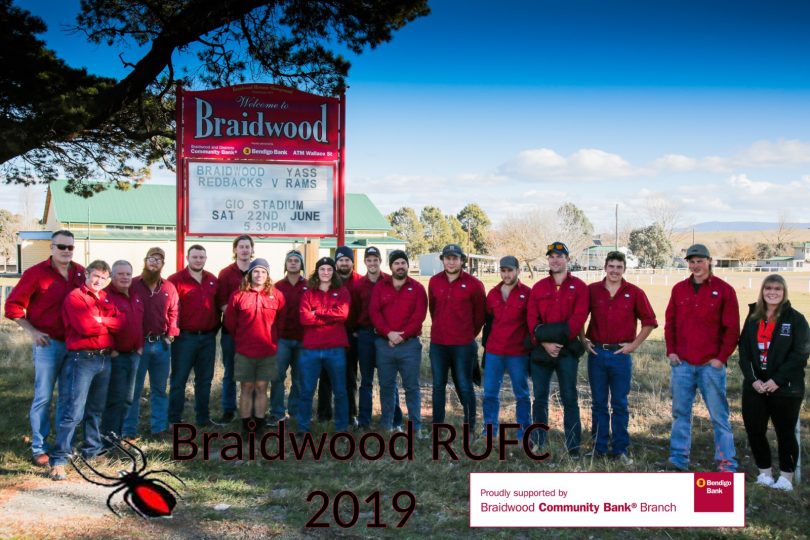 In 2016 the Braidwood Redbacks Rugby Union Club didn’t have enough players to field a team, while the Tuggeranong Hawks up until last weekend hadn’t won a game in the AFL Canberra competition in two years.

So what motivates clubs to continue when players are scarce and when winning is unlikely?

More often than not, it comes down to a committed group of people with the vision to see beyond a ‘winning or nothing’ culture.

The Redbacks, after failing to field a team in 2016, started a campaign to get players in the region to join the club. In 2017, they won just a single game. In 2018, they continued to struggle to get players and won two games, while so far this season, with a squad of 30 players, the Braidwood Redbacks have won three games. Things are definitely looking up.

Team manager, Nick Pengelly, says the aim has been to build a sustainable club. “It’s not all about winning. We have worked to turn this club into something that people want to play for, and where people want to be involved.”

The plan appears to be working for the Redbacks. They have 45 sponsors, which amounts to almost every business in the town with a population of 1,600 people; the smallest population base in the South Coast Monaro competition. The Braidwood Community Bank is one of those proud sponsors.

In the absence of a rugby league or an AFL team, the Redbacks and the Braidwood soccer teams, which play in the Canberra competitions, are pivotal within the tight-knit community. The social aspect can’t be underestimated, as Nick explains: “We have pushed for the Redbacks to be a family club where players feel comfortable bringing their kids down to the games.”

While we tend to focus on the Brumbies and the ACT teams in the Canberra competition, it’s worth noting the value of sport within the country towns in our region. The Redbacks play against teams from Crookwell, Jindabyne, Taralga, Bungendore, Broulee, Batemans Bay and Yass.

Not only are they keeping rugby union alive in the bush, but they also keep the community alive. 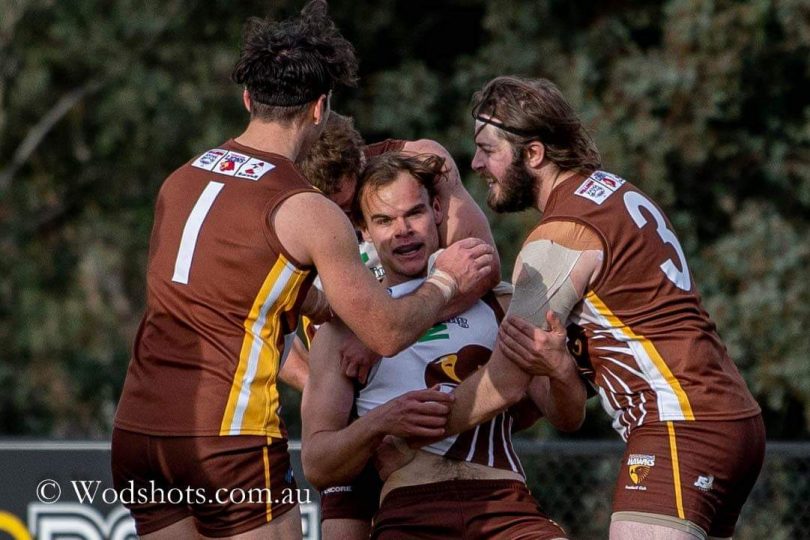 Coach of the Tuggeranong Hawks, Peter Ashcroft, knows first hand the importance of looking beyond the competition.

He has felt the frustrations of rebuilding a club with the end picture often clouded by the quest for victory. Up until last weekend, the Hawks hadn’t won a game in 23 matches. That’s two years without a victory.

But for Peter, a 350-plus game veteran of the Hawks, it is not simply about winning. “I wanted to make it a place that people wanted to be around. It’s about footy, but it’s also about the social structure.”

It hasn’t been easy losing every game last season including one by 208 points.

“Definitely last year was tough trying to get enough players on the field,” Peter recalls. “There were a lot of sleepless nights. We had to forfeit a game in reserves because of not having enough players.”

There have been times of despair but Peter says the support from those associated with the club has been invaluable.

That support included securing a physiotherapist this season after going through last season without one because of cost.

This year the player numbers have increased with players returning to the club from the bush. The impact was there for all to see last weekend with a 54-point win over the Gungahlin Jets.

It has given the club confidence in the direction they have been taking to make it more than just about football. Peter concedes, “Some of the younger players struggled with the words to the team song, having never sung it before.”

Both the Tuggeranong Hawks and the Braidwood Redbacks have displayed another reason why sport is so important within communities: It is not just about winning.

The Tuggeranong Hawks have been around for many years. Despite the challenges the club continues to prove the importance of community sport. And success is measured in many ways. The Hawks are wonderfully successful!

Terri O'Leary thanks Terri, it is. We love our club and our players, it's a special bond

Dan Cope - 46 minutes ago
👏 well done Emma. View
Alexandra Mary - 1 hour ago
Jaimie-Lee Peattie it is! So awesome to see more being set up View
Montana ONeill - 2 hours ago
This is good to see and hopefully it grows throughout the region to other areas💙 View
Opinion 51

J D - 2 hours ago
Fact one : Attendance to vote in an Australian Federal Election is Compulsory. Fact two : the Australian Electoral Commission... View
Capital Retro - 6 hours ago
That's pretty much what I said but in auditing after polling day the anomalies would be detected and the person could be dete... View
News 14

Capital Retro - 4 hours ago
It was reported this morning that on some international flights into Paris, 10% of the passengers had tested positive for the... View
Futureproof - 4 hours ago
International arrivals = lockdowns, rinse and repeat. There's a lesson there, but no one seems to have learnt a thing... View
Breaking 2

Acton - 4 hours ago
Bats carry desease, shriek incessantly, spread fleas, stink, excrete copiously, but have been allowed to take over part of Co... View
kenbehrens - 7 hours ago
The Government has been keen advocates of people, especially renters, being able to grow their own food. We have a vege patch... View
jwinston - 9 hours ago
Our hospitals are dysfunctional, roads aren’t maintained and education is nearly non-existent. But let’s waste time produ... View
News 10

@the_riotact @The_RiotACT
We've got all the hot news in this week's newsletter - from hot property, to hot-desking. Subscribe now! https://t.co/nl4QFZTDQW (22 minutes ago)

@the_riotact @The_RiotACT
The hearing for an Australian Federal Police officer accused of forcing a woman to touch his genitals has ended with his lawyer arguing there was "ample basis for reasonable doubt" https://t.co/TfE5K5Ae2H (37 minutes ago)