Health impact of the smoke plume 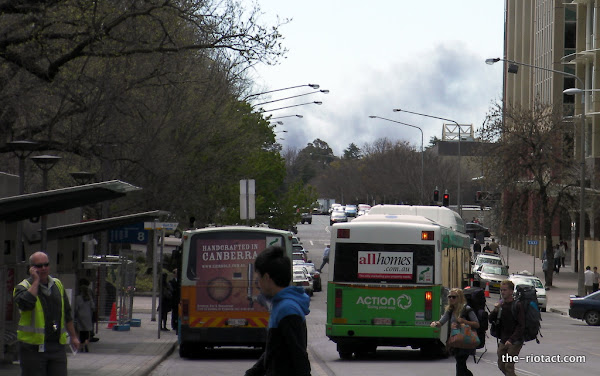 As we come to terms with the ongoing chemical fire in Mitchell the ESA has given a warning of the possible effects of exposure to the stuff which was clearly visible from Civic this lunchtime (emphasis mine):

Canberra Connect has received 2250 calls from the public about the Mitchell fire.

There has been no-one present to hospital with any of the symptoms that would occur from coming into contact with the smoke plume. We do not expect this to change at this stage.

It is known to cause irritation to skin and eyes, sore throat, nausea, headaches and dizziness, vomiting, chest pain and difficulty breathing.

People who have concerns they may have come into contact with the product of the smoke plume and have any of the symptoms should seek medical attention at an emergency department or ring emergency triple zero 000 for life threatening cases.

Road closures as previously advised are still in place.

Sodium tarnishes rapidly in air but does not combust on contact with air.

Looks neat when rolled into a frozen lake though.

Sodium tarnishes rapidly in air but does not combust on contact with air.

Sodium does, however, have a melting point under 100 degrees Celcius. It’s likely on fire, letting off hydrogen gas and sodium hydroxide in the process.

No wonder people’s throats are feeling rough if they’ve inhaled any of the smoke… if you’ve ever unintentionally inhaled some oven cleaner you’d know how they might be feeling.

These 4 birds (not sure what kind but large ones) arrived at 9:15pm – did 6 loops around the smoke column. Then headed of to the mountains in the opposite direction. They certainly scoped the scene…curious creatures! Reports back to the animal elders where not good 🙁

Probably wedge-tail eagles who are attracted to large fires (usually bush type ones) as rodents and small game can be seen fleeing in front of the fire by the eagles on high and they can then swoop and pick them off.
Luckily for the firemen that they don’t eat humans although there are some urban myrths about them carrying off babies in the early days.

Little worried about PCB – widely used as coolant fluids in transformers, capacitors, and electric motors.
PCBs also have shown toxic and mutagenic effects by interfering with hormones in the body. PCBs, depending on the specific congener, have been shown to both inhibit and imitate estradiol, the main sex hormone in females.
Limitation of the estrogen can feed estrogen-dependent breast cancer cells, and possibly cause other cancers, such as uterine or cervical. Inhibition of estradiol can lead to serious developmental problems for both males and females.

Apparently there’s barrels of sodium as well as the transformer oil on site. Both are terribly lammable and sodium must be kept under oil as it combusts on contact with air or water. Could be why the firies are having trouble putting the blaze out.

Most sources give a flashpoint of around 140-150 degrees.

The actual Monsanto MSDS for PCBs says they’re fire-resistant: http://www.nttworldwide.com/docs/PCBsMonsanto-MSDS.pdf
Some of the health claims in it are fanciful in light of what is known, including claiming that ingestion is “no more than slightly toxic”.

The fire fighting information is interesting. It warns water may not be effective, which ties in with the ESA comments this morning about needing to pull back when their earlier efforts didn’t do anything. Water simply cools the container and surrounds.

When it decomposes, such as in a fire, the following may be released: Carbon monoxide, carbon dioxide, hydrogen chloride, phenolics, aldehydes, furans, dioxins

One compound that may be released is 2,3,7,8-Tetrachlorodibenzodioxin, which according to another MSDS is one of the worst carcinogens currently known.

PCBs are absolutely nasty, but it’s also not very flammable on its own. Needs significant effort to ignite, and if there’s really only a small amount at the premises, it raises the question what (else) is really burning? All ESA reports keep referring to PCBs burning but I now highly doubt that, at least, not alone.

These 4 birds (not sure what kind but large ones) arrived at 9:15pm – did 6 loops around the smoke column. Then headed of to the mountains in the opposite direction. They certainly scoped the scene…curious creatures! Reports back to the animal elders where not good 🙁

How long is it going to be for the first law suit against who ever for pain and suffering?

Little worried about PCB – widely used as coolant fluids in transformers, capacitors, and electric motors.
PCBs also have shown toxic and mutagenic effects by interfering with hormones in the body. PCBs, depending on the specific congener, have been shown to both inhibit and imitate estradiol, the main sex hormone in females.
Limitation of the estrogen can feed estrogen-dependent breast cancer cells, and possibly cause other cancers, such as uterine or cervical. Inhibition of estradiol can lead to serious developmental problems for both males and females.

And we’re hearing multiple reports of more explosions on the site.

I was outside just awhile ago and am 90% certain I heard more explosions, about 3 big bangs, although not as loud as last night. I live a few k’s away in Downer

And we’re hearing multiple reports of more explosions on the site.

Evan Hawke - 5 minutes ago
Glory Hammer I totally agree that every area needs politicians who fight for there areas. Most of the politicians in my area... View
Vicki Herbert - 9 minutes ago
Glory Hammer haha. Hadn't noticed but will be on the lookout now.... View
Glory Hammer - 1 hour ago
Vicki Herbert, have you noticed that some of the candidates don't even know how to spell Yerrabi?! Not naming names, but if a... View
ACT Election 15

Canberrans won't be catching the buses from an underground city interchange after the idea was canned due to the cost....
ACT Election 21

@The_RiotACT @The_RiotACT
There’s a new food van on the block in Belconnen and it packs a ton of nostalgia & amazing Sri Lankan flavours https://t.co/aOH5vJ6z8f (32 minutes ago)