Hermits band together to be crowned national busking champions in Cooma 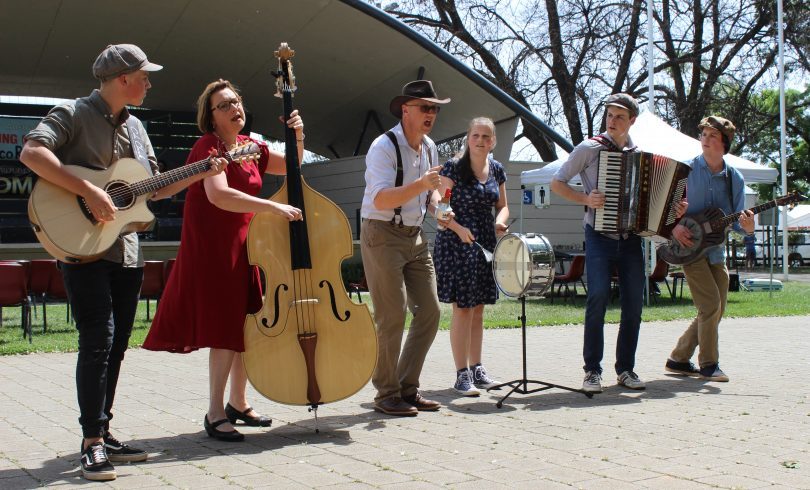 With an eclectic mix of instruments and sounds, the Haystack Mountain Hermits will return home to Queensland as this year’s Australian National Busking champions.

Hundreds of spectators gathered in Cooma’s Centennial Park for the national finals concert with the Hermits declared Australia’s best buskers.

The family-band from Tamborine Mountain on the Gold Coast wowed audiences on Sunday with their gypsy skiffle-blues style of music.

The tight-knit family travelled more than 1000km to compete in their second national busking championships.

“We do a lot of stage performances, but we just love busking acoustically,” Hermit double bass player, and mum, Kerrie Gambley said.

“The art-form of the good old-fashioned acoustic busk is getting stronger. We have Allan Spencer (busking championships founder and organiser) to thank for this.”

In 2017, the Hermits won best band and finished runners-up at the Australian National Busking Championships.

It’s been a successful year for the Hermits, taking out the best band and overall winners at the Queensland Regional Busking Championships in Stanthorpe.

The family of six began their busking foray back in 2011 with a trip around Australia.

The Hermits’ energetic performances have captivated audiences across the country. Earlier this year, they won the Toyota Busking Championships at the Tamworth Country Music Festival.

“The amazing thing about music is when you stand there and play as a group, everyone is happy,” Kerrie said.

In true skiffle blues fashion, the Hermits’ instruments vary from the weird to the wonderful.

Boasting a Donmo mandolin made from 100-year old corrugated iron, a double bass, and a homemade washing board, the instruments attract almost as much attention as their music.

“The washboard was made over a weekend in the shed. It’s a genuine Australian, homemade instrument,” Dave said. 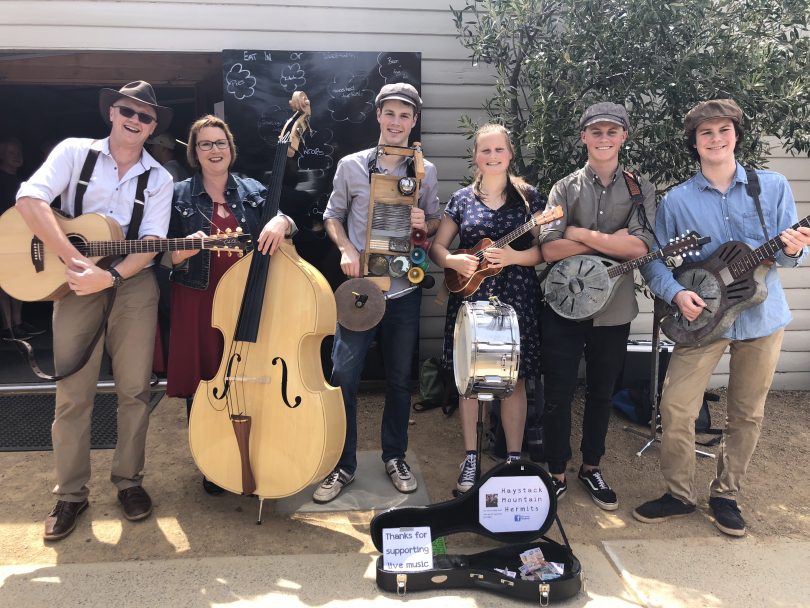 Being crowned national busking championships came with a nice paycheck for the Hermits who collected $2000 for their efforts.

The Hermits took time out of their busy schedule to interact with spectators and explain their unique style of music. One question often asked of the Hermits is the origin of their name.

“I grew up in the shadows of the Haystack Mountain. My parents are still there on a farm and it’s got a very strong connection in our hearts,” Kerrie said.

“The Haystack Mountain Hermits pays homage to our background.”

Allan Spencer said spectators were treated to a wonderful range of performances.

“Buskers from all over Australia were competing for cash prizes. The busking was free for spectators who enjoyed the great weather and listened to the fantastic music,” Allan said.

Original Article published by Nathan Thompson on About Regional.

Arleen Stark - 41 minutes ago
That is all very well Ian, but a branch does not have to be dead to fall. We have had 3 huge branches fall in the last 2 year... View
Colleen Whichelo - 2 hours ago
The trees need to be in the bush where they belong & where no humans reside. Bloody gum trees are the worst most dangerous of... View
Ulrich Belcher - 9 hours ago
Took a full 3 years to have a council tree inspected after I lidged the job and chased it up many times, even though it was a... View
News 240