AP_OZ has sent in his latest hexacopter adventures, this time with bonus hot air balloons in the skies over Canberra.

Hot air ballooning sped up is a hair raising business! 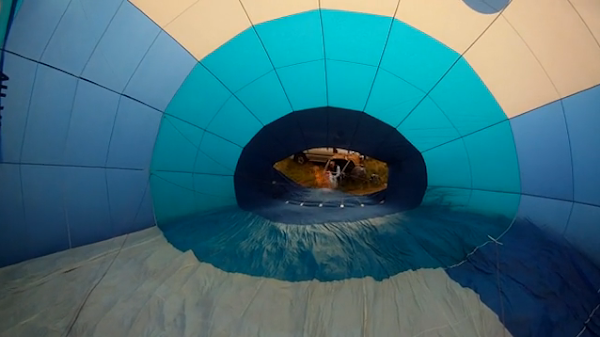 Thanks everyone! Comments are appreciated.

where is the Hexacopter?

Right behind the camera… 🙂

where is the Hexacopter?

When I went ballooning a few years ago (in Canberra) the landing was really soft, we hardly felt it, the pilot was very skilled. He could put it down wherever he wanted. He even flew it onto the back of the truck. Maybe it was good weather. It was very beautiful and special, but be prepared that the fire blast thing is very loud.

I did a balloon flight during the Balloon Fiesta a few years ago.Excellent experience!

The “Pilot” (This is the correct term) actually touched the basket onto the surface of the lake and skimmed across it.

The landing was a bit rough but was totally outweighed by the rest of the experience.

I thought they were having an emergency during the descent, with the way they were hovering so close to the rooftops of houses.
That’s supposed to be normal?

Damn, I think I’ll strike ballooning off my To-Do-B4-I-Die list.

It’s pretty normal I think – balloons generally don’t have a soft landing despite the floating around part being so gentle and peaceful. In my experience anyway.

Last time I was in one we landed in the little grassy bank next to the National Archive. We clipped the hedge as we came down (made a bit of a dent in it) which was a bit jarring – wasn’t expecting it! You really do need to get down in the basket and brace yourself! According to our balloonist (is that the right term?) the landing is usually the most dodgy part as they pull the chute and release the air at a certain height and they come down mighty quick!

My FIL (who admittedly has a flying phobia) often tells a story about a wedding he went to in the states where the bride and groom took off after their vows in a balloon. They then when on to have a very rough landing in a freshly ploughed field and the basket tipped and dragged them a short way as it was quite windy. No major injuries from his account, just a few bruises and scratches but it filled the basket with dirt and wrecked their clothes before the reception! Probably need to take it with a grain of salt but not a great start to wedded life!

But that’s why Canberra is one of the best places to go ballooning. In winter the crisp mornings create great conditions – very little wind so it limits the chances of you getting dragged like that.

I love these Hexacopter videos, fantastic as always.

I thought they were having an emergency during the descent, with the way they were hovering so close to the rooftops of houses.
That’s supposed to be normal?

Damn, I think I’ll strike ballooning off my To-Do-B4-I-Die list.

I’ll take this as a tribute of some kind to the nine charred bodies still lying in a field north of Wellington.

My apologies if the above is meant to be a positive comment but it doesn’t read as such.
I was flying at the same time and it was not until after we landed that we were informed of our friends accident in New Zealand.
Any human death is a tragedy and our thoughts go out to the Pilot Lance Hopping’s family and the family’s of the 10 passengers that died.
It is a tragedy that will deeply affect the Wairarapa community for years to come.
The ballooning community both in New Zealand, Australia and further abroad are in shock.

The accident will be investigated but it won’t bring friends and family members back.
A sad day.

I love these Hexacopter videos, fantastic as always.

I’ll take this as a tribute of some kind to the nine charred bodies still lying in a field north of Wellington.

Ashley Wright - 13 hours ago
Jennie Smith vast majority of the tram works were done in the median strip of flemmington road with minimal impact. There was... View
News 5

sisyphus - 14 hours ago
Better still, read some up-to-date peer-reviewed research. That film is primarily attacking historical straw men, presenting... View
jwinston - 21 hours ago
Watch “The Planet of the Humans”, a documentary by Michael Moore, to see the lie of renewables and so-called green energy... View
News 4

Robert Hawes - 14 hours ago
Should be done via the nurse walk-in centres. View
Lyn Christie - 19 hours ago
Ian E Wheeler maybe somewhere you can register if you don't see community nurse and are unable to get out to receive the shot... View
News 24

JC - 14 hours ago
Actually think you will find this “outcome” actually backs up my comments. Do you think both parties came to a $400,000 a... View
chewy14 - 15 hours ago
JC, The other week you were claiming the silence was due to pending litigation which now as we see (and I said) was false. Th... View
JC - 16 hours ago
Life doesn’t work like that. It’s quite clear that for the last year they have been in dispute with the builder over this... View
Community 20

Sandra Bowe - 16 hours ago
Karin Hill thanks for the link Karen, just called the hotline as buzzing still evident in ceiling, good to get advice .. View
News 3

grump - 20 hours ago
Except it's not a bakery and a hairdresser is it? It's something that involves significant emotion for people, and should hav... View
show more show less
*Results are based on activity within last 7 days

Police have confirmed that part of a torso found on Mollymook Beach on 26 February belongs to a man from...
Breaking 2

ACT Policing has released a video to help identify people involved in an incident that took place in Civic at...
Lifestyle 27

On cloud nine in Canberra’s very own hot air balloon

Canberra Day Trips: Take to the skies in Canowindra

@The_RiotACT @The_RiotACT
Zoya Patel says it would be naïve to think sexual assault and harassment allegations are confined to Parliament House - we all have a role to make society and workplaces safer for women https://t.co/ICaSHvQ3C0 (48 minutes ago)

@The_RiotACT @The_RiotACT
Spacey Jane returns to Canberra this weekend, playing two massive shows under the lights of the @canberratheatre. Find the details in this week’s #GigGuide, which features all the best shows in town https://t.co/MNHOt93RAV (11 hours ago)