Hey Dad, can you pick me up from Josh’s, otherwise it’s like two buses 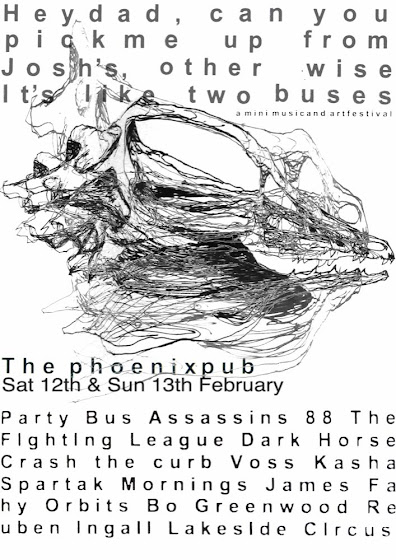 Hey Dad, can you pick me up from Josh’s, otherwise it’s like two buses is an exciting two day mini-festival showcasing 14 of the best up and coming independent bands Canberra has to offer. Performing at the event are triple j unearthed winners Crash the Curb, Party Bus, Assassins 88, The Fighting League, Voss, Kasha, Dark Horse, Spartak, Mornings, James Fahy, Orbits, Bo Greenwood, Reuben Ingall and Lakeside Circus. + more to be announced

The festival will also showcase artwork from some of Canberra’s best emerging visual artists which will be exhibited throughout the venue.

The musical styles will range from garage, hip-hop, punk, electronic, acoustic, experimental, modern jazz, surf rock and ambient – just to name a few. It will be a dense and eclectic local musical experience; one that the Phoenix Pub has never seen the likes of before. This event highlights the Phoenix’s unrivalled support for local talent. The space will be decorated by a group of Canberra’s most promising emerging artists; it’s sure to look as amazing as it will sound. Best of all – the event is free.

11 Responses to Hey Dad, can you pick me up from Josh’s, otherwise it’s like two buses
Filter
Showing only Website comments

‘Waterford’ have just been added to the lineup. (playing on the Sunday)
They are the eels hips. Listen to them here – http://www.myspace.com/waterfordtherockband

what a stupid name for a festival.

Thanks! Personally, I prefer the term ‘silly’. But it’s great that you understand. I was worried that that it would be hounded by the kinds of people who say thing like “Monty Python makes no sense. What rubbish”.

Not to mention the illiterate-looking design of the poster. The event might be cool, but the advertising certainly gives no hint of that being the case. Nothing wrong with being funky and quirky, but I know 12-year-olds who be embarrassed to produce something looking like that, especially since you can’t even figure out the performers’ names.

Sad to hear that the poster is not your cup of tea. Personally, I love it. It’s by a local artist who graduated from the ANU School of Art with first class honours. http://robbiekarmel.wordpress.com/
If you’re having trouble reading the band names, I can organise a ‘safe’ poster for you. Like those phones with huge buttons old people have.

P.s. And whoa whoa whoa, I never mentioned anything about the event being ‘funky’.

kind regards to you and your gang of 12 year old prodigies,
Bloviate

I was thinking that if you need your dad to pick you up then you are probably too young to be at the Phoenix.

In addition, the logo thing looks like bunyip skull.

It’s enough of a conceptualist pun without me adding to it.

The poster is actually very clever, looking at the title it actually reads;

“Heydad, can you pickme up from Josh’s, other wise It’s like two buses”

You don’t have to be Sherlock Holmes to work out the crafty hidden message theer!

It’s enough of a conceptualist pun without me adding to it.

The poster is actually very clever, looking at the title it actually reads;

“Heydad, can you pickme up from Josh’s, other wise It’s like two buses”

You don’t have to be Sherlock Holmes to work out the crafty hidden message theer!

Here’s the opposing POV: what a stupid name for a festival. Not to mention the illiterate-looking design of the poster. The event might be cool, but the advertising certainly gives no hint of that being the case. Nothing wrong with being funky and quirky, but I know 12-year-olds who be embarrassed to produce something looking like that, especially since you can’t even figure out the performers’ names.

Great name for a festivus!

Great name for a festivus!

Damn, thought the article was a rant about Action buses for a moment 😛

Tjilpi1 - 16 minutes ago
The ACT Government denied all the way along that tjey would not be building over the existing lake bed ... that it will all b... View
Colin Vivian - 50 minutes ago
Elroy Jones and if you look at the ACT audited financial statements you’ll find net financial liability, net debt, net oper... View
Elroy Jones - 3 hours ago
Ruth Brown that’s because they’re underground (where they should be!!) DA won’t get through this Gov without serious at... View
News 1