There was a fair amount of excitement between myself and my husband and our dining companions (we all find it pretty hard to get out) over dinner plans last week. We got ourselves into a flap over which of the hip and trendy (I suspect I give away something of my age by using those terms) establishments in and around Kingston or Acton we should go to. After a couple of rejection calls (who knew there were restaurants in Canberra that needed such advance notice?) we were getting a bit worn down by it all when someone suggested we try Kusina in Cooleman Court. As Weston Creek locals we figured it was worth a shot.

Kusina is a little Filipino restaurant that looks like ‘just another coffee shop’ from the outside, but in truth really is a bit of a gem. So much so that although I went along getting away from work for a while I thought I’d better share the experience with you lovely folk, even though I notice it has already been reviewed for breakfast.

We went for dinner and were seated at a nice big table by the window. The restaurant was busy but not packed and vibrant without being too noisy.

Before sitting down I couldn’t have told you anything about Filipino cuisine and had assumed it was similar to surrounding regions with stir-fried this and grilled that and lots of rice and noodles. I was wrong. The meal was more like tapas – Asia style 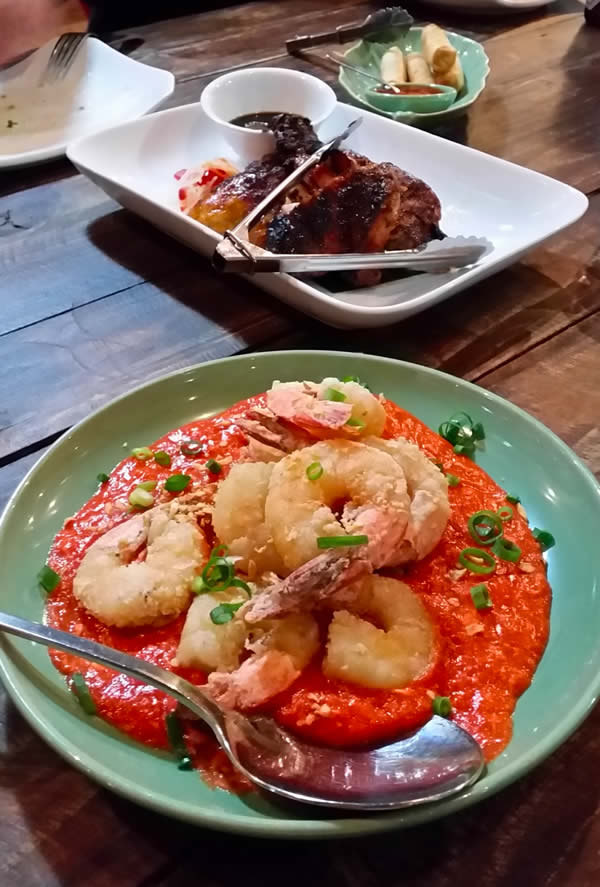 The mains were fantastic. The food was full of flavor without being overwhelming. The setting and style of eating were social and we were in no way rushed. The whole experience was washed down well with either red wine or beer (and I’m sure white would go just as nicely).

I found out during dinner (from a worldly dining companion) about the Spanish heritage of the Philippines, which was strongly reflected in the food.

The desert was also good although not as much wow factor as the mains. The banana spring roll was tasty but could have done with some brown sugar (but I do have a sweet tooth) and the flan was lovely although not as creamy as I have had before. The lemon sorbet was beautifully tart, although an odd combination with the flan.

The service was friendly and helpful without being in our faces and at the end of the meal, a man who I assume was the owner came to check everything was OK.

All in all it was a surprising experience and we were reminded that sometimes you don’t have to go far for a real culinary treat and a great night out.

Small bonus – these guys are running an offer on LivingSocial as we speak. I’ve got mine 🙂

Carly Maree - 7 hours ago
I love how people act surprised when this city has some of the worst crime I’ve ever encountered? I lived in Sydney for 8 y... View
theroundone - 18 hours ago
Who's getting punished, though, asides from law abiding rates payers in this city? A racial or sexist epithet is treated more... View
News 1

HiddenDragon - 10 hours ago
The report aired on ABC Canberra news tonight about the devastating impact of the hailstorm on important crop resilience rese... View
News 12

mark boast - 11 hours ago
Why the rage against e-scooters? I ride the paths a lot on my bike and for the most part I see people behaving well and enjoy... View
Food & Wine 28

Rohit 'Swarley' Singh - 15 hours ago
The old demand a 50 upfront then charge you cause you're cooked again View
Buck Johno - 1 day ago
From what I remember of night rider busses it was only over summer. View
News 7

Lolo and Lola – delivering the taste of Filipino hospitality to Canberra

Super Bao at Dickson: Big flavours in a small bite

Knuckles Restaurant: bringing a whole lot of Oom Pah to the table

@The_RiotACT @The_RiotACT
The Dirty Sunflowers will be joining Slagatha Christie & Highland Light on stage this week. Find the details in our latest Gig Guide https://t.co/dJxSjsQRbd (8 hours ago)

@The_RiotACT @The_RiotACT
Multicultural Eats: Where to find the best Indonesian food in Canberra https://t.co/v5lPRYRs5P (10 hours ago)

@The_RiotACT @The_RiotACT
The ACT Government's about to launch its biggest-ever domestic tourism marketing campaign. What experiences would you promote to Australia? https://t.co/Oe3GbmEsGw (12 hours ago)