An hilarious video promoting Canberra (with special appearance by the Minister for Tourism, Andrew Barr) has been uploaded:

The video is also accompanied by an even more hilarious travel story by author of Funny English Errors and The Funny Dictionary, Troy Simpson, which shows the funny things that can happen when accents get in the way of clear communication.

The video and story are part of a campaign by My Destinations.

If Troy’s video and story makes the top-5 voted entries, he stands a chance at travelling the world for 6 months blogging about his adventures.

[ED – While not convinced of the hilarity of the video in Troy’s self promotion we feel Andrew Barr’s involvement should not go un-noted.] 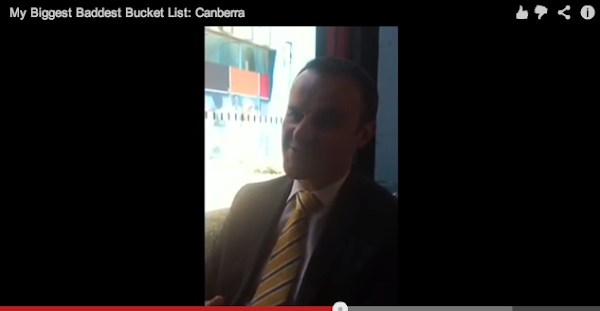 I prefer this take on Canberra http://ambientinclinations.blogspot.com.au/2013/02/canberra100-real-canberra-revealed.html

Some people have been asking for a sequel. Not sure about a sequel, but here are the hilarious* outtakes: http://youtu.be/1xUzdGGR7dk

“Canberra – Why not?” – this is Flight of The Conchords do Canberra. Looking forward to the sequel, with the Topp Twuns. It did get better towards the end though, particularly while the lovely Andy was delivering his flawless spiel

I found it very funny. Like to see some of you guys get up and do something other than whinge on here. Troy I have shared the video and wish you goodluck.

Hey! Lameness is my trademark :p

Hilarious? Not sure I was watching the right video…

Does anyone else recall the Leyland brothers? If drunk, or whatever enough, you can watch them and laugh. Because their relentless enthusiasm and dagginess is funny.

The best thing about this vid is Andrew Barr’s tie. It is almost as thick as the commentary.

I am usually quiet about things of an artistic sort which I don’t like, as there is more than one way to approach any subject. But this was truly, inutterably, dreadfully, unfunny.

“It’s the home of the Australian Story”. Yeah right, most of the world still thinks Sydney is the capital city of Oz. “the National Arboretum has the best views in Canberra”. You have to be kidding right? Black mountain has a much higher altitude and can actually see Gungahlin and Belconnen. Go up towards the mountains and get a real view of our capital. Typical of politicians, half truths and fallacy.

Pr0n shopping with a Green bag…

His moral compass must be getting a beating.

Honestly, it was pretty lame with some very tired jokes.

Just like Julia with a G, if you enter enough competitions you’ll eventually win one…

More people should speak in the third person!

More people should speak in the third person!

JS9 - 3 minutes ago
Amen to that BJ - not just for those wanting to downsize, but those people that may actually want to have families and stay i... View
JS9 - 2 hours ago
Not saying it isn't true Nick, but is there any reasonable, valid research that has been done around housing preferences any... View
bj_ACT - 3 hours ago
How about Canberra developers start building apartments that are big enough and of a high enough quality to encourage mature... View
Opinion 32

yellowredme - 57 minutes ago
What makes this company think Canberra wants drones? They have ads on Facebook for gelato and banana bread delivery, along wi... View
Andrea Wild - 4 hours ago
Ian Bushnell, it's interesting that you call Wing's approach "softly-softly". I'd call it sneaky-sneaky. Why wouldn't they te... View
Property 8

Elroy Jones - 1 hour ago
Kate Tricks it is exactly what we need. Why do you think houses are so bloody expensive here?? Because there aren’t enough! View
JC - 2 hours ago
Attractiveness is in the eye of the beholder. I often wonder how an ugly mug like me found a good gorgeous wife, turns out th... View
54-11 - 5 hours ago
I've been to 2nd and 3rd world countries where people are living cheek by jowl, and they can design some very attractive buil... View
Opinion 22

Hindmarsh's massive three-tower mixed-use development in Woden has been approved, adding more than 400 apartments to the Town Centre. The...
What's On 8

@The_RiotACT @The_RiotACT
After a rocky and uncertain year for live music, the triumphant 2021 @TheCIMF was a smashing success https://t.co/0PGZdEzMOQ (3 hours ago)