Hilltops mayor’s eye is firmly on the (amalgamated) future 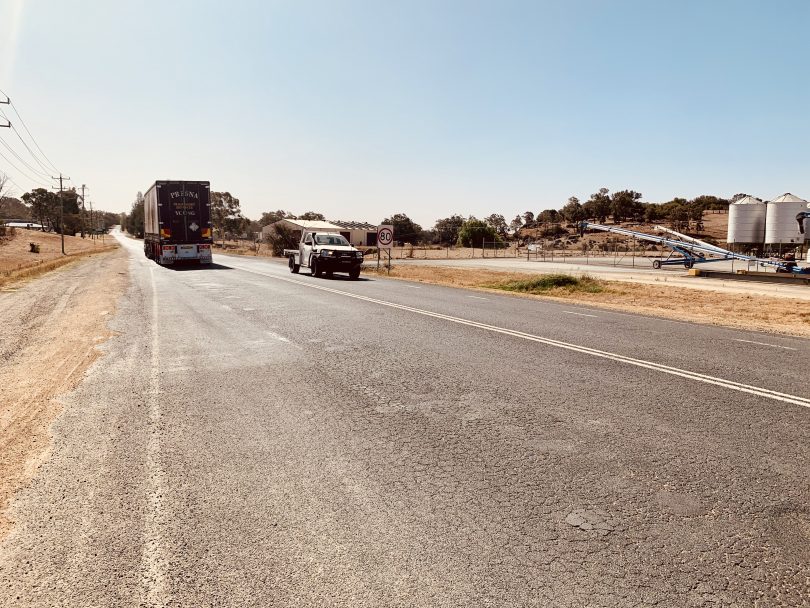 The bone-shaking Milvale Rd is set for an update if NSW road funding comes through. Photo: Edwina Mason.

Arranged marriages were likely not figuring large in Brian Ingram’s mind when he first signed up to be a councillor.

But the past four years may have seemed that way as he witnessed the somewhat reluctant merging of the three rural councils of Young, Harden and Boorowa to form Hilltops Council, with a population of 18,500 residents covering an area of 7,100 square kilometres.

The now mayor has overseen the good ship Hilltops since the first local government election of the new council in 2017 and, from his bow, he sees consolidation as the primary port of call for 2020.

About Regional spoke with Cr Ingram last week about his hopes for the year ahead; a list that still requires some stitching for true unification and is topped by completion of the Local Environmental Plan (LEP).

For those not in the know about such matters, LEPs are the main planning tool to shape the future of communities and ensure local development is done appropriately. Zoning and development controls provide a framework for the way land can be used and guide planning decisions for local government areas.

For an area nearly three times the size of the former Young Shire Council with three times as many towns and villages, the mayor says updating the LEP was a huge and complex task, built around economic and freight studies with a view to the decade ahead.

Expected to be finalised in September 2020 and 12 months already under the council’s belt, Cr Ingram says he is looking forward to hearing from the community, which is the next stage.

“I’m looking forward to more consultation with our community to gauge their expectations and what they’d like to see happen and that’s always a challenge to gather that information,” he said.

Meetings and pop-up stalls are in the pipeline, as well as an online component allowing for direct communication.

“We need to have local input on our local plan.”

Cr Ingram said he had hoped to see rate harmonisation implemented across the LGA in 2020 but in September Hilltops Council opted for the 12-month extension offered by NSW Local Government Minister Shelley Hancock, with a new rate structure now likely from July 2021.

“We have to bring the rates of the three former areas into harmony,” he said, “a process that won’t be that difficult but because of the political aspect there are bound to be winner and losers.”

But 2020 will see completion of major works across the council area, including Young’s historic Alfred and Cranfield ovals, Young Aquatic Centre, and ground will be broken on a new $500,000 all-purpose playground.

On the eastern side, Boorowa is set to benefit from a new undercover horse arena and there are high hopes that a meeting with NSW Water, Property and Housing Minister Melinda Pavey in Sydney this week will yield safe and secure water for Boorowa.

“Fifteen years they’ve tried to get a better water supply and we just have to get some funding for it,” Cr Ingram said.

“Boorowa is 120 kilometres from our nation’s capital … and it can’t grow unless we get this sorted.”

And for those whose teeth have nearly fallen out travelling on the Milvale Road to Young – the mayor is gunning for state government funding to match around $950,000 in federal funding announced in 2018 for road upgrades.

“The first round we were knocked back for some reason so we reapplied,” the mayor said.

“We can’t spend the $900,000 from the federal government until it’s matched by the state and I would be very disappointed if the state doesn’t match it this time.”

Samuel Gordon-Stewart - 5 minutes ago
John Hawkins I’m all for optional seatbelts (and optional helmets, for that matter). A spike in the steering wheel, while i... View
Stuart Brogan - 6 hours ago
James Hutchison of only there was a cycle network. View
Stuart Brogan - 6 hours ago
Carole Ford you are close, except cycling is actually not that dangerous, it is sold that way. The life expectancy of a cycli... View
News 19

Julie Macklin - 4 hours ago
No, not everyone has young children. If someone wants to stay away from things on Sunday, they can now. They can make their o... View
Christopher Cuba Rabanal - 7 hours ago
How about a six day week with every Sunday shut. Where everything is closed in a Sunday Sunday is family Day ?... View
Valerie Foster - 10 hours ago
Been talking about that for years. View
Community 38

JS9 - 5 hours ago
So Tim, where is anyone telling you you have to buy an EV now? Noone is, and most will purchase an EV when it stacks up for t... View
Futureproof - 12 hours ago
Great, I'll spend $70k so I can save on my electricity bill View
Community 44

Colin Ball - 7 hours ago
Why do they get game consoles?it's meant to be a place for punishment not reward, what about the people who have worked hard,... View
Steve Whan - 8 hours ago
Just curious, do instigators of damage have their terms effected due to vandalism caused? I dont know. Just curious. View
Inca Serrated - 10 hours ago
Not a single mention of the conditions that prisoners are living in... Lockdowns, no family contact for over a year, no meani... View
Lifestyle 14

Snowy 2 hydro bounty to flow out to Hilltops region