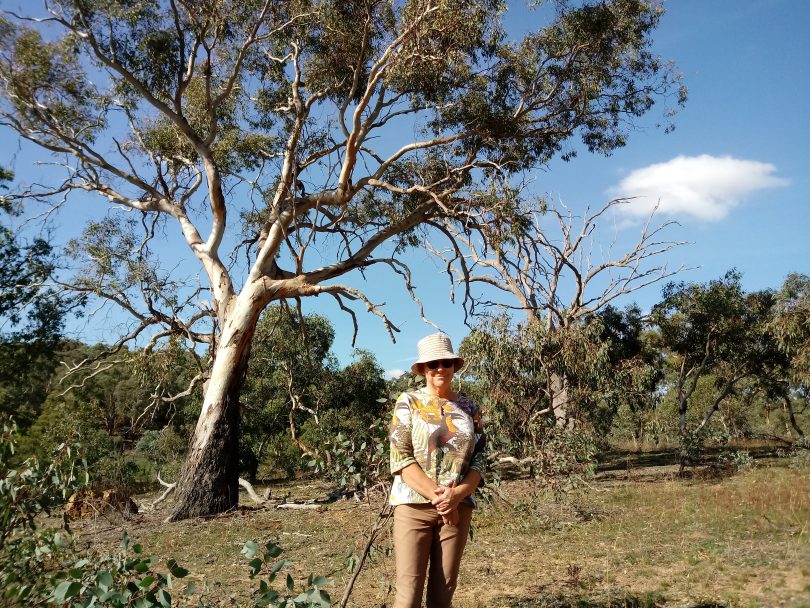 Jacky Fogerty from Hughes says the site is home to many species and needs protection. Photo: Ian Bushnell.

Plans for a huge storage facility on vacant land next to Red Hill Nature Reserve have been scuppered by the planning authority for environmental reasons.

Hindmarsh, through Purdon Planning, had sought a lease variation to increase the gross floor area allowable on Blocks 7 and 8, Section 66, Kent Street in Deakin from 500 square metres to 20,500 square metres, which would have meant the proposed development would have covered the site, and according to the Red Hill Regenerators spilled over into the Reserve and adjoining blocks.

The Regenerators in its objection to the application said the land was unsuitable for such a development because it contained critically endangered woodland and was an important habitat of threatened species, and that the application had been lodged under the wrong assessment track, and needed to be considered for its environmental impact.

The Environment, Planning and Sustainable Development Directorate agreed, saying in its Notice of Decision that the application required an Environment Impact Study and should be lodged in the impact track.

A Hindmarsh representative said both the decision and the extended amount of time to reach it were disappointing, and the team was currently reviewing its options.

Hughes resident Jacky Fogerty, who has been involved in the fight against the proposal, said the decision was good news for Red Hill and its wildlife.

“We know this is not the end. We don’t know what future development applications or other rezonings or plans Hindmarsh might have for the land,” she said.

“We are worried about that but very relieved that the 41-fold increase in the area allowed for building didn’t go through because it would have obliterated the woodland.”

The Notice of Decision said the DA, lodged in April 2018, had not demonstrated that the increase in floor space could be achieved considering the environmental significance of the area and the surrounding landscape, or without clearing a large part of the site.

The proposed development was also incompatible with the surrounding area, which is predominantly woodland, with indicative plans showing large expanses of concrete and container-shaped structures.

The Conservator of Flora and Fauna had advised that the proposal would have an adverse impact on nationally significant environmental features and that it be referred to the Commonwealth for assessment under the Environment Protection and Biodiversity Conservation Act.

Section 66 in Deakin where Hindmarsh proposed its storage facility.

The Regenerators group says in its objection that the Red Hill woodland is one of the largest remaining remnants of the endangered yellow box – Blakely’s red gum grassy woodland in Australia and is home to vulnerable species such as the Gang-gang Cockatoo – which has the first confirmed successful nesting site in Canberra there – Little Eagle, Scarlet Robin and Speckled Warbler, as well as nocturnal animals such as sugar gliders.

The group had also objected to the scale of the proposal, which included night lighting, and its visual impact on the area.

Hindmarsh had originally proposed a multi-unit residential development on Section 66, which borders the Red Hill Nature Reserve on its northern and eastern boundaries and lies opposite Alfred Deakin High School and the Deakin Offices. The more than 25ha site also contains a Telstra building and the Deakin Offices.

Hindmarsh’s plans changed when the Legislative Assembly required an integrated Planning Study for Red Hill, prompting a moratorium on residential development and Hindmarsh to propose an alternative use of the site consistent with the current TSZ2 zoning.

On 25 October 2017, the Legislative Assembly passed a motion calling for the ACT Government not to proceed with Territory Plan Variations for Section 66 Deakin (Kent Street) and the Federal Golf Course until an Integrated Plan was developed to protect Red Hill Nature Reserve and surrounds.

Ms Fogerty said groups opposed to development on the site didn’t expect anything to happen before the Integrated Plan was finalised.

“We hope that when it is finalised it provides appropriate protections for the woodland, and particularly the wildlife,” she said.

Many thanks for an excellent, informative and balanced article.