History lives on in Queanbeyan thanks to Canberra’s Green Shed 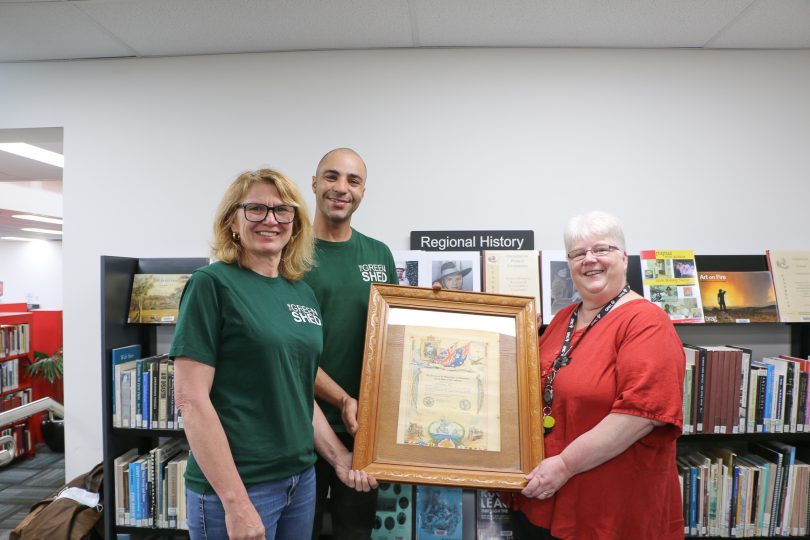 Brigid Whitbread has no idea how a historic Queanbeyan document landed at Canberra’s Green Shed – she’s just immensely grateful it didn’t end up as landfill.

The document is a World War II certificate presented to Bert Sheedy, one of Queanbeyan’s leading historians. His writings form the cornerstone of the city’s local history collection, which ranges from books, Moneroo to Monaro: history of Monaro Street, 1830s-1995 and Queanbeyan, to his work on the three volumes of Queanbeyan: Pioneer Cemeteries, Burial and Index.

He also recorded a number of oral histories about Queanbeyan which are kept in the National Library of Australia.

Such is the value of Sheedy’s work that Brigid Whitbread, Queanbeyan-Palerang Regional Council’s local history librarian, literally “screamed for joy” when she saw what Sandie Parkes from the Green Shed had not only saved from landfill but donated to the Council’s collection.

“Bert’s family had donated filing cabinets full of local and family history, so receiving this document is worth its weight in gold,” Brigid said.

“He was a great advocate for Queanbeyan,” she said. “His writings are the foundation for our own local history collection here.”

Such certificates were presented to personnel who served in World War II by the Councils of the Municipality of Queanbeyan and the Shire of Yarrowlumla.

He was awarded the British Empire medal in 1972 for his contribution to local history.

Brigid said usually such documents would go to the city’s museum, but given Bert’s connection to local history, the framed certificate would stay with the library’s local history collection.

“That’s usually my demarcation line – I keep the documents. But with this, I just couldn’t part with it,” she said. “It is such an important part of our local history collection.

“It is in remarkably good condition considering its age … there’s only just a little bit of foxing. But we plan to get it stabilised.”

The certificate will also be remounted in its frame to ensure it lasts for future generations to see it. 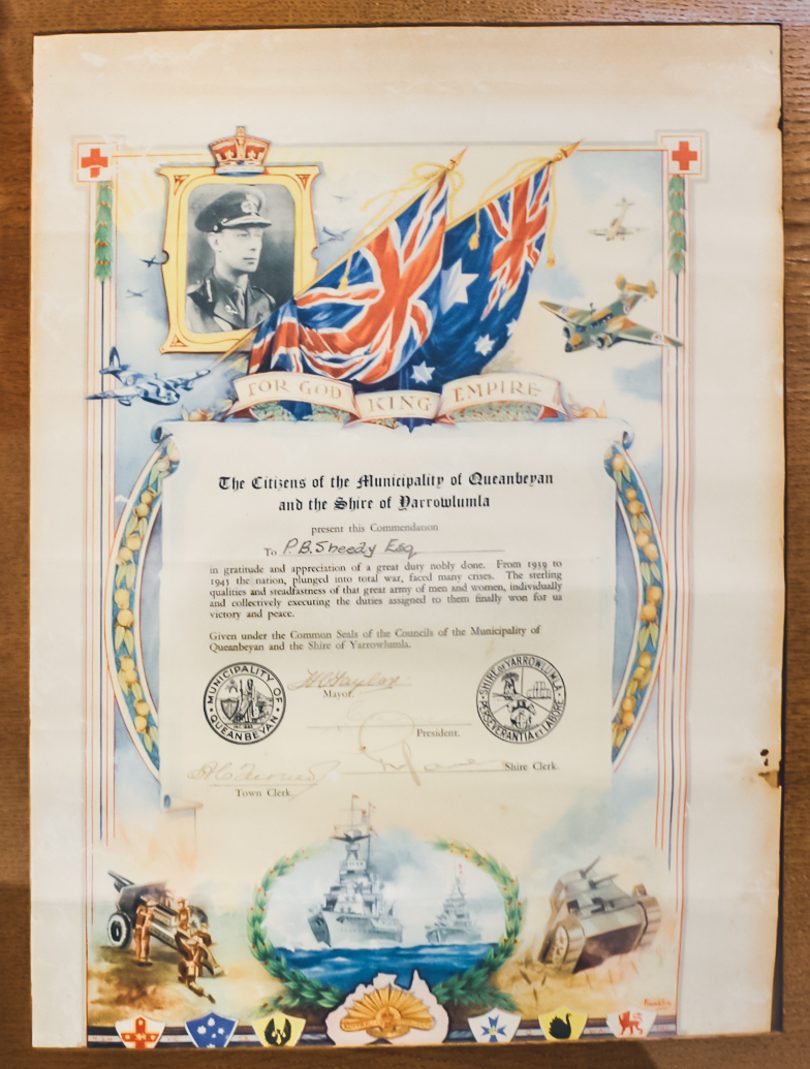 Brigid said the connection formed with Sandie and the Green Shed was invaluable to the library specifically, and local history in general.

“We are so grateful she took the trouble to pass this on to us,” she said.

Brigid said in today’s world, people seemed to have more of a sense of urgency when it came to getting rid of “stuff”.

“Like when a person dies, for example, something that may be important to them, not necessarily in terms of monetary value, but what is the best plan for it, where should they pass it on to? We don’t want these things to end up in landfill.

“It only takes one generation to lose a story.

“Someone like Bert is a good example. When I started researching him, I found it quite tricky to find much information at all. It became clear that he wasn’t the sort of fellow who liked to blow his own trumpet.”

But she did find out a few interesting facts. “Turns out his family has been in the region since the mid-1800s. Apparently, he was born under the wagon his family was travelling in taking sheep to the Sydney Show.”

It’s not the first time Sandie from the Green Shed has recognised the worth of an item and ensured it found its rightful home.

“It is in amazing condition,” Brigid said. “We’ve determined it’s a Bank of NSW ledger. Interestingly, at the top of each page of the ledger is the person’s credit limit. In 1885, the Queanbeyan Council was there, but as it was in its first year of operation, it did not have a big limit.”

Bert died in 2000, but thanks to the Queanbeyan Library’s local history collection, his story lives on.

I have a copy of the one given to my dad

Peggy Sue I would love to talk to you about your certificate. If you had a moment to call me at Queanbeyan Library I would be very grateful.0262856256.Do you know when it it was presented? Many thanks Brigid Whitbread

A wonderful find that is now fully appreciated. Also it has ended up in the right place. There has been much email traffic about Bert Sheedy in the local history network. Local history is so undervalued in the ACT that non-government organisations are charged massive rents and it takes most of their efforts to pay it rather than help promote Canberra’s history.

Robyn Holder - 17 minutes ago
Need to fine people. View
Andrea Mya Riboust - 57 minutes ago
As someone who answers a public phone line all I can say is that this doesn't surprise me at all. People are mindless, indeci... View
Kunal Chaturvedi - 1 hour ago
Well not that police will respond. fill a form that is archived to a tape drive for posterity. 😊 View
News 10

BM - 1 hour ago
NO, most Canberrans would be against dumping out in Wallaroo and Sutton, so we're not bullies. It's just that our Canberra Mu... View
News 68

Stan Nimmo - 1 hour ago
Jenny Graves hopefully they make good their promise otherwise it could get nasty…I’d like to see some response metrics to... View
Stan Nimmo - 1 hour ago
Police in name only, I’m sorry to say this but it’s my experience that ACT police are not resourced to investigate burgla... View
Jenny Graves - 2 hours ago
We need to press for more in the budget for the police. View
Community 8

Kiriel - 2 hours ago
If the war memorial expansion truly was focused on bringing more focus on recognising the horrors of war, that would be one t... View
Courts & Crime 2

Of all the legislation that the Morrison Government has decided to prioritise, its voter identity bill is arguably the least...
News 68

The outsourcing of Australian Public Service (APS) work, including the use of consultants, has been described as an industry full...
Opinion 57

A full Lake George is an exceptional sight. Following heavy rainfall throughout 2021, the lake, which is situated 40km northeast...
News 25

@the_riotact @The_RiotACT
Stocking up for #Christmas lunch? Want to make it special? It's returning to business as usual for regional farmers as lockdown's lifted and more produce crosses the border for the @CRFarmersMarket at EPIC https://t.co/yjQmiswzVQ (30 minutes ago)

@the_riotact @The_RiotACT
Sportspeople from the #Canberra region have been more prominent than usual on the #world stage lately. Check out some of the performances you might have missed (and the incredible try from the Women's Australian @Aussie7s team in Dubai) https://t.co/6sXhuHCunG (1 hour ago)

@the_riotact @The_RiotACT
RT @Breaking_247: A 27-year-old woman accused of trying to find a hitman to #murder her parents on the dark web is back behind bars again a… (2 hours ago)