The year-old review, revealed after a journalist’s freedom of information request, exposed a dangerous workplace culture in which trainee doctors were overworked and subject to capricious roster and leave changes that left little time for training.

They also said most of the training program was scheduled after hours.

The review found a delay in the appointment of a new ACT Network Director of Physician Education led to a breakdown in the training structure, a lack of mentoring and disengaged senior clinicians.

The review identified a lack of pride in the training program, poor communication between the training team and clinicians, no teaching champions, and no incentives or rewards for teaching, mentoring or examining.

Some of the review’s findings echoed that of the wider workplace culture review in Canberra’s hospitals and notes a period of instability and conflict preceding the decline in doctor training.

CHS has assured the public that patient care had not been compromised and that 38 of the 54 recommendations have been implemented including leave management plans, two hours of protected and guaranteed teaching time a week, trial exams, increased mentoring and greater involvement from senior clinicians. 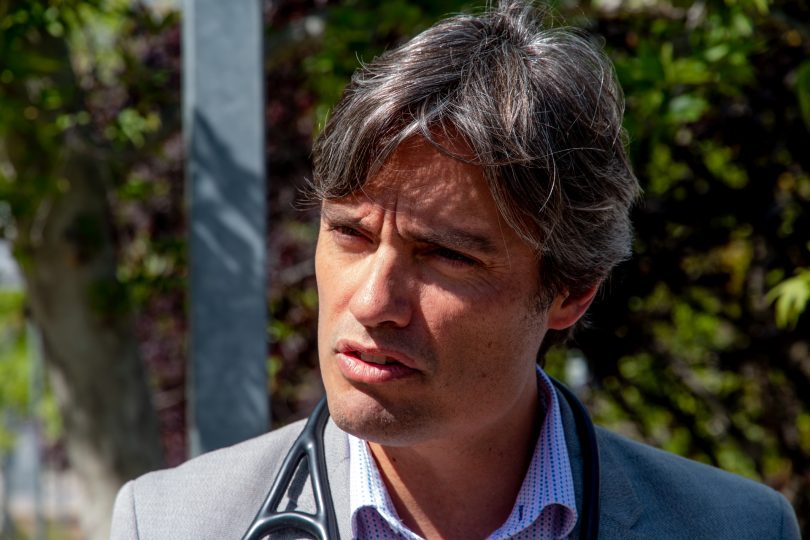 Dr Nick Coatsworth: ”I’ve come back to an improved culture, and if that’s not being felt by our physician trainees I personally want to know about it and act to fix that.” Photo: Dominic Giannini.

Executive director of medical services Dr Nick Coatsworth said the exam results were clearly unsatisfactory and the review’s recommendations were not unexpected.

He said Canberra’s hospitals had all the right ingredients to have excellent pass rates and continue to provide excellent care to patients.

”We want to be a preferred employer of excellent physician trainees but to have that we’re going to have to have several years of consistently improving exam results,” he said.

Dr Coatsworth said it was just not possible to study and work 150 hours a fortnight, as well it not being safe.

”If that happens we are in direct contact with that unit making sure that work is more equitably distributed,” he said of the safety net implemented to stop excessive work hours.

The review recommended more teaching staff and Dr Coatsworth said the number of staff required for the physician training program was being reviewed.

He said clinician engagement had improved with an increasing number of physicians actively involved in the exam process.

”Amongst all our physicians there is an expectation that they contribute to the teaching program at Canberra Hospital,” he said.

Dr Coatsworth said there had been significant cultural changes at the hospital, and frequent checks were being made to see how trainees were going.

”I’ve come back to an improved culture, and if that’s not being felt by our physician trainees I personally want to know about it and act to fix that,” he said.

Canberra’s trainee doctors have not yet sat their 2020 exams due to the pandemic, but will do so in coming months.

Val Kuta this was the article I was talking about

If nearly 20% of Canberra hospital users come from NSW this is hardly a simple Canberra issue, do NSW pay us there fare share of the costs?

And yet it healthcare costs more in the ACT than in any other state in Australia. One has to wonder where the money is going

I’m only aloud to drive 12hours with a 1/2hour break every 5hours. I can’t imagine trying to think clearly making life decisions after that time. Criminal.

Last night was very busy. These poor doctors. We arrived before midnight and not seen by a doctor for over 4 hours. Then needed to see another who wasnt available until after 8am. Not their fault, but not ok

Canberra hospital could be and should be a very high ranking hospital but for years it has had lots of problems. If it’s common knowledge a hospital has a bad reputation then no one will want to come and train here and your can’t blame them. It needs a complete overhall

So nothing as changed in 16 years

Sharen Petrovsky yup and look which party's keep getting voted in, nothing will chang in our health systm while they govern the ACT

Shannon Rellik - 2 hours ago
Sarah Jane yass please 😂😁 View
Sarah Jane - 3 hours ago
Shannon a day trip? View
Maya123 - 7 hours ago
Some gorgeous things there, but there are only so many cushions, vases, etc, you can have, before it becomes clutter. View
Lifestyle 15

Sandra Stevenson - 3 hours ago
Sylvana Whyte Good idea! View
Jennifer Blood - 5 hours ago
Very interesting explanation of how the buildings were constructed and leased, leading to the lack of uniform upkeep we see t... View
Iaian Ross - 7 hours ago
"To have time out, she would walk to Manuka Pool for a swim and walk back in time to be ready to cook the first breakfasts of... View
News 24

Asha Kidd - 4 hours ago
Is there a go fund me for these guys? View
Adam Jovanovic - 1 day ago
You'd be surprised how many people vote for the government that screws them over the most. Mainly.because.of alarmist.and exa... View
Opinion 17

Acton - 7 hours ago
Housing unaffordability is a consequence of Greens/Labor ACT Govt policy. Here's why: Restrict land releases - drives up the... View
Ol L - 9 hours ago
Not true according to Mr Barr Mr Barr said the analysis showed the stamp duty reductions were helping first-home buyers and l... View
News 3

Peter Curtis - 8 hours ago
I cannot agree more. View
Nick Swain - 9 hours ago
And so do the equally old Kingston shops. Both shopping centres have long standing nominations to be included on the ACT Heri... View
bj_ACT - 15 hours ago
Why is Morris always calling on the ACT Government to pour funds into areas where he is making millions and millions of dolla... View
News 70