In uncertain times,
we give you certainty.
4 September 2019 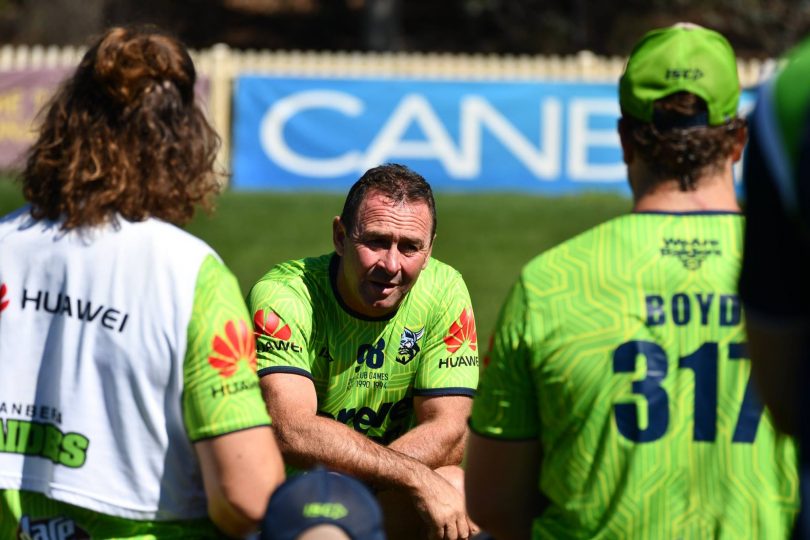 Ricky Stuart and the Raiders team have come a long way since 2014. Photo: Supplied.

When Ricky Stuart signed on as coach of the Canberra Raiders in a three-year deal in 2014, he made it his mission to ensure his players were integrated into the community.

Over the years there had been a feeling of disconnect. Players were doing plenty of school visits and the like but there was a sense they weren’t gaining traction in the community. The fracture started with the Super League split in the 1990s.

But crowd numbers over the last couple of years, and general support for the team, is a sure sign that the reconnect is almost complete.

Of course, making the top four heading into the finals helps, but Canberrans expect more than success to support their teams. The community wants to feel a sense of ownership with the team and the players. They need to feel part of a movement, and not like they are just weekend supporters from March to October.

The Brumbies are proof of that.

In 2013 the Brumbies made the Super Rugby finals. In the process, they secured a home final against the Cheetahs at Canberra Stadium. Admittedly, the Cheetahs were not the biggest drawing side in Canberra, but the Brumbies struggled to get a crowd that night.

But 10 years earlier, the Brumbies were the hottest ticket in town. They would have attracted a crowd in excess of 20,000. What happened in the intervening decade? A disconnect developed between the club and many supporters, with a belief the team lost its sense of community. The profile of the team may have been high in Manuka and Kingston, but less so in Gungahlin and Tuggeranong.

Only in recent years have the Brumbies made significant inroads back into the community, but it’s a long way from the glory days in the early 2000s when the Brumbies were Canberra’s team and the Raiders struggled to buy a crowd.

In fact, it got so bad for the Raiders that management suggested the local media was giving too much coverage to the Brumbies at the expense of the Green Machine. At the time there was a perception the Raiders had become a business in Canberra rather than a team in Canberra. Players boasting about earning six times above the average wage certainly didn’t help things.

How times have changed.

Today, the Raiders are far more visible around the city and involved in charitable causes. No player is seen as being above others and the days of public appearances being a chore appear to be well and truly over. The Ricky Stuart Foundation, set up in 2011 to raise awareness of autism, has certainly helped create a place for coach Ricky Stuart above and beyond football. Players have been involved as well through fundraising and awareness building.

More broadly, the club has built a reputation as being family-friendly, and demand for player appearances at schools, hospitals, charity and other community events is high and growing.

In 2017 the Raiders participated in more than 425 community appearances and donated over $80,000 of club products. But turning up is just the start – it’s what happens when they’re there.