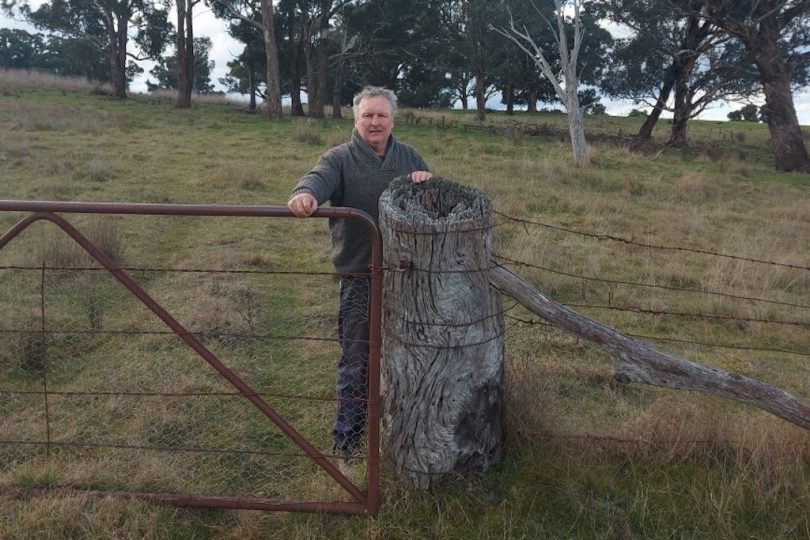 Chris Croker alongside an original surveyor’s peg at ‘Ayrston’ in Golspie. Photo: Supplied.

Big families have spread the success of the Crokers across the Canberra-Goulburn region in wool and cattle breeding, real estate and the building industry. They have provided the NRL with durable rugby league stars, and their communities with generations of civic-minded leaders.

A pivotal part of their history begins from where a stout strainer post stands, one of the original markers for ‘Ayrston’, a grazing property at Golspie, north of Crookwell, Taralga and further north of Goulburn. Cut from a mighty yellow-box tree for a surveyor’s peg as European settlers arrived in the 1830s, the weather-beaten post in the photo above is alongside fifth-generation farmer and family historian Chris Croker.

An ex-convict, Patrick Ryan, first took up the land even though he was not allowed to. He wrote to his nephew in County Tipperary, Ireland – a Catholic, John McKeough – who came out to Australia, worked the land and was well into raising cereal crops, sheep and his family when the seeds were sown for burying religious bigotry across the Golspie district.

That liberating reform happened on the eve of John’s daughter Margaret’s wedding to a local man. Another man, shearer David Croker, who had been quite fond of Margaret, had left the district. He travelled to Kalgoorlie chasing the gold rush and returned to share-farm at Grenfell, west of Young when he heard of Margaret’s pending wedding.

He jumped on his horse and rode for three days to Golspie to tell Margaret she could not go ahead with the wedding because he wanted to marry her.

The wedding was called off, clearing the field for David. But he had to wait a few years before he could claim his bride. The reason? He was Church of England.

Not until he consented to a list of demands the Catholic monsignor had set out in a letter did the wedding go ahead. While David remained Church of England in the mixed marriage, he took his children to mass each Sunday, then attended the Church of England service afterwards. 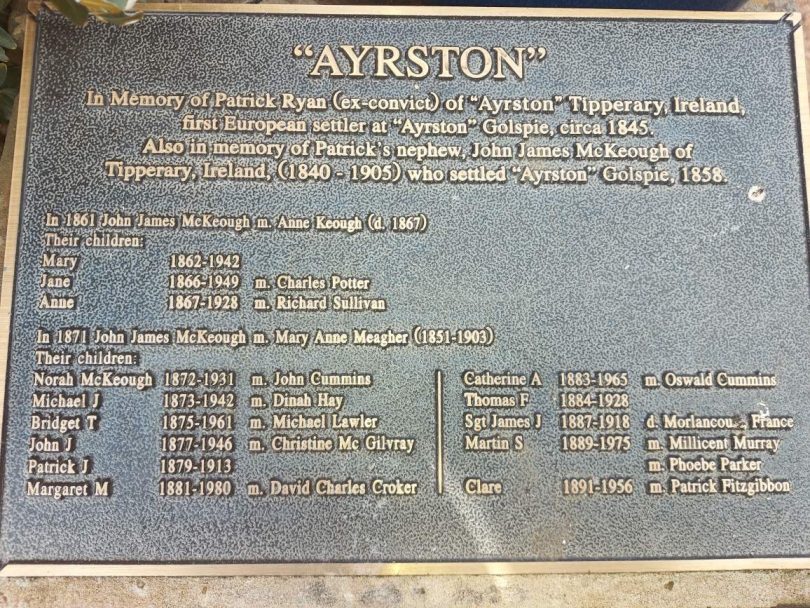 A plaque at ‘Ayrston’ records the first chapter of the McKeough family’s story. Photo: Supplied.

Aged in his late 70s, he changed to Catholicism because he wanted to be buried alongside Margaret when the time arrived in the same section of the cemetery. Still prevalent in most communities, the religious divide faded in Golspie where the communities banded together to build a Catholic Church in 1896, and two years later a Church of England.

David Croker’s grandfather, George, arrived in Australia with two brothers from Piddletrenthide, Dorset, England. They were in the timber industry and went their separate ways in the colonies. George settled at ‘Sunny Slope’, Fullerton, where he raised a family including a son, Nathaniel, David’s father.

Margaret and David had 10 children, one died at four months, one became a spinster, one a nun and between the others there followed many children and 60 grandchildren, including Chris. Many of the offspring continued farming in the district and forming partnerships through marriage and business with other settlers’ descendants.

Two of Chris’s uncles, Russell and Fred, married sisters Fergine and Leslie Cameron. The sisters’ grandfather, Patsy Durack, had come from Ireland during the potato famine, and settled in Goulburn from where he built a farming dynasty stretching far into Australia’s north.

The Duracks’s story is recounted in Mary Durack’s Kings in Grass Castles, the first of her three Australian literary classics. 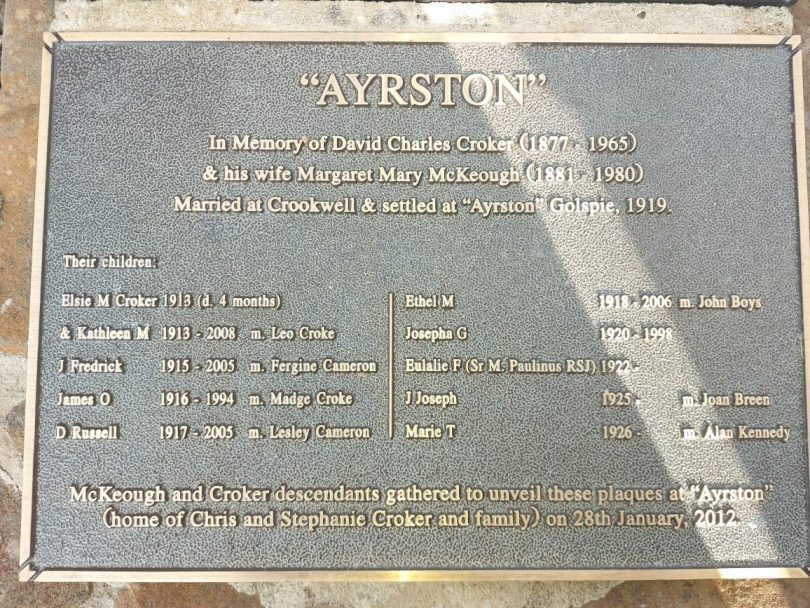 A second plaque at ‘Ayrston’ records the marriage of David Croker and Margaret McKeough. Photo: Supplied.

Russell’s son, Peter, became successful in the cattle industry with Herefords on Bolong Stud, from where he won the ultimate grand champion in the Sydney Royal Easter Show several times.

“Our family has always stayed together,” says Chris. “I was one of six kids. Uncle Fred and Uncle Russell’s children were only 15km up the road and we have always been good friends.

“We had a family reunion in 2012 on the McKeough side and 350 people turned up. It was fantastic; a great day when everyone bought picnics. We went through the history of things.”

Chris says Croker children had grown up amid the harmony of their parents and aunties and uncles getting along with one another, and not holding onto differences but instead enjoying telling their stories to the latest arrivals.

James Croker your clan me thinks.

In reviewing my own family history in 1850s – there was more religious tolerance than later on. In Angaston, SA all of the community built the Cathedral and shared the building for separate services until minister died. In Mansfield VIC , a cemetery had protestants and Catholics buried alongside. My Simcocks ancestors arrived in 1850, and the couple had married in both churches in Ireland. The husband was Protestant and the wife catholic . they raised the boys Protestant and the girls catholic. This continued for a couple of generations. The Protestant boys often married protestants so my line was Protestant.

Paula Simcocks how did you research your family history? Am currently attempting this 🤦‍♀️

Chris O’ryan did some research, lots, , building on others research. Extended family reunions unearthed three keen people had researched Simcocks family. Good to send out messages to who is also doing it amongst ORyans so not repeat self.

Paula Simcocks 👍👍 think I am solo in this endeavour 😬

Interesting about being buried together. My great grandparents are buried together in the middle of the Binda cemetery because one was catholic and the other c of e. In between the 2 different sections

Not to mention Jarrod Croker is closing in on the NRL point scoring record.

Lewis P Owlay people always say to me is that with a c. So these days I spell it for them C R O ,pause a bit then K E R. HEHE.

John Jock Croker so you can spell ? Grandma did say there was some linkage with the Croker and the Crocker ? I never really asked . But im also glad you can spell .

So much energy wasted on bigotry over the decades..