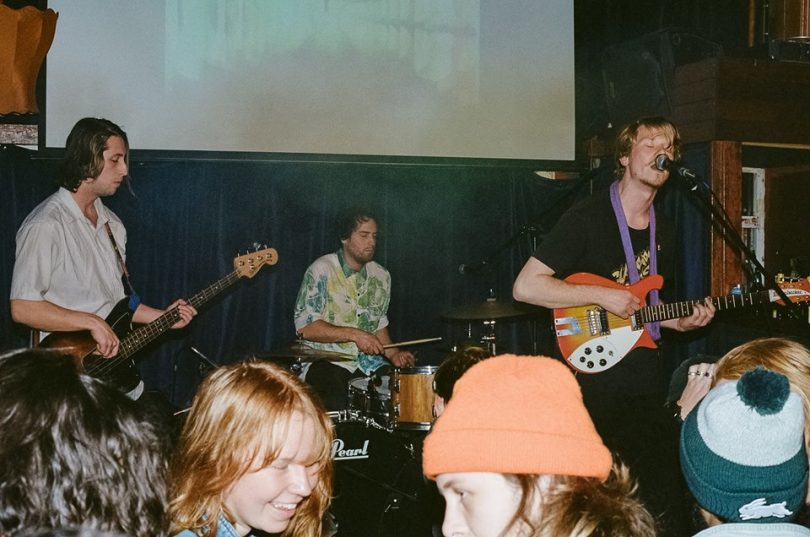 HYG are Canberra’s hardest working psych-rock band. Comprising only three members, Mark Wilson (Vocals/guitar), Oscar Urbas (Bass guitar) and Lucius Culliton (Drums), HYG have been hitting not only the Canberra scene hard, but also various interstate scenes as well. A week without at least one gig HYG are a part of (in Canberra or interstate) is rare and if this does happen the boys are usually playing in their other bands anyway (Slow Dial, Babe Fiasco and formally The Postmasters respectively).

It’s crazy to think they’ve found time to record anything but having released an EP already earlier this year, HYG have come back with a new single. “Colour Box” takes the sound the band established for themselves on their self-titled EP and cranks it up tenfold. While HYG (2018) was a fun record that showcased the band’s style and sound, the EP did little to compare to their live shows that Canberra know and love. “Colour Box” does more to capture HYG’s live sound and ethos.

The track begins with a rolling tom-beat from Culliton that sets the tone for the track: swirling. Wilson quickly joins in with a soft but saturated guitar riff that conjures images of mysterious love in tropical places. The song is mostly instrumental, a brave choice in this day and age that I applaud, and mainly centres around Wilson’s alluring guitar work. Urbas’ bass serves the riff well with restrained root notes in the verses before the explosion of the chorus comes around.

“Colour Box” moves from smooth to violent very quickly as everyone in the band kicks it up a notch. This serves as the chorus and sees Wilson distorting his guitar and playing with more aggression as Urbas’ bass fuzzes out and fills the soundscape with a wobbly uncertainty. Culliton moves from the toms to cymbals and snare but still keeps a swirling flow. A bridge then follows and is the only section to contain lyrics. Wilson falls back on the guitar, just playing a series of jagged, echoing notes with Culliton and Urbas keeping the momentum of the track.

Wilson’s vocals are drenched in reverb and delay as he croons, “I know a place where we can hide/in the shadows.” The mystery of his voice only adds to the allure of the track and content with only singing a few lines, “Colour Box” moves into a final, fuzzed out chorus before ending. The track owes a lot of its feeling to Culliton’s drums. In the beginning he creates the effect of gently swirling around a drain before providing the sensation of a whirlpool later on.

It should also be noted that “Colour Box” is the first effort in production by Zac Gaudie, member of Canberra bands Slow Dial and The Tugs. Gaudie recorded, mixed and mastered the track himself and it is exceptional for a first effort. When listened to with headphones, the guitars and bass can be heard moving around the mix, working with Culliton’s drums to spin the listener around. The only minor criticism I have of the mix is a little more clarity in the drums would not go astray, but then again, the track does not suffer too much for it.

“Colour Box” is exciting for HYG in that it is the first track the band has recorded that captures their live essence. I look forward to seeing where the group goes in the future as I’m sure it will be as bright and colourful as this track.

HYG are supporting The Pretty Littles with Helena Pop at UC Hub on Friday 2nd November. Tickets available at Oztix!