I for one welcome our new capeweed overlords 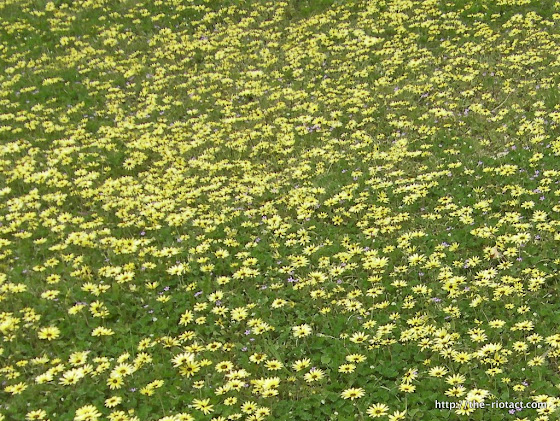 The ABC has a lengthy piece on the pretty daisies brightening our lives this spring.

It turns out they’re dastardly capeweed from South Africa.

I think at this point we’re just going to have to enjoy it.

I’ve got one of these at home for those fleshy lawn invaders:
http://t2.gstatic.com/images?q=tbn:ANd9GcS6Gp_X5fchNinp0a30yurb2Tmr-_3i4DgZu9aiIPC_nWpdM78&t=1&usg=__gN1hnXu-D7HtO_zENVZoVfpYEws=

Not quite a flamethrower, but bloody satisfying nonetheless. It’s death to any weed with enough moisture in its composition, and practically organic too. *grins*

lets get some agent orange up in this motherf*cker

Since they’re illegal immigrants we’ll be jailing, er, I mean processing them, in Nauru, yes?

I would say the horse has already bolted when it comes to eradicating capeweep. Do we really want large scale applications of Herbicide all over the Territory in an effort to control it now? Canberra is one big watershed and the chemicals applied in volumes large enough to have any substancial impact would eventually (and detrimentally) flush into the Murrumbidgee.

Problem is that every key weed is treated the same way. Left as being not significant until such time as it is deemed significant, but alas too far gone to do antyhing about. Imagine if every government problem was dealt with that way?

And to add to the insult, we have TAM’s and the LDA’s preferred method of hydromulching all new earthworks being to spray out the cheapest crap straw they can buy, replete with every weed under the sun. They are literally propogating Patto, Capeweed and every other mongrel weed.

The only problem i have with them is that they attract bee’s and our dog loves to try and catch them which will probably not go well if she does actually get one.

Bees seem to like Capeweed however I reckon it makes them a bit aggressive and the honey is revolting, almost as bad as honey off canola. Have not seen any Paterson’s Curse around this year.

I think they’re pretty. But they get pollen all over shoes when you walk through them.

Capeweed is an amazing beast.

You can mow you lawn one day – deliberately lowering the cutting action, thinking you’ve got them all, only to find that the very next day your lawn is covered with smiling yellow flowers again.

How do they do that?

The only problem i have with them is that they attract bee’s and our dog loves to try and catch them which will probably not go well if she does actually get one.

So what? You’re going to release the dogs? Or the bees? Or the dogs with bees in their mouths and when they bark they shoot bees at you? Do your worst!

I like the idea, Lets mobilise the troops… 50 kids equipped with can of deodorant and a cigarette lighter – It’s not like they’re learning (or more correctly, they’re not being taught) anything in schools these days anyway.

But they’re pretty!
On the other hand, http://img827.imageshack.us/img827/3970/capeweedburn.jpg – do they sell these under “gardening tools” at Magnet Mart?

evil weed that should be destroyed – toxic to my horses.

due to my hayfever, I condone widespread flamethrower induced burn off. Hippies be damned.

Capeweed? Back when we wore onions on our belts we called it Carmody’s Curse.

mark carmody makes me laugh every time. best cross in tv history was to the bonsai display where Virginia said he looked like a giant amongst trees lol

no, mark carmody apparently detests them and wants the nukes deployed – he forbade virginia saying anything nice about them…

Matt Fallon - 49 minutes ago
weekend breakfast Samantha Harding View
Moira Campbell - 4 hours ago
Nicole Fitzgerald this is the place I was telling you about! View
Joanne Trounce - 5 hours ago
Shannon Lee will make sure we do it!🥗🥗 View
News 5

A Hollywood blockbuster starring Liam Neeson will film for nine days in Canberra commencing this Thursday, closing some roads and...
News 22

@The_RiotACT @The_RiotACT
The first Canberra Street Dance Festival is set to celebrate all the elements of hip hop culture including dance, music, art & fashion this Saturday https://t.co/aJNfRCcQBK (27 minutes ago)