ICE CUBE with WC plus KP Records LIVE in Canberra! 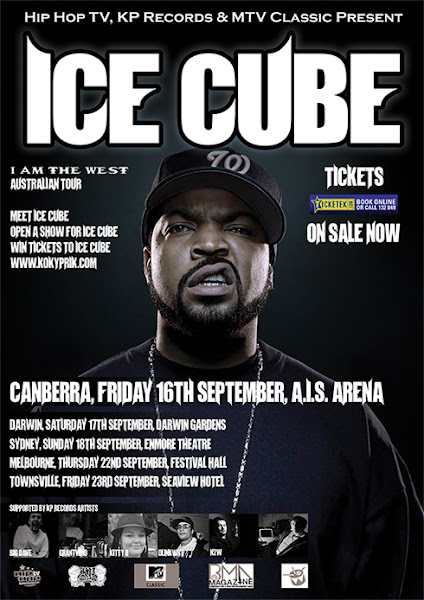 Hip Hop TV, KP Records and MTV Classic are proud to present what could well be the biggest single headline Hip Hop concert Canberra has ever seen!

The man himself Mr Ice Cube will be visiting Australia this spring and he will be kicking off a six show tour with a first time visit to the Nations Capital.

That’s right the N.W.A from the Westside Connection. The MC, the actor, the movie director and the independent business man. The god damn West Coast gangsta rap legend himself live in person at the AIS Arena!

Cube will have fellow Westside Connection member WC by his side and there are unconfirmed rumours that he may bring DJ Crazy Toones and one of his sons along for the ride.

To fill out the roster we have Big Dave, Kitty B, N2W, Grantwho and Dlinkwnt of KP Records hitting the stage for the first time since signing on with Wideawake Death Row and they will have some of Canberra’s finest local Hip Hop acts playing in support.

The dynasty of Ice Cube’s career has spanned over twenty years officially landing him the status of an icon. Just ask B.E.T who handed him the “I Am Hip-Hop” icon award in 2009.

If you need a reminder of Ice Cube’s impact on Hip Hop culture;

There are songs like F*** Tha Police, It Was A Good Day, Really Doe, Bop Gun, Natural Born Killers, We Be Clubbin, You Can Do It, Hello, Go To Church, Gangsta Rap Made Me Do It and list goes on.

Or there are movies like Boyz N The Hood, Higher Learning, The Friday series and Three Kings.

And then there are the collaborations with the likes of Tupac, Dr Dre, Eazy E, Snoop Dogg, Nas, T.I., Lil John, The Game and so many more!

The last KP event was a sell out show so get in early or risk missing out on one hell of a night!

Keep an eye on kokyprik.com for chances to win the opportunity to open a show for Ice Cube, meet Ice Cube and grab double passes in the coming days!

Plus a special feature on the career of Ice Cube all here at kokyprik.com!

Show hosted by Brb and Kodak.

UPDATE: The Show has now been postponed to April 2012.

Hell yeah! I’ll be front and centre on this one.

It’s about time we got a decent act in Canberra!

Terror illustrates my error! Now I can’t hang around Mama ‘casue I scare her!

If there was guaranteed performance of NBK with Dr.Dre, I’d be there front row. Sadly…

Karin Foxwell - 8 hours ago
Frank Valzano hear hear! As an Art Therapist working with veterans with PTSD I can only imagine how that sort of money could... View
David Stephens - 11 hours ago
But if your head is in the sand you might come a nasty gutser. Moving on has its drawbacks. View
Smackbang - 14 hours ago
What a coincidence - your opinion is also irrelevant, and yet here you are offering it. View
News 7