The ABC reports that the widely derided Immigration Bridge proposal has found a site next to the National Archives for an “immigration thing”.

This will save the scheme’s proponents having to return contributors’ money.

Campaign director Andrew Baulch says they have now secured a site on Kings Avenue in Parkes.

“It faces on to Kings Avenue, next door to the National Archives of Australia. So it’s a wonderful site. Sites within the Parliamentary zone are most sort after and we’re very lucky indeed to be able to secure that for this project,” he said.

Mr Baulch says an international design competition is being held to decide what form Immigration Place Australia will take.

“We’ve always wanted with this project to come up with something that people will come from all over the world to see,” he said.

“We don’t know exactly what form things are going to take, but wonderful imagination that will represent in an appropriate way all of the wonderful contributions that migrants have made to Australia from 1788 onwards.”

It is worth noting that on the Immigration Bridge website the declaration of the site is dated 19 December 2010.

It appears construction has to commence before 31 December 2013 if they want to hold onto the site.

The ACT Heritage Register identifies the block as the corner of Kings Avenue and State Circle. Primo real estate. 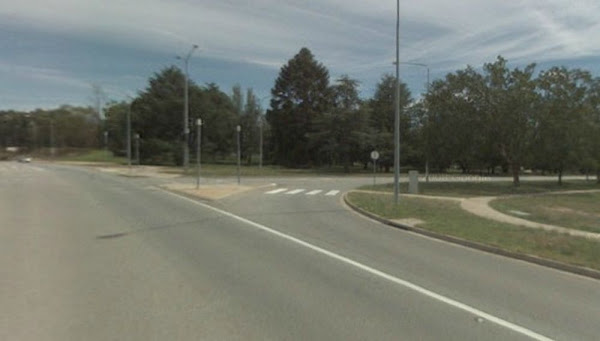 “Sites within the Parliamentary zone are most sort after “

I vote they build an immigration detention centre on the site.

I vote they build an immigration detention centre on the site.

I am the great grandson of an immigrant.

Give me free things!

Looks like a waste of dough to me. Are those ‘immigrants’ who were slung out here in chains to be counted?. And so is it to be a wall thing with plaques on it ? Waste of prime land. Make it usefull, build a tavern on it.

I am the son of a migrant and I don’t understand the need to waste money or prime land on this and I find it hard to understand why there is such a push to get an immigration thingy (it doesn’t seem to matter what it is). Is it so someone gets a pat on the back and feels jolly good that they are an important contributer to Canberra society for organising such an important cultural wank?

Regardless….why does it have to go to an international competition? Don’t we feel we can produce anything worthwhile ourselves, even nationaly?

Oiledpengu - 40 minutes ago
There was a report in the media that the average modern Olympics has a cost blowout of 170%. So you can see why Brisbane was... View
Community 67

Oiledpengu - 50 minutes ago
Walk around Braddon on any week day and more than half the cars have disabled permits. It seems there’s a lot of disabled p... View
Pete Macca - 2 hours ago
Usually there are signs next to these parking areas. Last time i got booked for parking in a loading zone it was $45 fine in... View
Robert Lyon - 3 hours ago
Perry and Don - $615???? I should pay more attention but their excuse is lame! Cheers and stay well! Mary Lou and Bob... View
Opinion 3

cockneyreject - 2 hours ago
I agree. The BMX bike and skateboarding events are the acme as far as I’m concerned. As for swimming …. Yawn. View
Community 162

Stephen Roberts - 3 hours ago
Give him back his dog, bruiser is no threat something very strange must of happened or whoever rang DAS may have an agenda View
Colene Hollingsworth - 18 hours ago
Nada Krstin Thanks, all done. 👍 View
Lifestyle 7

Kylie Wilson - 4 hours ago
Jimmy Wilson so that would have been a dingo you saw a couple of weeks ago!! View
Sean Bishop - 5 hours ago
Yeah had close encounter near Point Hut/Tidbinbilla Road. View
Kerry Buonopane - 6 hours ago
Have seen them a couple of times 🥰 View
Lifestyle 1

Milestone Entertainment - 6 hours ago
Can't help but comment Thyme is kicking goals! Highly skilled, with a phenomenal attitude, Thyme has what it takes to go "all... View
Lifestyle 18

Peter Graves - 15 hours ago
Now there's a name. You almost had to be working in Woden. It was downstairs at the side of the Tower facing the Square. Now... View
Szusza Ihasz - 19 hours ago
Bands i were in played at Mooreheads, Stakeout, Unibar, CCAE refrectory, Cpt Cook hotel. Etc etc Oh the good times of youth! View
Szusza Ihasz - 19 hours ago
There was The Stakeout in East row, upstairs in the early 80's. Live bands twice weekly. Was always a blast. View
Community 3

Grace Nagle - 16 hours ago
These are our orphaned twins… View
Kylie Kara - 17 hours ago
Wally Cupitt told you they can come inside! View
Kathryn Mitchell - 17 hours ago
Peter Dagg I was sure this would be about you! 😁🐑 View
show more show less
*Results are based on activity within last 7 days

@The_RiotACT @The_RiotACT
After battling injury, form and selection issues, Martin Dent changed sports and finally made it to the Olympics. Almost a decade after the London Games, the competitive spirit still burns bright https://t.co/gXyNwmFOCl (45 minutes ago)

@The_RiotACT @The_RiotACT
A Children's Court magistrate has said he cannot understand why society wants him to jail children as young as 11 when it's often the parents who need to be sentenced https://t.co/8RnDJHYmQ2 (3 hours ago)