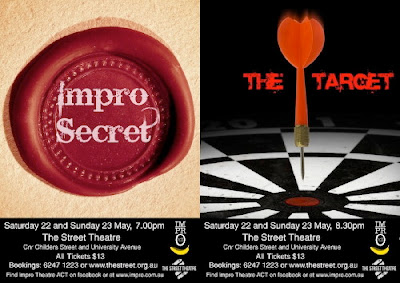 Impro Secret is a classic Theatresports style show (along the lines of Thank God You’re Here or Whose Line Is It Anyway?), completely improvised and set around the theme of secrets.

The Target will be a more open show about goals, objectives and motivation, and will feature a guest improviser from Melbourne, Tim Redmond, along with some of the Impro ACT regulars (who took out second place in the recent Theatresports national championships in Sydney)

For anyone who hasn’t seen Impro Theatre ACT in the five years they’ve been performing in Canberra, the shows are completely made up on stage by the performers, often from audience suggestions. The results can vary from hilarious to touching to disastrous, but are always entertaining.

@the_riotact @The_RiotACT
Ghanaian born and Canberra bred singer @genesisowusu has had a massive past week, claiming two Triple J awards and then scooping four ARIA awards on Wednesday night, including Album of the Year https://t.co/kjMabj6smr (17 minutes ago)