In, out, let’s get crackin’: West Side story comes to Canberra 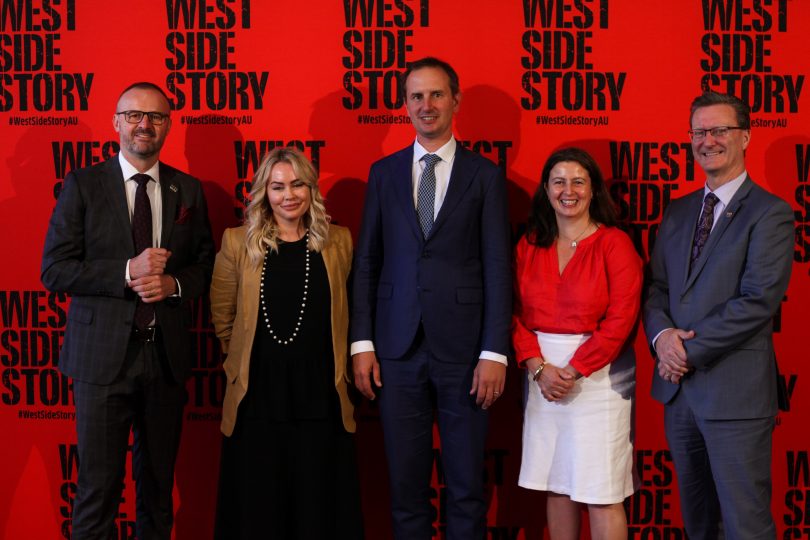 The story of the doomed lovers is perennial, the Bernstein dance beats are irresistible, and so, the Canberra Theatre hopes, is the news that West Side Story is coming to town for a big, thrilling all-star three-week run in October.

Following on from the success of Mamma Mia, this is, without doubt, a big deal. A 20 piece live orchestra will accompany a 33 strong, all-Australian cast for the first fully professional production of West Side Story in Canberra’s history.

It’s a co-production with Opera Australia and GWB Entertainment/ BB Group, both of whom are currently mounting international productions in destinations as diverse as Germany and China. The October timing has been chosen to coincide with Floriade to drive interstate and regional tourism.

The biggest thrill is in the music, of course – Bernstein’s score and the dances are among the most frequently performed classical music in the world. This will be a top-notch production, nurtured by choreography director Joe McKneely who learned from the legendary Jerome Robbins and musical director Donald Chan, whose helmed more than 3000 performances of West Side Story.

The rivalry between the two teenage street gangs of different ethnic backgrounds; the love story between Tony, a former member of the Jets and best friend of the gang’s leader Riff, and Maria, the sister of Bernardo, the leader of the Sharks; the sophisticated music, and extended dance scenes were groundbreaking at the time but have been given a new millennium twist.

Announced today by Chief Minister Andrew Barr, the news is also a firm indication of the government’s belief that arts can be a strong economic driver for the ACT and the surrounding Capital Region.

Behind the scenes, it’s been no easy task persuading major touring companies that Canberra is a worthwhile venue for large shows. Mama Mia attracted almost 33,000 visitors and generated an estimated $4.5 million in economic activity.

Following on from that success, the financial backing from the ACT government for West Side Story totals a $100,000 investment from the major events fund and Mr Barr said that major events continue to be a key tourism policy driver.

Speaking to Region Media, the chief minister said “The challenges the arts face collectively has been convincing the bean counters in Treasury and Tourism of their economic value. The social and cultural value is well established but the arts have not attracted as much commercial sponsorship and government support in the past because the economic case has not been argued well enough.”

“We have to make that case not only to funding bodies and the business community but also to the broader general public, who may or may not be regular arts attendees. That means striking a balance between commercial success and popularity but also furthering our cultural reputation.”

“Canberra’s direction in the longer term has to be in nurturing our creative industries. I was very taken by Russell Howcroft’s speech at the National Press Club about how concerned we are with productivity, but could bring the same focus to creativity. He suggested we need a creativity commission that looks at economic, social and cultural benefits and uses these kinds of opportunities to enhance our city’s reputation.”

Mr Barr says a belief in the firm economic value is behind the government’s decision to prioritise the Canberra Theatre development ahead of a new stadium or convention centre although that’s been controversial in some quarters. “We have ageing theatre infrastructure that doesn’t give us as much creative content as we could have. We’ve done very well on the sporting stage and we’ve been able to attract major events by progressively investing in facilities.

“We need to find a way to build everything we need in the next decade and find the correct ways to finance them. But governments need to choose what comes first and my assessment is that of our existing facilities, the Theatre has the greatest need and brings the greatest opportunity for Canberra.”

West Side Story begins a three week run at the Canberra Theatre on October 10. Tickets on sale to the public on Monday, February 18 from 9 am. Bookings on 6275 2700 or www.canberratheatrecentre.com.au

Wonderful news. This will be outstanding!

Gavin Bradley - 27 minutes ago
Mary-Ellen Bradley not us this is only ACT gov View
Kerry Apted - 5 hours ago
excellent! View
Samantha Freeman - 7 hours ago
Tell that to the Federal Govt. No one has moved to a hybrid model, only state Govt View
Opinion 16

Sofia Zivkovic - 33 minutes ago
No point, comp is getting worse each year. View
Tim Mitchell - 8 hours ago
The joint A-Leagues men and women trophy really strengthens Canberra's bid. Would be strange having Canberra as the only team... View
Community 142

kenbehrens - 3 hours ago
A few years ago when we were visiting our son in Sydney, there were blankets and items of clothing under shelter on the stree... View
jwinston - 4 hours ago
harcm said “tim_c – what a load of rubbish you talk. What if your schooling was completely disrupted by domestic violence... View
Acton - 4 hours ago
The money you are giving out of misplaced guilt to a street beggar is just funding their drug, smokes and/or booze addiction.... View
News 1