Is the Porsche Taycan the electric vehicle for petrolheads, or plain sacrilege? 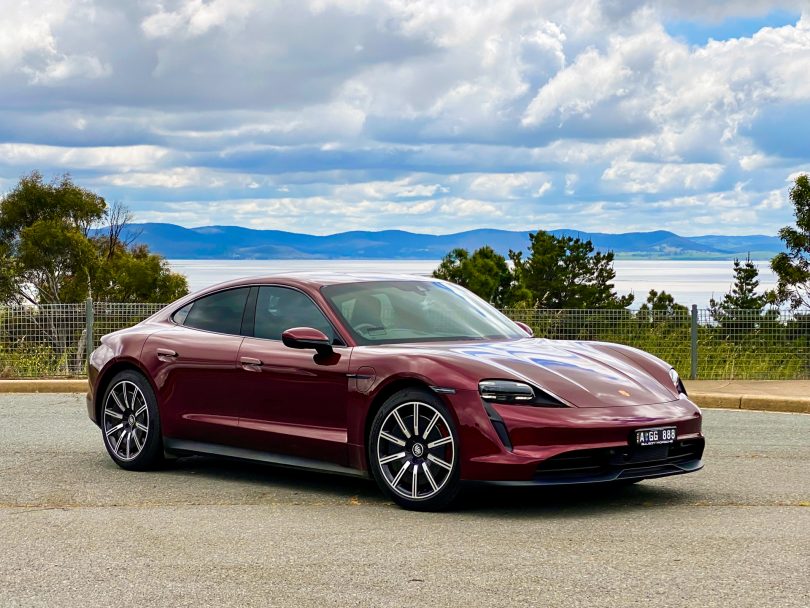 The very handsome Porsche Taycan, with some windmills in the distance. Photo: James Coleman.

“Well, it looks like EVs are still only alright for some,” is the number-one comment that comes my way after clambering out of the electric Porsche Taycan.

The thing is, though, once you get into the upper echelons of the market where this $225,000 machine lives, money doesn’t matter anymore. Instantly then, half the electric-vehicle battle is won.

To put this into perspective, the four-door, fully-electric Taycan super sedan arrived here in March and accounts for half of all Porsche cars sold in Australia. The other more plebeian manufacturers struggle to reach more than one per cent penetration rate with their EVs.

The only real battle, then, is to be waged with the Porsche purists, the ones in the branded jackets who have only just recovered from having the cooling system in the 911 flagship changed from air to water.

Here the new Taycan is, ripping out the beating internal-combustion heart altogether. 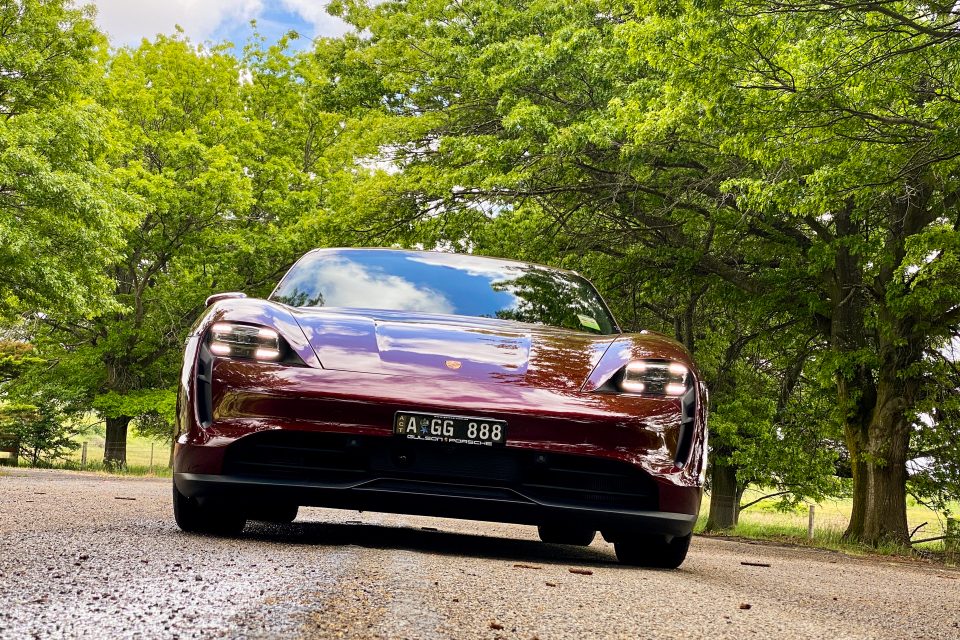 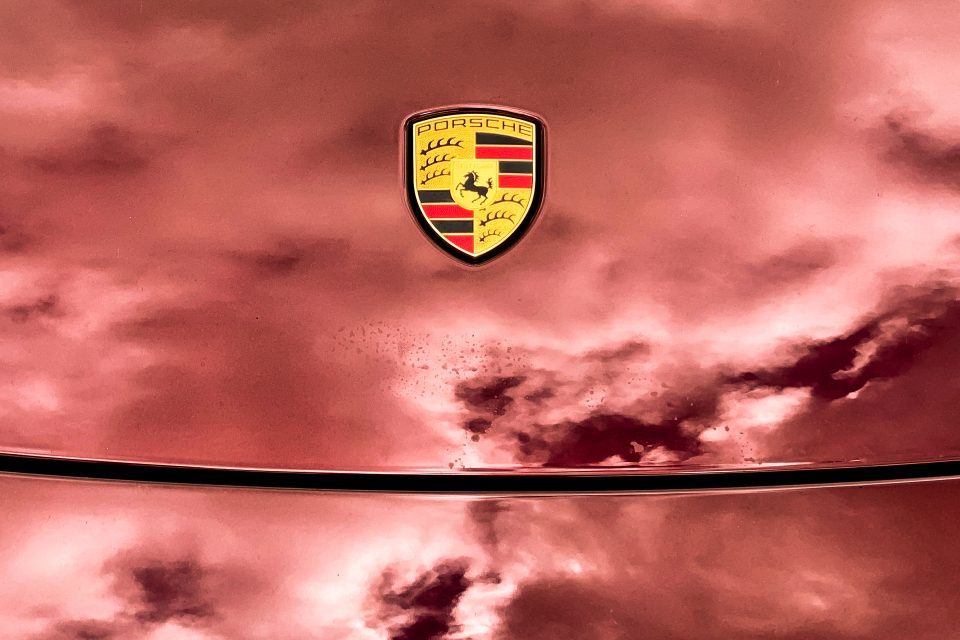 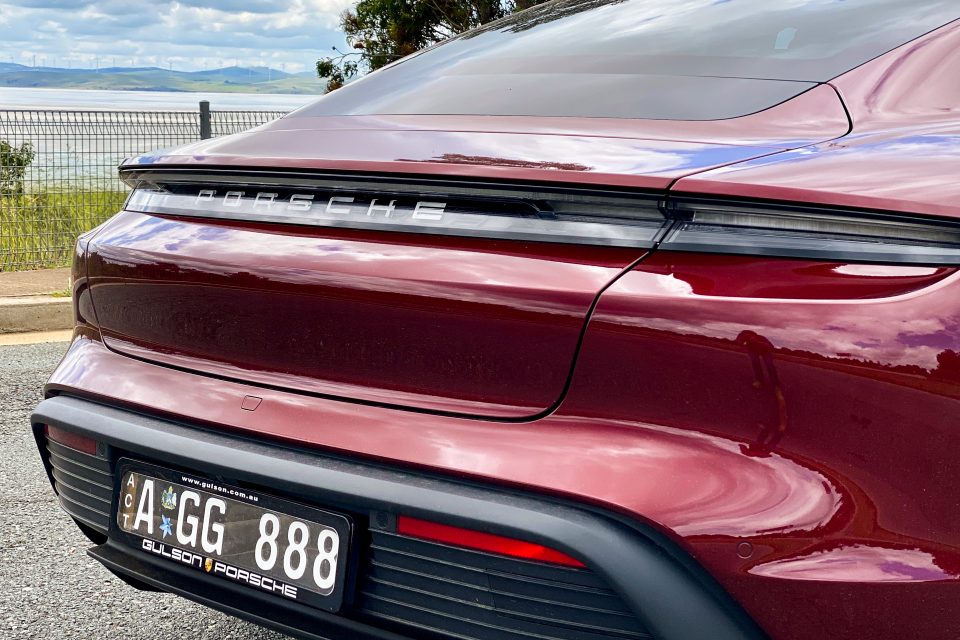 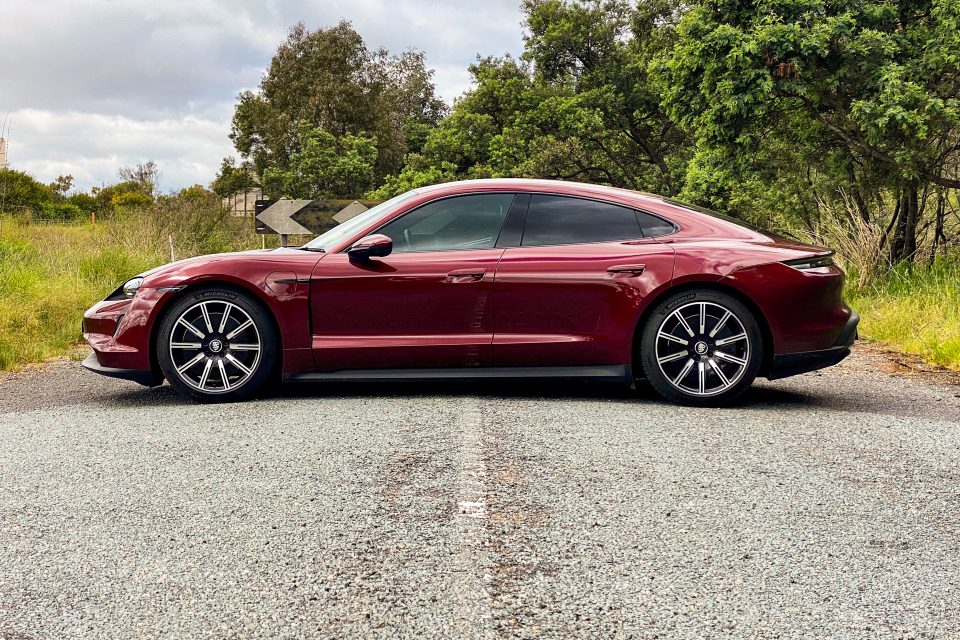 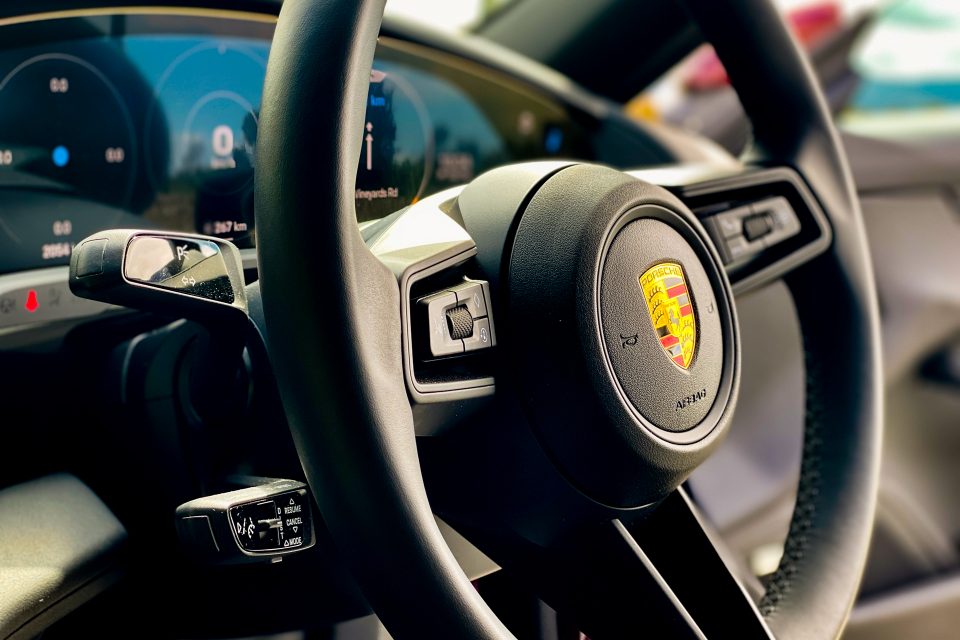 This had to be done with great care, and fortunately, the Taycan reeks of great care.

This leaves electric cars with the personality of an appliance, like a kettle, and as we know, all kettles are broadly the same, except for those glass ones with the LED lights, which are obviously a cut above.

Anyway, the good news here is that the Taycan feels every bit like it’s designed with these enthusiasts in mind from the outset. Put earplugs in and you could be in the driving seat of a 911, albeit one that offers five seats, two boots, raiseable ride height and supreme comfort on the Federal Highway.

For instance, the regenerative braking system in many other EVs strikes the moment you take your foot off the accelerator – often quite savagely – whereas the Porsche’s is more natural.

Other EVs also make do with just one gear, and most can’t exceed 200 km/h, so the Taycan scores an extra one. Pop it into ‘D’ with the lever on the dash, and it will even roll a little when you take your foot off the pedal.

The acceleration isn’t quite as seamless as you might expect from electricity, starting with a bit of a jerk as the two-speed rear transmission sorts itself out. Tapping the virtual ‘Sport’ button on the centre console screen, however, makes it smooth. Besides, you’re not thinking about this sort of minor quibble for long because the view from the windscreen will have just narrowed into a very tight tunnel. 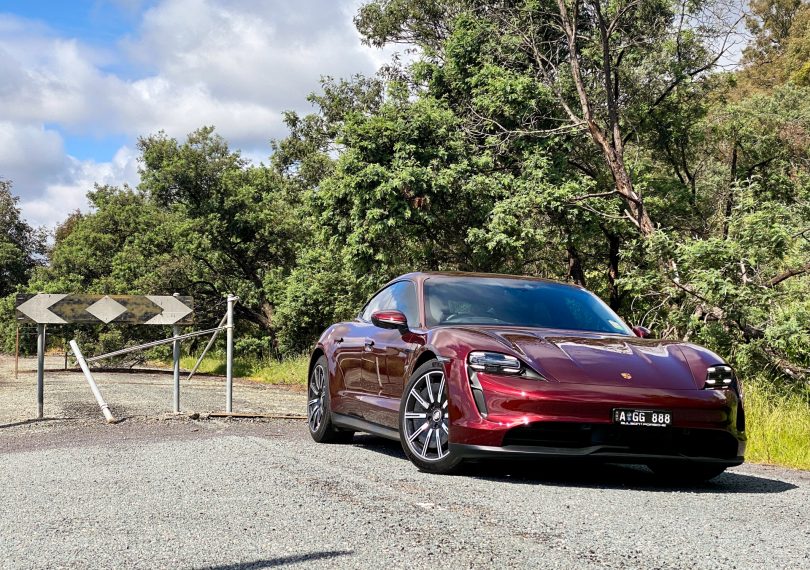 The trouble with cars like the Taycan is that you’re well within the realms of licence loss, prison, and possibly even death whenever you look down at the speedo. This is an immensely capable car and urban limits are a muzzle, although the sheer urgency of its get-up and go made my wife feel ill and the 4S model isn’t even the fastest. The Taycan Turbo boasts a 0-100 km/h time of 2.8 seconds – more than a second faster than the 4S.

On the plus side, you can drive like a rich hoon while being instantly forgiven the moment other drivers notice the lack of exhaust pipes. EVs cover a multitude of sins.

Either way, it’s hilariously fun and addictive, but the Taycan isn’t just a one-trick pony. The other thing about electric cars is the very low centre of gravity, and yes, it’s a cliché, but the Taycan genuinely handles like a go-kart. High praise for a vehicle that weighs more than two tonnes. 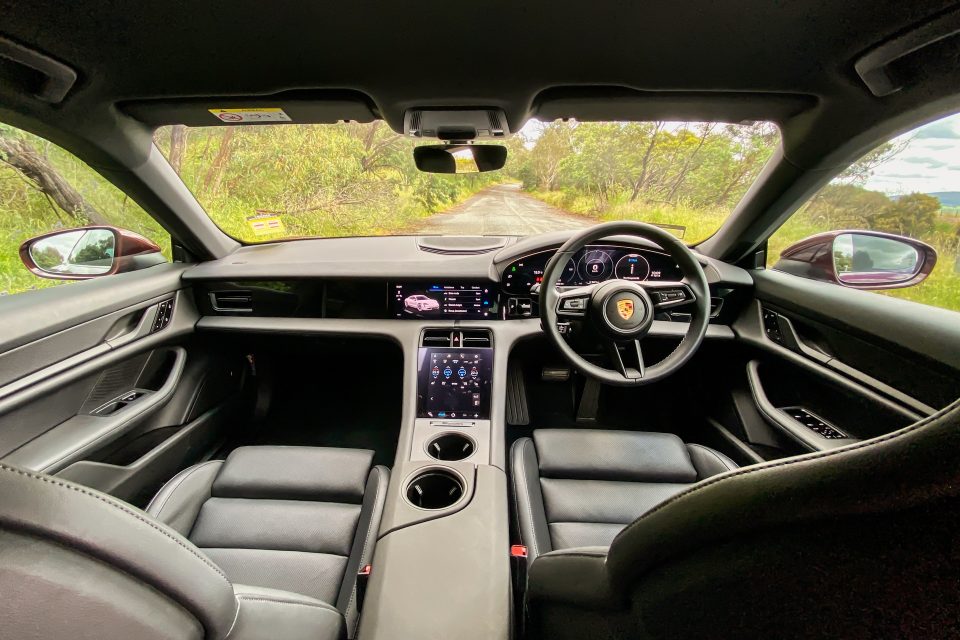 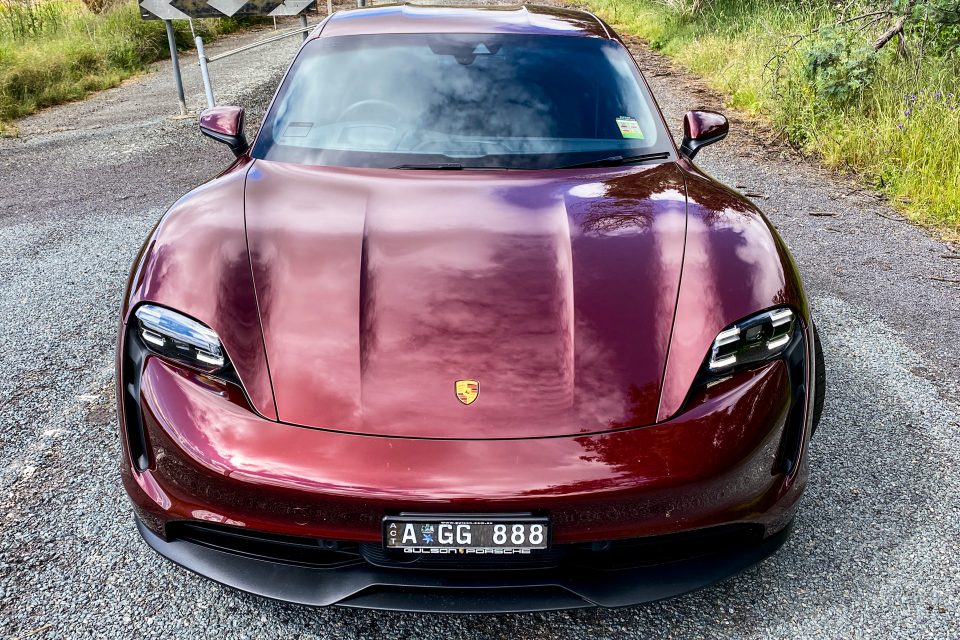 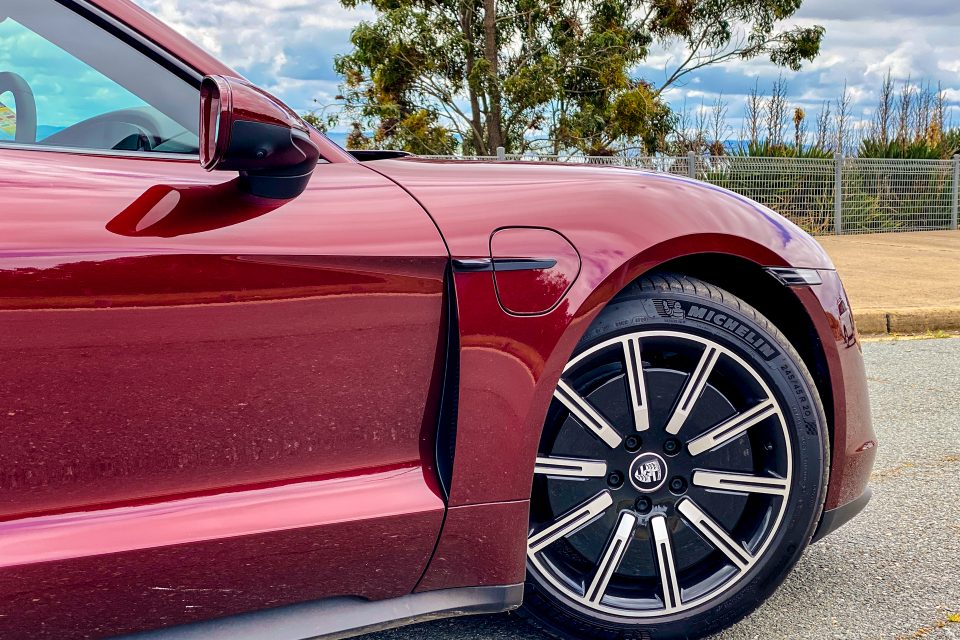 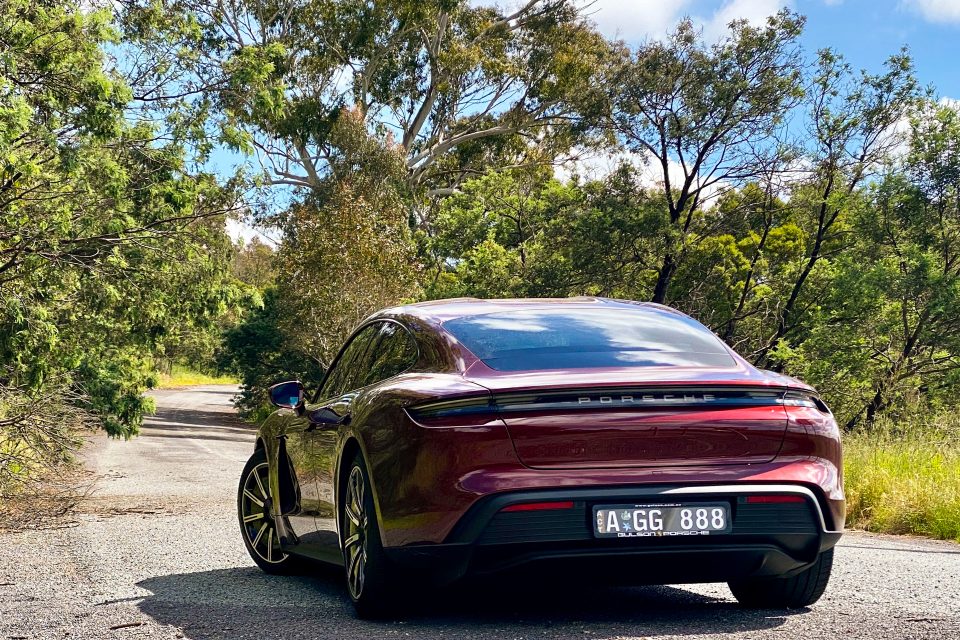 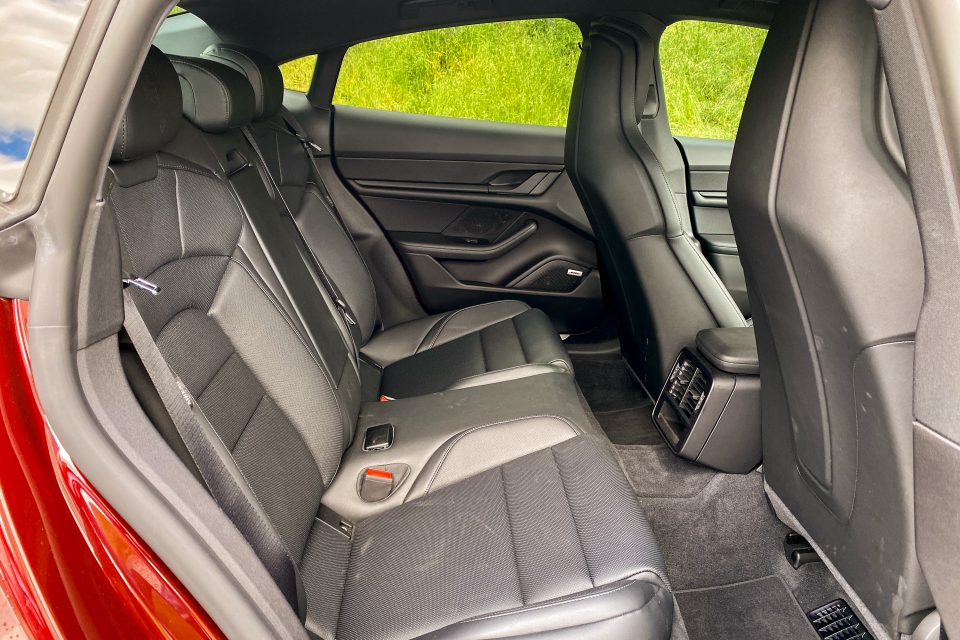 It isn’t completely silent either. There is a bass-y hum to the throttle followed by a whirring noise when you slow down. Many of us might have come to love the loudness and brashness of internal combustion, but there is something a bit cool about this too.

All that said, it is a bit like trying to maintain a conversation with that really quiet person in the corner of the room. He’s nice and polite enough, but something is missing.

This is where Porsche might have another trick up its sleeve for the purists in the form of synthetic fuel.

Porsche is currently producing this at a plant in Chile where wind-generated electricity is put to work splitting water into hydrogen and oxygen. The hydrogen is then combined with carbon dioxide from the atmosphere to produce methanol, which burns.

The technology is still resigned to the testing stage in motorsport, but Porsche vice-president of GT Cars and Motorsport Dr Frank Walliser announced to the world in February that cars powered by synthetic fuel could have lower overall emissions than EVs, once emissions from manufacturing are factored in. 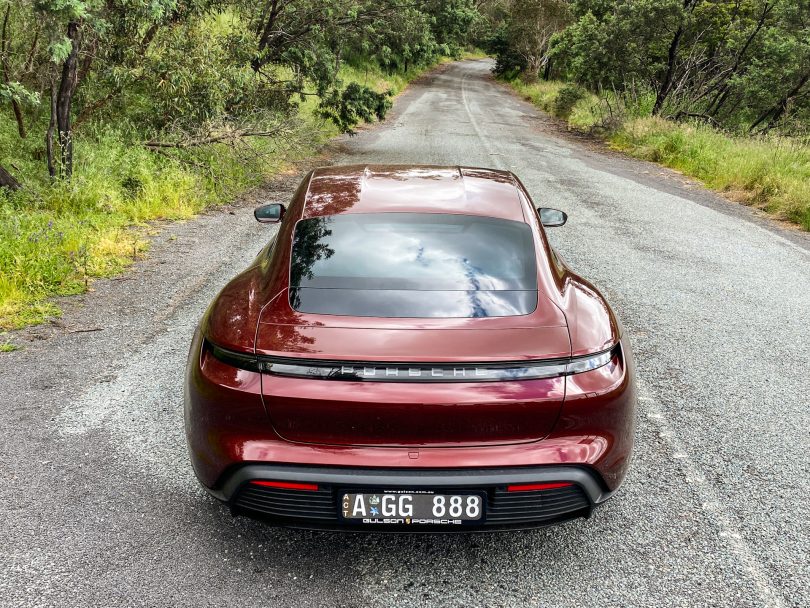 Roads don’t last long when you put your foot down. Photo: James Coleman.

The 2022 Ford F-150 Lightning (extended range model) has 420kw and 1050Nm of torque. It can operate your tools on the worksite and if brought to Australia, the right-hand conversion would price it at little over half the price of the Porsche. The there’s the Rivian. If you have Apple TV+, watch the documentary, The Long Way Up. If you’re going to go EV, at least get something practical, not a toy for the rich

I for one am getting quite tired of the relentless promotion of EVs on this site.
? They are expensive.
The promoters do not take into account the very high probability that many of their ACT audience, may already OWN a vehicle, and could not afford to buy an EV, even with that vehicle as a deposit.
Further?1 They do not take into account the possibility / probability that ‘the same / many ACT’ folks may have already taken action to reduce their carbon footprint.
Indeed we to started on that in 1981, when we bought our first house because it had real low-energy use potential. We brought up two boys in it and will keep it until we can’t stay in it.
It could be a good idea to take account of what people may already have done. Indeed a collated listing of such actions / choices could be a good idea.

The sample size of people who have taken effective action should not be onerous for this site!

It could also be effective in showing people that such action does not have to be expensive and that it can save you money, as well as help sustain this huge circular home of ours.

James, are any of the BEV companies going to setup up a display in Summernats, to show their wares? 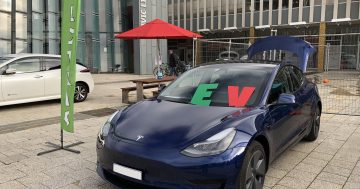 Electric vehicle registrations in the ACT surge past 1000 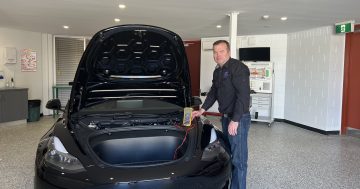