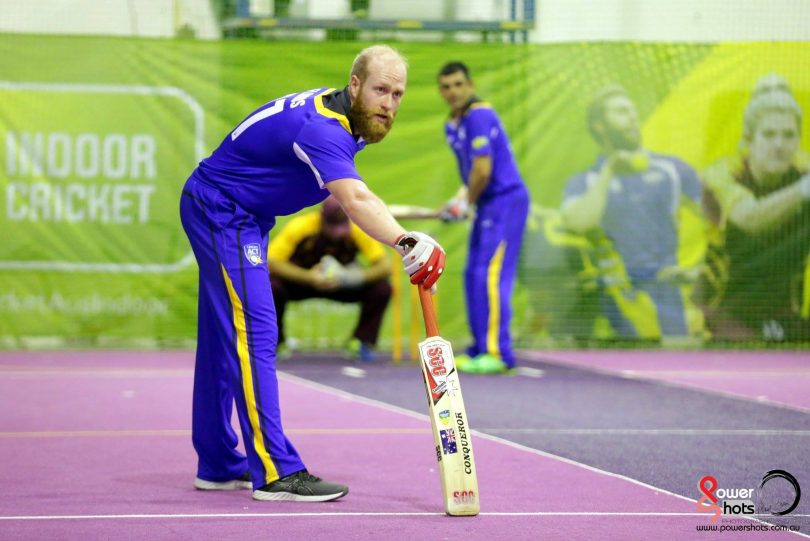 The Sporting Capital is a sports series by Lachlan Roberts, who has conversations with Canberra’s sports stars. For the seventh part of the series, Lachlan chatted with Tim Floros, who capped off a stellar indoor and outdoor season, winning the top ACT awards for indoor and outdoor cricket.

Tim shared with Lachlan why he had an incredible season opening the batting for Tuggeranong Valley, his backyard cricket battles with his brothers and why he wasn’t at the awards ceremony on Wednesday night.

“I missed out on the big night on Wednesday because I was up in Brisbane watching Ed Sheeran. I was just too late to change my plane tickets around, which is a shame. Ed Sheeran was great though.

“I tied first in first grade player of the year in outdoor cricket with Tom Engelbrecht and for indoor cricket, I won the Floros Medal for ACT Rockets Player of the Year. The Floros name does get around a fair bit and we do try to keep the medal in the family. The medal was named after my uncle Billy Floros, who has coached and played for the Rockets for many years. He is also the assistant coach of the Australian indoor cricket side and also played for Australia. He has been a big part of ACT Cricket for many years. The Floros medal was brought in in 2012 and since then I have won it three times and my brother Matt has won it once.

“The Floros Medal is a very special award because there are so many players that are worthy of this award and to pick it up for the third time is pretty special.

“My brother Matt was named Men’s International Player of the Year so he took that title off me after I won it the previous year. So he has the bragging rights at this stage I think. I’ll let him think that anyway.

“I do love my indoor and I am very passionate about it and I work really hard to get better and better. I do like playing outdoor but I play it for the social side of things and I try to enjoy it and play with my mates. I would like to go to the next level but there is a lot of hard work and effort to go to the next level. I focus a lot more on indoor cricket.

“In July, we go away to defend our national title and if things go well from there, I might make the Australian side. There will be an international tour in October over in Sri Lanka to play some of the subcontinent teams. I had a pretty good year last year at the World Cup and if I have a good tournament at the National title, I am pretty confident that I will be selected for that side.”

Backyard Cricket with the Family

“Our family is pretty big in the cricket world of Canberra. My mum and dad used to play cricket and my uncle Billy still plays outdoor cricket for Tuggeranong. My three brothers and I have grown up playing cricket our whole lives and my dad still owns an indoor cricket centre. Ever since we could hold a cricket bat, we have been in the nets every day, hitting balls and playing around.

“There is a bit of competition in backyard cricket in the family and we still play now and Christmas Day is when it gets really messy. We have a lot of fun playing backyard cricket and we get into it a lot. Most families will have a hit and giggle but we get pretty intense in the backyard. There are bats and balls flying everywhere and countless broken windows. People are bowling as fast as they can off five steps and trying to hurt each other. That kind of competition in the backyard kind of reflects on our outdoor and indoor cricket and how competitive we are and how the family excels in the sport.

“It is the same kind of thing at the indoor centre growing up. It starts out as a hit and giggle and then next thing you know it gets competitive and we hurt each other and it gets crazy. I think I do initiate the competitiveness a fair bit and then I watch my brothers go at it. 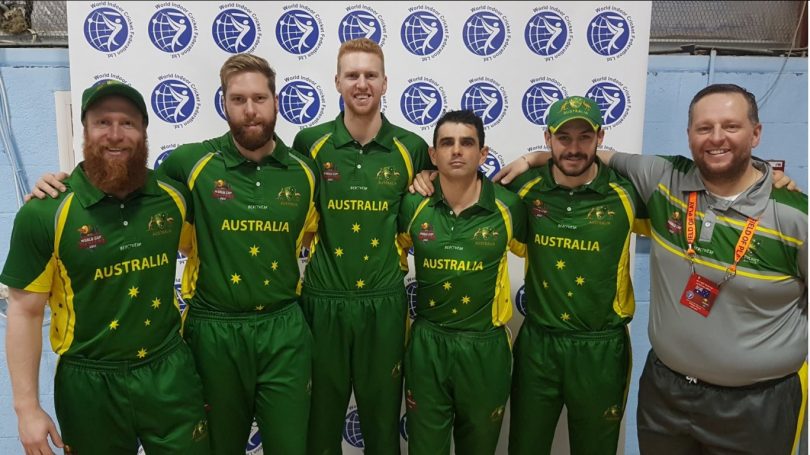 “I think I might be the first person to win both awards in the one season. I had a pretty good indoor season last year and a lot of my indoor skills transferred into outdoor. I didn’t have much of a break between the two seasons and I think it kind of showed the similarities between indoor and outdoor cricket. After all, they are both cricket and the concept is very similar. The indoor season runs mainly during winter around March to October and then the outdoor cricket kicks off soon after that.

“I have been working hard the past 12 months and having a good season last year gave me a bit more confidence and belief in myself and I reaped the rewards the past couple of months.

“My most memorable moment of the past season is a tough one. There are a fair few. We won the national title last year with the ACT Rockets and that was pretty incredible winning it for the second time. We also went away and won the World Cup in October and that was special. But one moment which people probably wouldn’t think was my first grade hundred in outdoor cricket this season.

“It was my second proper season of first grade and to be able to score a hundred and to win the DB Robin Medal gives me a bit more confidence in myself and to put amongst the names of the guys that have won the medal before is pretty special. It is something that I will remember for a long time and something that I will hold by my heart.”

chewy14 - 55 minutes ago
Jorie, Why would I imagine such a thing when it isn't close to reality? As I've said above, the vast majority of people aren'... View
jorie1 - 2 hours ago
Assume there are 300 rental properties in Canberra. And 3000 people looking for a rental property in Canberra (these Canberra... View
Ophellia Knobbs - 2 hours ago
Banning short term/Airbnb in certain areas like Civic & surrounding suburbs would. View
Lifestyle 1

protea - 58 minutes ago
Sadly, the machinery shed can be one of the most dangerous parts of the farm - apart from the dam. View
Sport 17

Finagen_Freeman - 59 minutes ago
If we have to pay at the Hospitals then we sure as hell should pay at a sporting / recreational venue. Oh, we don’t pay at... View
purplevh - 1 hour ago
Being a place that helps maintain a level of fitness in its users it's cost is most likely offset by the health benefits and... View
purplevh - 1 hour ago
Paid parking out there? Can't the ACT government come up with better ways to raise revenue other than constantly slugging the... View
Opinion 267

Alan Vogt - 1 hour ago
Rego for cyclists is a furphy. The link below shows the top five reasons. The vast majority of cyclists already pay rego (the... View
Valerie Merritt - 1 hour ago
Alan Vogt we still pay fees for cars on roads, cyclists should at least be registered and pay something towards the network o... View
News 1

With the ACT Government's revenue from traffic infringements predicted to more than double this financial year, a standing committee has...
Best of Canberra 48

Cutting and styling men's hair might seem simple. But the reality is that a skilled barber has thousands of hours...
Best of Canberra 40

@the_riotact @The_RiotACT
#International air #travel will look very different when Australia’s #borders fully re-open after the pandemic-induced downturn. Here's what the future could look like https://t.co/BwWOBDRVJY (1 hour ago)

@the_riotact @The_RiotACT
The ACT has recorded 24 new #COVID cases - the same as yesterday. Earlier this morning, Federal Health Minister Greg Hunt announced that 70 per cent of the eligible Australian population was fully #vaccinated https://t.co/6nHVps2YUs (3 hours ago)