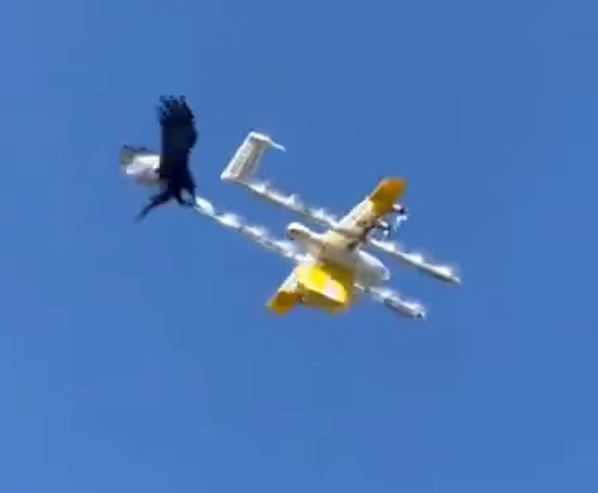 Wing delivery drone being attacked by a raven. Photo: Screenshot.

If dealing with everything currently going on at ground level isn’t enough, footage of what appears to be a raven attacking a drone in the skies above Gungahlin has emerged in recent days.It’s being reported the drone in question was carrying a Gungahlin resident’s morning coffee for delivery during COVID-19 lockdown when it was spotted by a territorial raven who wasn’t too happy with a mechanical newcomer on its turf.

In the video, you can see the raven going in repeatedly to peck at the white drone, although it’s not in any way interested in what the drone is carrying.

The video, which has been posted online and shared on a page called SkyStock, has racked up thousands of views.

The incident, and other similar ones, led to Wing – the company that operates the drones in Canberra’s north – having to temporarily stop operating in some streets in the suburb of Harrison.

A spokesperson for Wing said some birds demonstrating territorial behaviour have been identified in the area and that the advice of ornithological experts is being sought to further investigate exactly what is going on.

“We are committed to being strong stewards of the environment and we have, and continue to, take advice from local ornithological experts,” said the spokesperson. 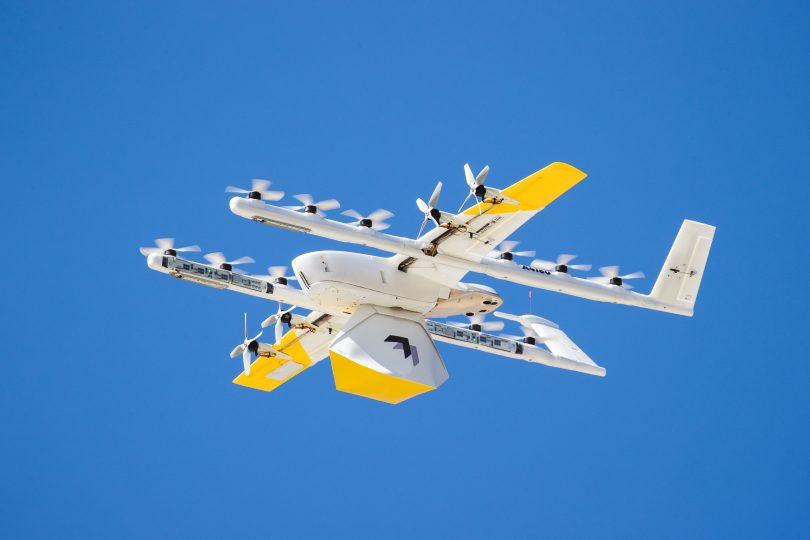 One of these quiet Wing delivery drones has been attacked by a territorial bird while in flight in the Gungahlin suburb of Harrison. Photo: Wing.

However, the spokesperson said that while it’s common for bird species to demonstrate this territorial behaviour and swoop at moving objects, of the tens of thousands of deliveries conducted by the company, “instances of direct contact with birds has been extremely rare“.

“In the unlikely event that a bird makes direct contact with our drone, we have multiple levels of redundancy built into our operations to ensure we can continue to fly safely,” said the spokesperson.

“Consistent with those procedures, the drone completes its delivery safely, including delivery of food and drink that remains untouched in our delivery package and then returns to our facility.

READ ALSO: Lakespeare secures teacher of the stars to direct ‘As You Like It’

“To our knowledge, no birds have been injured during the swooping instances, and anecdotally we’ve heard from some customers that they’ve seen the ravens swooping at a range of objects in the area, including cyclists, pedestrians, cars and garbage trucks.”

While Wing’s operations are currently paused for some customers in Harrison, the company will continue to serve the thousands of Canberrans who use its drone delivery service.

Drone delivery has proved more popular than ever during this current COVID-19 lockdown, with Wing having made more than 10,000 deliveries in Canberra since the lockdown began in August 2021.

Wing has been operating in the ACT since 2019 and can deliver a range of items including food, coffee, medicine, hardware and office supplies.

Since the COVID-19 lockdown began, the company has boosted its delivery service model from five to seven days a week.

More power to the Raven I say! Who needs drone “deliveries”

Glynis Barnett this is the story i was talking about today

I wonder when the birds will figure out the drone has food!!!

Birds are much more important than delivery drones. So. Much. More

Michaela Gillard this is the drone delivery I was telling you about!

Now for the wind turbines.

you’d think with all their planning did territorial birds not factor in.

Dean Okeeffe anyone who’s ever used drones even recreationally knows birds go for them too, there are hundreds of videos on YouTube

Google Project Wing seem consistently slow to admit their issues with their drones.

They consistently said the Bonython drones weren’t noisy at all, and then they came out later and said the Gunghalin V2 drones were much quieter than the noisy first version.

They currently deny any birds have been injured, but a guy on radio the other day said he saw feathers flying everywhere from a bird drone interaction.

My guess is Google won’t admit injuring birds until it’s caught on camera.

Only if the birds wear hi-vis jackets and hard hats and are members of a trade union.

Can we train the birds to attack the work cover drones? .. 😏😉

I am on the bird’s side!

Yes, birds as interceptor fighters, and killer dolphins instead of subs.

We need to breed squadrons of these birds 🦅

Well we can rest assured that if the robot uprising happens birds will be the first to go.

Charmaine Whyte 😂😂 something to keep an eye out for

Kaila Brown are you a drone

Drones are noisy and intrusive – I’m on the birds’ side. Can we train ravens to attack the things? I agree: “Death to all drones!”

Once they discover there is food to be had, watch out!

Rooster James a magpie took a chunk of skin off my face the other day, on a bike ride – violent bastards!

Mark Powell I don’t condone violence against people but drone, on the other hand. Lol

Rooster James agree. I hope they don’t make the birds the problem and try to relocate for the sake of food delivery.

Rooster James why does anyone need to have coffee delivered? Fetch it yourself or uy a coffee machine

Yep , full marks to the Raven.

What I would like to know is what would you pay for a coffee to be delivered by this drone mob. Has to be expensive.

I believe its free. Like the other delivery services the price of your product is determined by the shop/restaurant.. but in regards to the delivery I understand its free.

The next step is to equip the ravens with lasers.

Death to all drones!