Its Me Dayne I’m Back Again 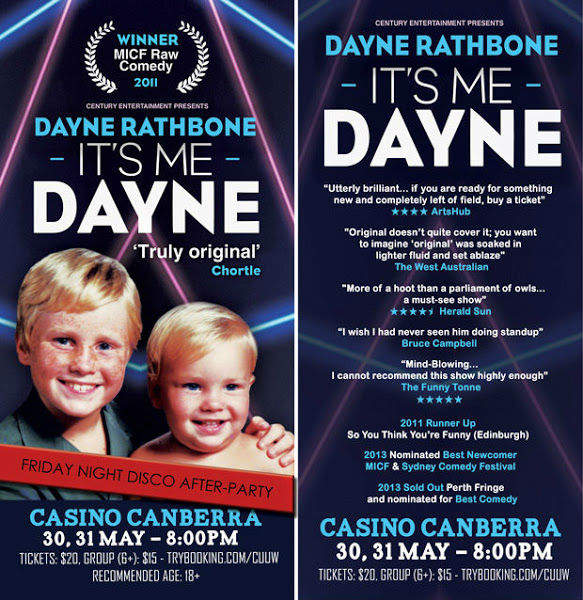 Since starting his comedy career in Canberra in 2010, hilariously-awkward comedian Dayne Rathbone has gone on to national and international success. In 2011 he took out Australia’s biggest comedy competition, Raw Comedy, followed by second place in So You Think You’re Funny at the Edinburgh Fringe Festival.

Last year he supported Anthony Jeselnik (USA) on his debut Australian Tour, and 2013 has already seen him nominated for a multitude of awards, including Best Newcomer at the Melbourne and Sydney Comedy Festivals, and Best Comedy at Perth Fringe.

Now, Dayne will perform his absurdly funny solo stand-up show, ‘It’s Me Dayne’ back where it all started, in Canberra!

EJ Fallon - 6 minutes ago
oh you mean that the tenants should be able to stay there in the upgraded units paid for by the taxpayer? View
EJ Fallon - 16 minutes ago
Robert Knight - Canberra Progressives for Murrumbidgee does that ever not happen? View
Michael Drew - 41 minutes ago
Vickie Quinn eventually?!!? Hasn’t the total amount of public housing gone down in recent years. Does Labour care?... View
News 29

Souhair Naoum - 12 minutes ago
Margaret Dudley love the idea and it can be done from home 👍... View
Emma Davis - 3 hours ago
And you are 100% correct! View
Heather Rattenbury - 6 hours ago
Put the call out... there are probably 100’s of people out there that could help with this View
News 20

Penelope Pollard - 45 minutes ago
I have beautiful handmade ones that were lovingly made by my mum and sister in lockdown in Melbourne..get sewing people! View
Kate Goldsby - 2 hours ago
Wendy yeah I won’t bother making them I’d just pay someone, but yes, I need to get some For everyone View
Ãine Ní Tighearnaigh - 4 hours ago
Better to be proactive and wear a mask to reduce the risk. Many people just don't observe the Physical Distancing requirement... View
News 20

Ray Young - 59 minutes ago
I remember that... it rocked us all... View
Gabriel Spacca - 2 hours ago
I’m shocked. Shocked I tell you.* *May not contain actual shockedness.... View
Russell Nankervis - 2 hours ago
I lived in Bathurst at the time but came for tertiary open day in 2010. Had to drive up the round a bout in Mitchel to get ar... View
News 26

Bill Gemmell - 60 minutes ago
I will certainly look at it but am worried this proposal will lead to price inflation from suppliers and installers. View
Robyne Mitchell - 1 hour ago
Clinton Berry yes they can better preparation of road base in the first place View
Jack Hearps - 1 hour ago
David Jackson and 'muppets' show is copyright by ScoMoses for the LP ... remember Turnbull debacle when looney religious zeal... View
News 5