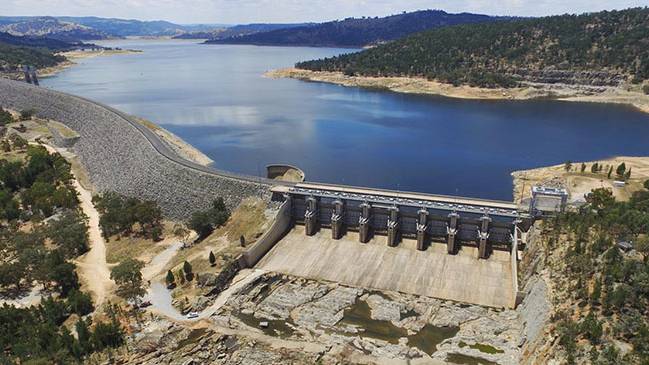 Wall raising work at Wyangala Dam is set to begin this year despite a lack of planning approval. Photo: Supplied by WaterNSW.

Preliminary work is scheduled to begin this year on the $650 million wall raising at Wyangala Dam, in the NSW South West Slopes, without planning approvals and during a parliamentary inquiry that could delay the project.

Reflections Holiday Park, on the dam’s edge, will be relocated in preparation for when the water rises, affecting dozens of cabin and site owners. The holiday park will act as a construction camp for workers when work on the wall begins.

However, the environmental impact statement and business case for raising the wall by 10 metres, which will require approval by the NSW Department of Planning, Industry and Environment, won’t be completed until mid-2021, according to WaterNSW.

Community consultation including the negotiation of compensation to impacted landholders, such as Bigga Fishing Club and Grabine Road residents, also needs to take place prior to raising the wall.

Meanwhile, a NSW upper house parliamentary inquiry into why Wyangala Dam, Mole River Dam and Dungowan Dam were recently identified for fast-tracked projects by the NSW Government has begun.

A planning and environment committee is leading the inquiry into the need for the projects, including reviewing the historical allocation of water and consideration of other options for ensuring water security in inland regions.

Committee chair and NSW Greens MP Cate Faehrmann told Region Media that a project of this size should not commence without an environmental impact statement.

“No-one has seen a business case for this expansion,” she said. “It’s troubling, to say the least, that the government has fast-tracked a project with such potentially severe consequences for downstream communities. That’s why we’ve established this inquiry.”

The committee will report its findings by 22 March, 2021. However, Ms Faehrmann said the committee could make interim recommendations given the projects are moving ahead.

“The public deserves to know why the government has chosen to fast-track these projects that will capture a combined 770 gigalitres from the Murray-Darling basin, significantly impacting downstream communities as well as fish populations and wetlands,” she said.

“There are growing concerns that these projects won’t deliver enough water to where it’s needed the most to justify the costs or the impacts on rivers, wetlands and downstream communities. This inquiry will have the powers to ensure everything is on the table, including business case assumptions and contracts behind all projects.”

WaterNSW anticipates final approvals from the NSW and Commonwealth governments between June and September 2021, which would allow work to start in late-2021.

Engagement of local residents in Bigga, Reids Flat, Woodstock and Darbys Falls is due to take place in September 2020.

The Wyangala Dam wall raising project was identified in WaterNSW’s 20-year Water Infrastructure Study and was selected due to its initial feasibility study and ability to provide the Lachlan Valley with greater water security.

By raising the wall, the dam’s water storage would increase by 650 gigalitres and also support irrigated agriculture in Cowra, Forbes, Condobolin and Hillston.

Mr Barilaro said the project would also create “immediate employment and economic benefit at a crucial time for regional NSW”.

A Water Supply (Critical Needs) Bill 2019, introduced to the NSW Legislative Assembly by Minister for Water, Property and Housing Melinda Pavey, meant dam upgrades could be assessed as Critical State Significant Infrastructure and their approvals could be fast-tracked.

Work has also been pushing ahead since Mr Barilaro’s promise to the Wyangala Dam project on 3 February, 2020, of “shovels in the ground later this year”.

While the required approvals prevent the construction of the heightened wall from beginning, work to move the holiday park and the creation of access roads can begin.

Submissions are being received by the inquiry into the rationale for, and impacts of, new dams and other water infrastructure in NSW until 22 September.