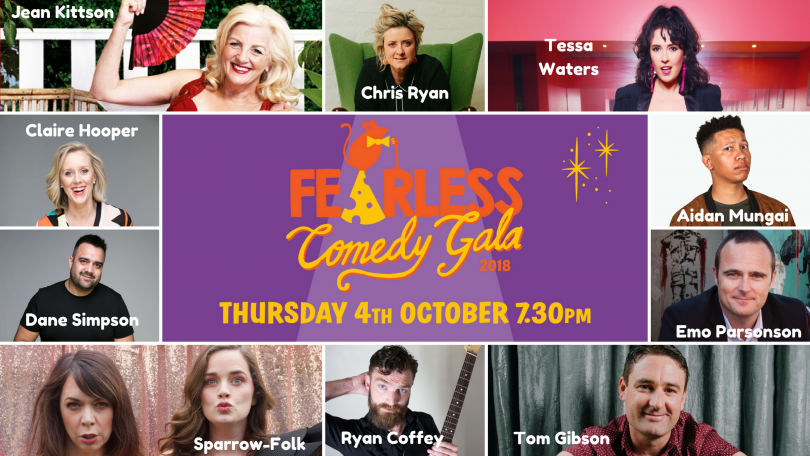 Talented comedians from across Canberra and beyond will converge on the Canberra Theatre Centre on Thursday 4 October, for the annual Fearless Comedy Gala.

Now in its third year, Fearless 2018 is set to be bigger and better than ever – with an assortment of acts guaranteed to deliver a night of laugh-out-loud, gut-wrenching, feel-good comedy for all.

This year’s show is hosted by the beloved Jean Kittson, and boasts a stellar lineup of comedians, including:

Juliet Moody, comedian and founder of Fearless says, “Being our third year, we decided to shake things up a bit and invite new people to come on board. The result is an incredible mix of stand-up, physical and musical comedy acts, offering a great night of comedy for a good cause.”

Proceeds from this year’s event will be donated to Toora Women’s Inc, and the Domestic Violence Crisis Service (DVCS). Juliet, who is herself a survivor of domestic violence, started Fearless to help raise money for a cause that is close to her heart.

“Last year we were able to donate almost $40,000 to DVCS and Toora Women’s Inc. Toora has a number of specialist programs for children and teenagers affected by domestic violence, so it’s a lovely match that ensures they get the support they need.”

All of the artists donate their time to perform at the Fearless Comedy Gala, with sponsors such as Bendigo Bank offering financial support to cover their expenses, and other running costs of the show. 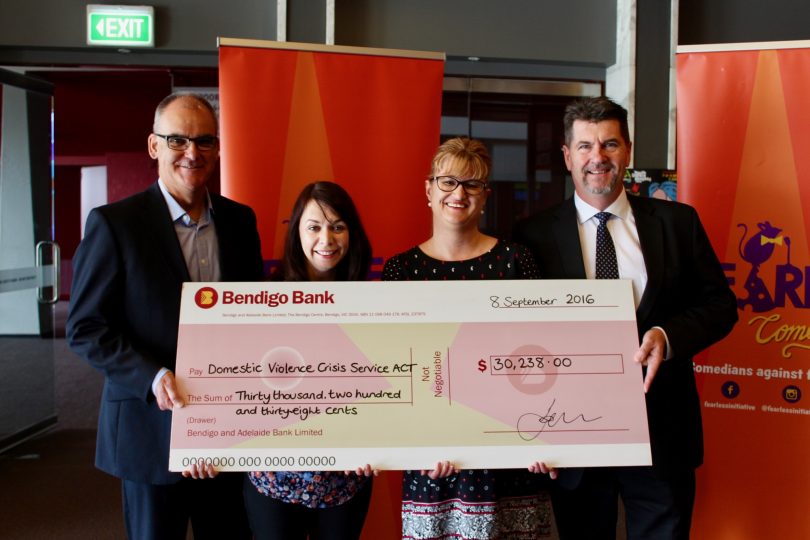 “We couldn’t do this without the help of our comedians and our supporters, and I’m so grateful to Bendigo Bank, as they were our very first sponsor. I went to them with this crazy idea three years ago, and it was their help that allowed me to get it off the ground.”

Fearless Comedy Gala is giving you and a friend the chance to win a VIP, all exclusive back-stage pass to mingle with the stars of the show. To enter, simply buy a VIP ticket valued at $79 (includes a seat at the front, drink, program and gift) before the 21st of September.

Fearless Comedy Gala is on Thursday 4 October at 7:30 pm. Tickets start from $39 and can be purchased in person or online from the Canberra Theatre Centre.

Darron Marks - 49 minutes ago
When the construction moves so will the priorities for Government to build new infastructure. And it would have been the same... View
News 18

Jason Preston - 2 hours ago
Buying your vote with your kids View
Jesse Mahoney - 6 hours ago
Y'all are arguing with someone who likes Pauline Hanson. I wouldn't waste your energy View
John Hartley - 6 hours ago
Labour drunk on money till there is none left then tax go up there a joke and have and will be for a long time View
Lifestyle 8

Jess Peil - 4 hours ago
This is so exciting! View
Roland De Saxe - 6 hours ago
Great idea for Eden area View
Talla Mc Bogan - 11 hours ago
happened in the otways ,, mountain bikes took the moto tracks ,, they only use a small area though ,, so plenty of moto track... View
Property 3

Scott Humphries - 9 hours ago
"Braddon of the south" . So the light industry and commercial businesses will eventually be pushed out by apartments, just as... View
Marc Edwards - 10 hours ago
And 5 minutes later the residents will all start complaining of the noise etc. Some areas should remain commercial, not every... View
Jp Romano - 14 hours ago
A great area - great building and a great developer. View
Opinion 31

Charny Barney - 14 hours ago
Are there any more policy promises they are going to back flip on? Alistair's indecision and poor decision making is not a go... View
Sue Ellen - 19 hours ago
Elroy Jones Yes. It's one of the prettiest areas of the lake. It used to be nicer before they bulldozed all the trees on the... View
ACT Election 20