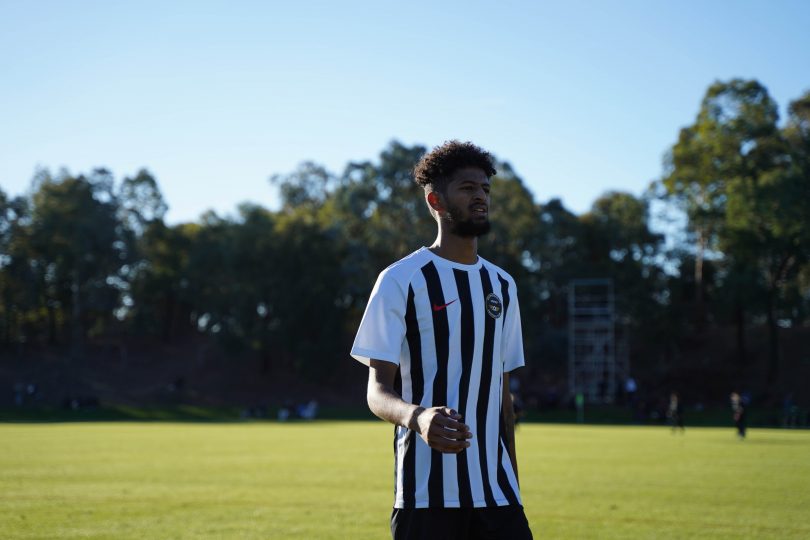 Twelve months ago, Jeremy Habtemariam admits he was stuck in the most frustrating time of his footballing career.

After the dynamic midfielder signed a mid-season transfer to eventual champions Canberra FC, complications out of his control arose, forcing the playmaker to not play a single game during the second half of the season.

He was forced to watch on as his teammates won the treble, but the most frustrating thing for the 23-year-old was not being able to play football.

The midfielder has now put the experience behind him and is running rampant with his new club Gungahlin United.

“Missing out on half of last year was the most frustrating time for me as far as being a footballer,” Habtemeriam said. “When I was presented with the chance to join Gungahlin when they contacted me, I just thought it was the best offer for me.

“I went there because I wanted to improve as a footballer and I think putting aside last year and everything that happened, the main priority was to get back into it because I did not play for so long.”

Habtemariam has been one of the main focal points in attack for Gunners this campaign after notching six goals in eight games, with the midfielder crediting his form to building strong relationships with his teammates.

“I think consistency and playing in a system which pretty much allows someone like me to be able to do what I can to help the team,” he said. “I think having the players that we do makes things easier to get a bit of chemistry and build those connections on the field. Great teammates and consistency the key to his success.

“It has been a great season for me just because we are all enjoying ourselves so much as a team.”

While it may look like he is under a resurgence this year, Habtemariam has not seen it in that way in the slightest and he is just happy to be playing in a team that is continuing to push up the competition table.

“I would not say it is a resurgence,” he said. “There are a number of players in our team this season that are playing top level in the league. I think the system itself, the coaching and the team we have allows everyone to shine.”

Gungahlin United look to continue their rich vein of form against Canberra Olympic this Sunday (30 June), with the mouthwatering matchup between third versus second respectively in the NPL1 standings.

Marcial Munoz’s men are looking to secure five victories in a row and close the gap on Olympic and are desperate to continue their momentum after demolishing Canberra FC 5-0 in the side’s last outing.

Olympic on the other hand, head into the encounter looking to rectify their disappointing 2-0 loss to the same opponents in their last match.

Gungahlin’s only loss this season came from Olympic back in round two of the competition when Frank Cachia’s men ran out 2-0 winners.

Linda Stapleton - 1 minute ago
Hans Dimpel I will await the inquiry into the inquiry of the inquiry, before making up my mind. View
Linda Stapleton - 4 minutes ago
Might I suggest that the review can come up with what ever opinion they choose, but the opinion of voters is more important.... View
Robert Cox - 2 hours ago
"...it was overall an effective way to have stimulated the ACT’s post-lockdown economy" is an odd way to define "inconclusi... View
Community 30

Joshua F. Johnson - 23 minutes ago
Jenny Lawrence a blank canvas is the easiest to paint on View
Ben Phillips - 37 minutes ago
There’s about 20 acres sitting unused next to Lyneham primary. Mixing in some high density housing (units) with community p... View
Jenny Lawrence - 52 minutes ago
Joshua F. Johnson any form they take, including the current one, closes off some uses - that's not an argument not to conside... View
News 2

JS9 - 1 hour ago
The solution is relatively simple. Its called petrol stations becoming EV stations, which in a lot of areas will be the solut... View
Elf - 2 hours ago
Reality is, at the moment these are ok as a second car. If you want to be able to travel, there is no infrastructure to enabl... View
Opinion 9